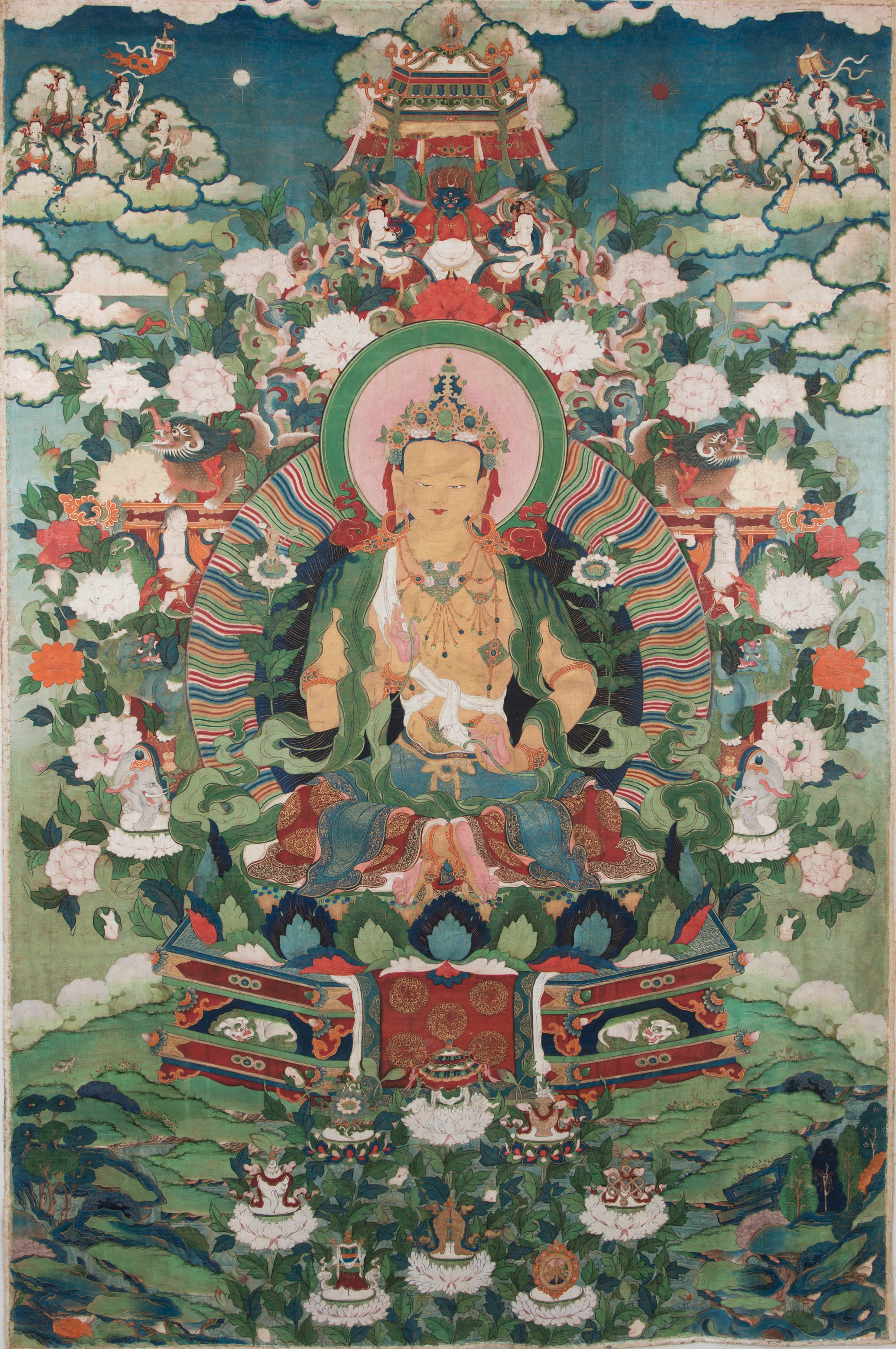 This painting of Vajrapani belongs to a set of nine works showing the Eight Great Bodhisattvas, along with the central figure of the Shakyamuni Buddha or the Amitabha Buddha.

In this depiction, Vajrapani is gold in colour, which reflects the preference of either the donor or the artist. In peaceful guise, this deity is often painted in green or blue, but there are no iconographic rules for showing the bodhisattva figures of the Mahayana sutras. There are, however, certain conventions that were adopted over time, which can also vary from region to region. The only way to identify Vajrapani is if he is holding a vajra scepter or has one close at hand. In this composition, he grasps the stems of two flowers blossoming at his shoulders. On the flower on his right-hand side, a vajra stands upright, balanced at the centre of the blossom. The deity’s two hands are shown in a relaxed gesture, in vague imitation of the dharma teaching mudra. He wears lavish jewellery and heavenly, multicoloured garments with different patterns. His legs, crossed at the ankles, are placed in a posture of ease. A coloured halo and rainbow nimbus surround his body.

Seated on a decorative throne platform, an elaborate torana extends to his sides and upwards. A torana is a structure like a gate, a gateway, an arch, a throne-back, a backrest or a decorative niche surrounding a deity, a god, the Buddha, a bodhisattva, a religious hierarch, a teacher or a saint. The word torana derives from Sanskrit, and is commonly used as the term to describe the stylised decorative framework surrounding sculptural and painted figures in Indian art, specifically, and in Asian art, in general.

The torana here is known as one of the Six Ornaments, and follows a late Tibetan style popularised in the seventeenth century. The ornaments refer to the figures of an elephant, a lion, a sharabha (a mythological, eight-legged, part-lion and part-bird creature), a boy, a part-terrestrial part-aquatic creature known as a makara and a naga (a serpent deity), and are topped with a garuda (a legendary birdlike creature). An elaborate and decorative canopy is placed at the very top.

Symbolically, the Six Ornaments have many meanings, such as ‘the seven things to be eliminated on the path, the six perfections, the four gathering things, the strength of the ten powers, the stainless and the clear light’ (Thubten Legshay Gyatsho, Gateway to the Temple: Manual of Tibetan Monastic Customs, Art, Building and Celebrations [Kathmandu: Ratna Pustak Bhandar, 1979], 46).

At the top of the composition are clouds supporting heavenly musicians and offerings to the gods and goddesses. In the foreground are the Eight Auspicious Symbols, each standing upright on a lotus blossom surrounded by a verdant landscape.