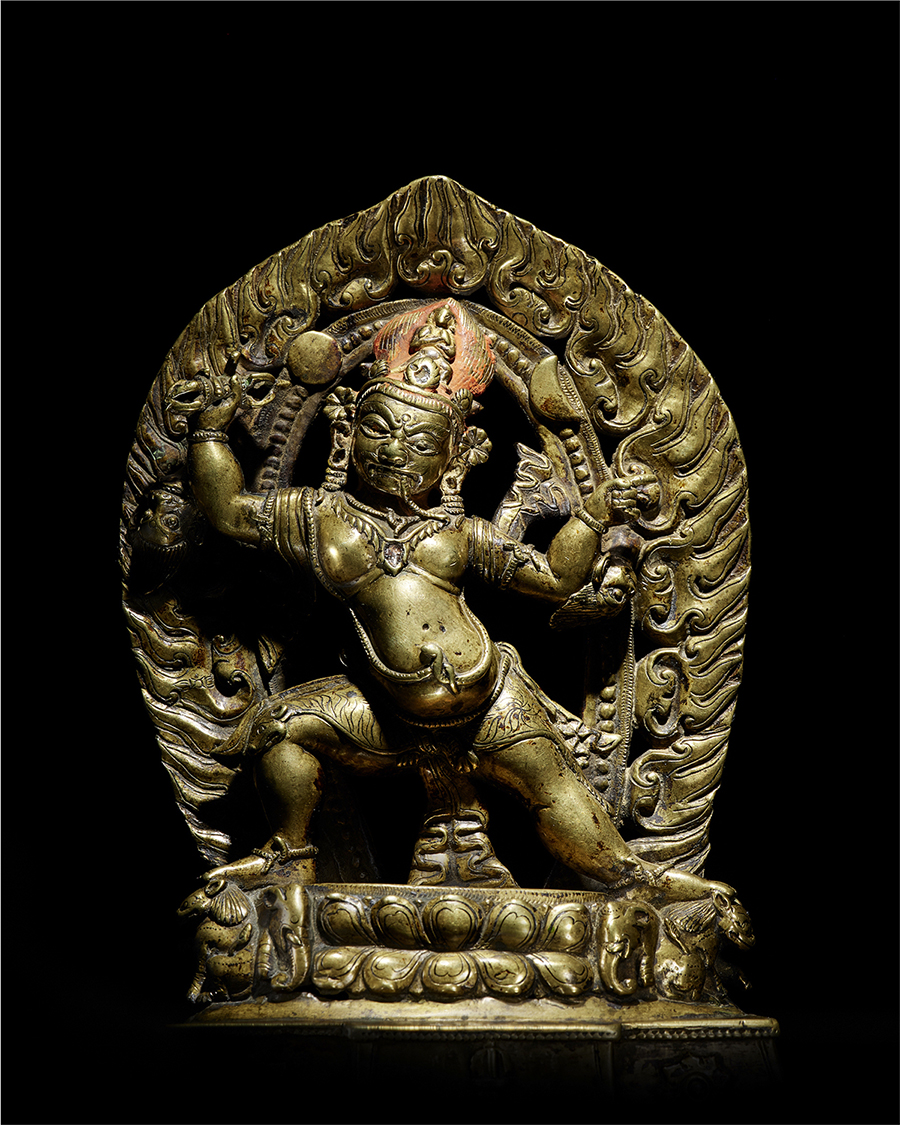 This wrathful form of Vajrapani holds the thunderbolt sceptre (vajra) aloft; his left hand assumes the threatening gesture (tarjani mudra). The tigerskin-clad figure moves to the right in pratyali dha, his feet held firm on the backs of elephants and lions. Two severed heads are attached to the flaming prabhamandala, as are emblems of the sun and the moon. Snakes adorn his ankles, waist, neck, upper arms and ears; a serpent makes its way into his mouth. Simulating both the shape and colour of a flame, the god's upswept hair frames a figure of the deity Samvara. His deep-set eyes are inlaid with a white metal.

Vajrapani assumed many iconographic forms throughout his long history, including that of 'Great General of the Yaksas' and one of the many manifestations of the bodhisattva Avalokitesvara. In one section of the ca. mid seventh-century Sarvatathagata Tattva Samgraha, Varajpani is seen as a bodhisattva in his own right, who essentially refuses enlightenment, reiterating his vow to assist sentient beings. Like other advanced bodhisattvas, Vajrapani could assume any form–including terrifying ones–as an expression of the skilful means (upaya) by which he assists sentient beings. In the same tantra, Vajrapani declares himself 'consecrated by you [the Tathagatas] as the wrathful suppressor of all evil ones.'

This work is another example of the Tibetan sculptor's adaptation of eastern Indian prototypes–clearly the inspiration behind this image and the source of all its decorative devices. The pedestal with a projecting central section has antecedents in eastern Indian medieval sculpture, although the eastern Indian examples usually incorporated feet to elevate the base, a feature not typically employed by Tibetan sculptors. Moreover, in place of the normally plain or decorative floral motifs on eastern Indian pedestals, the Tibetan artist has emblazoned potent symbols of the faith: the thunderbolt sceptre (vajra), and the wheel of the Buddhist law in its form as an eight-spoked 'wrathful weapon wheel' (T. drag po'mtshon cha 'khor lo). The lotus petals are also rendered in a manner that is rooted in eastern Indian medieval works, as are the lions, the necklace and the folds of the sash ends. In short, the Tibetan sculptor has infused eastern Indian sculptural elements with a sense of drama and spontaneity, seen particularly in the flames of the halo, which are positively ablaze.