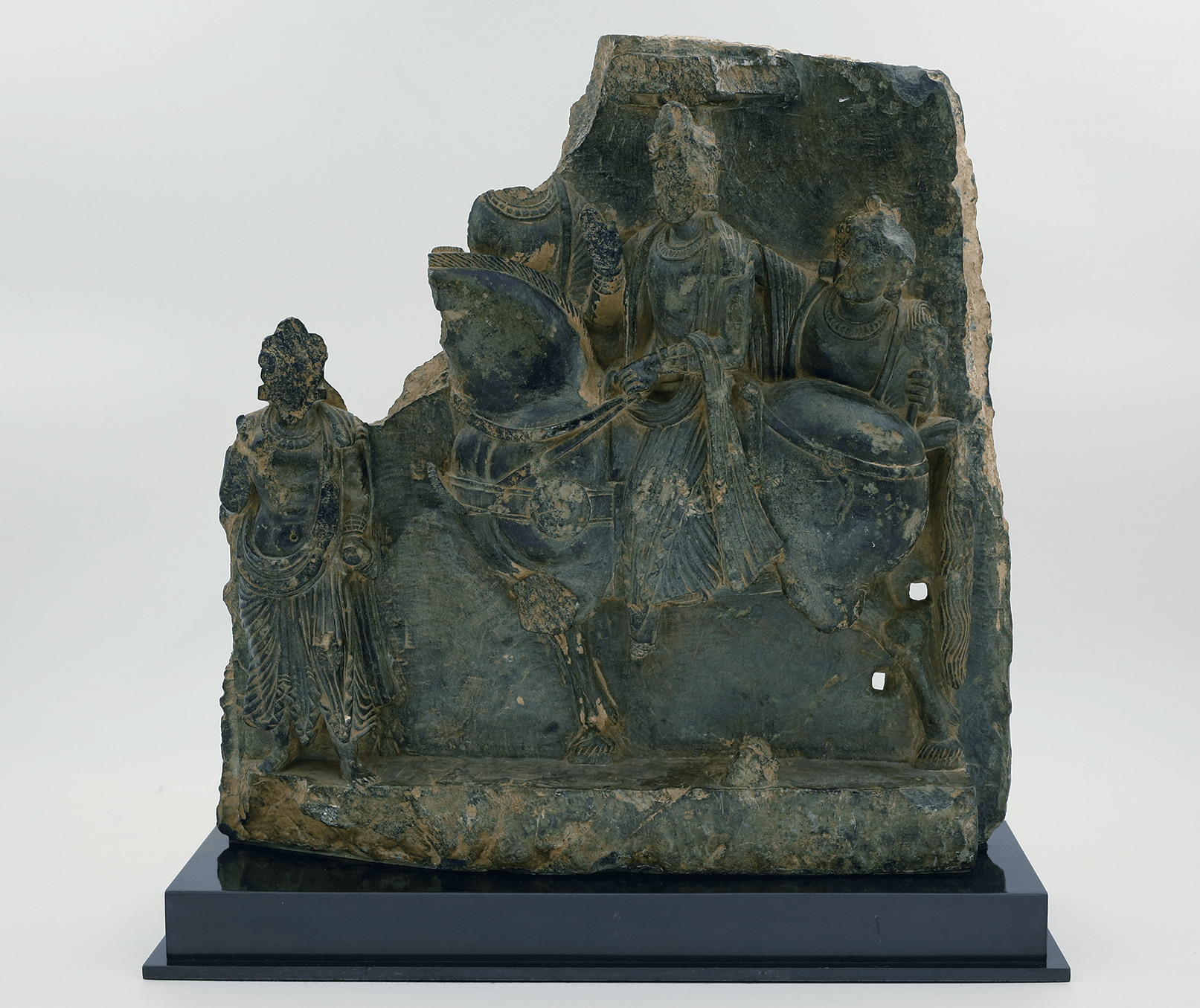 This sculpture is a fine example of Gandharan art, which flourished in the north-western region of the Indian subcontinent or parts of modern-day Afghanistan, Pakistan and India between the 1st and the 5th century CE. Gandhara art reflects a crossroad of civilizations and cultures that prospered during that time, and is a symbolic amalgamation of the artistic styles of the East and West.

Between the 1st century and the 3rd century CE during the Kushan period, Buddhist art enjoyed a surge in prominence, resulting in two major art schools: Gandhara and Mathura. The Gandhara school harmonized multiple styles from various regions, including Indian, Parthian, Scythian, Greco-Roman, and Bactrian influences. The dynamic result of Gandhara has made a lasting contribution to Buddhist art and iconography. Part of the art period’s significance is that the Buddha is depicted in his human form for the first time, inspiring his later representations. The Gandhara style is also known for its accurate depiction of anatomy, dense drapery, and idealistic features.

This relief is carved in grey schist – a material often used in Gandharan sculptures. It depicts one of the most significant episodes from the life of Buddha: the scene of Prince Siddhartha’s (Buddha before attaining enlightenment) renunciation of the world after witnessing the three inevitable stages of life (sickness, old age, and death). Siddhartha’s realization of the unavoidable nature of pain and sorrow, and the illusory and fleeting nature of the world, prompts him to seek a way out from this vicious cycle of suffering toward a path of peace and happiness. This episode is called mahabhinishkramana or abhinishkramana, which translates to ‘The Great Departure’.

The sculpture is a beautiful example of the mahabhinishkramana episode in which Siddhartha can be clearly seen sitting atop his horse Kanthak, followed by his charioteer Chhandaka. Siddhartha is adorned with jewellery and clad in characteristic Gandharan drapery, similar to the other two figures also depicted in the scene.

- Riddhi Garg, an independent research writer and editor based in New Delhi, India.

The sculpture depicting Mahabhinishkramana – the great departure or the renunciation of Siddhartha, is one of the finest examples of Gandhara art. The work shows various details of the image from different angles, carved in gray schist. The sculpture depicts Siddharta riding his horse Kanthaka, out of his palace and being followed by his charioteer Chhandaka or Chhanna, the character shown with a parasol, which is now broken, in his hands, behind the rider.

The sculpture reveals very mature Hellenistic understanding of anthropomorphic as well as the zoomorphic anatomy. It reflects the competence of the sculptor. Unfortunately,the horse’s head and the faces of all the four human figures are mutilated. Some portion of Chhandaka’s face is visible though not clearly. The eyes of this face and schematized treatement of the garments, the patterns formed by the folds do not conform to Hellenistic norms. Instead they divulge an affinity to Mathura-Kushana rendering. The wavy, vertical lines on the tail of the horse also support this observation. Taking these aspects in consideration, the image can be placed in the 2nd C.E.