Following his first sold-out solo exhibition in 2008 and a run of acclaimed group shows from Beijing to Tel Aviv and Santa Monica, Nortse returns to Rossi & Rossi with 18 new mixed media paintings, along with a video work and an installation. Part of an exciting generation of Tibetan artists who repurpose traditional Tibetan motifs to confront the erosion of Tibetan culture and its “redevelopment” under Chinese hegemony, his work is critically assessed in a full-colour catalogue accompanying the exhibit, featuring an essay by HG Masters, a freelance writer and editor-at-large for ArtAsiaPacific.

Bandaged Landscape exemplifies another new turn in Nortse’s artistic approach. He says, “For me, ‘duplicating’ myself is a very painful experience, which makes it difficult to continue using any one method for very long.” In contrast to his first solo show with Rossi & Rossi in 2008, Self Portraits - The State of Imbalance, Nortse now adopts a macroscopic view of issues facing Tibet and Tibetan identity using an expanded repertoire of new media. “My main subject this time includes the concern over losing one’s traditional culture, the change of faith, and environmental issues.” In Zen Meditation, the show’s commanding installation, Nortse places dark metal frames around six bodiless monastic robes, a powerful evocation of the duress felt by many Tibetans as the central government’s control of religion increasingly threatens their core identity.

The works in Bandaged Landscape are technically brilliant, politically poignant, and sensitive. Nortse draws upon an artistic tradition rich in iconography to code his paintings with political, social, and environmental commentary. “For myself, art is no longer just the accomplishment of an aesthetic practice, nor is it a visual game to play. Art is a sense of responsibility, an alerting and self-saving device.” In Wishing You Good Fortune no.2, a fragmented Buddhist deity projects a stark vision of the forced exchange of traditional culture for modern comforts. A shiny, empty can serves as a substitute for the icon’s medicine bowl, alluding to the exploitation of Tibet’s rich mineral resources. Its right foot wrapped in hospital bandages, its head replaced with Chinese renminbi bills, the broken deity stands in for the collective trauma of being forcibly subsumed under a foreign conception of progress.

ABOUT NORTSE (NORBU TSERING) Born in Lhasa in 1963, Nortse attended various art schools between 1980 and 1991, including Tibet University in Lhasa, the Central Arts Academy in Beijing and the art academies in Guangzhou and Tianjin. His work deals with issues which are as relevant to Lhasa as to London and the rest of the world: global warming, environmental degradation, overpopulation, and the desire to form one's own identity in a world of mass media and eroding local culture and tradition. He has exhibited in Beijing, London, Lhasa, Königswinter, New York and Santa Fe, and is held in collections worldwide. He is a member of the Gedun Choephel Artists Guild in Lhasa. 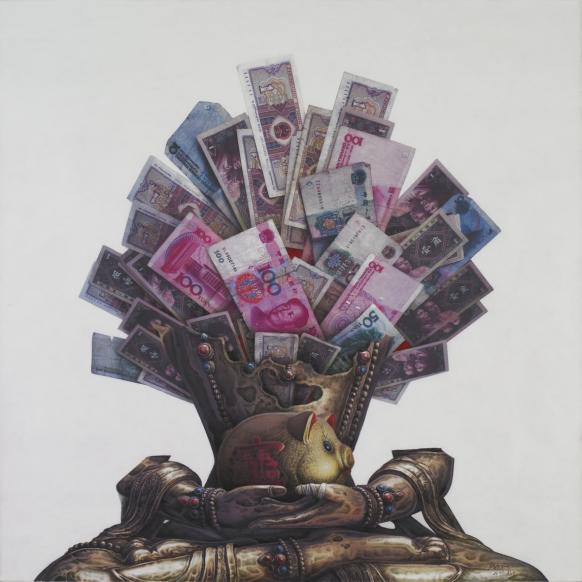 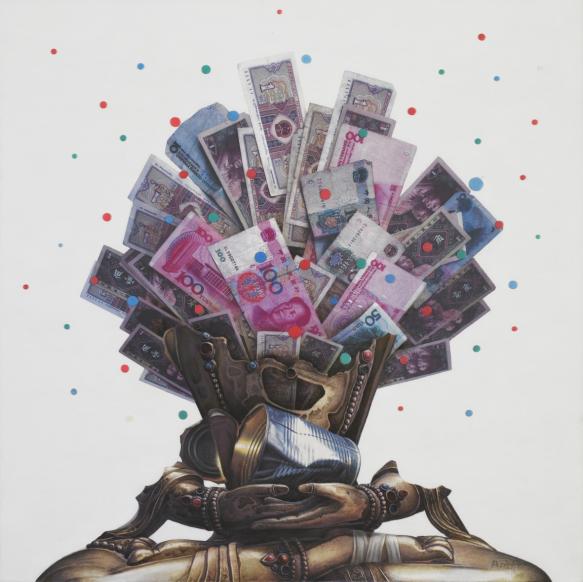 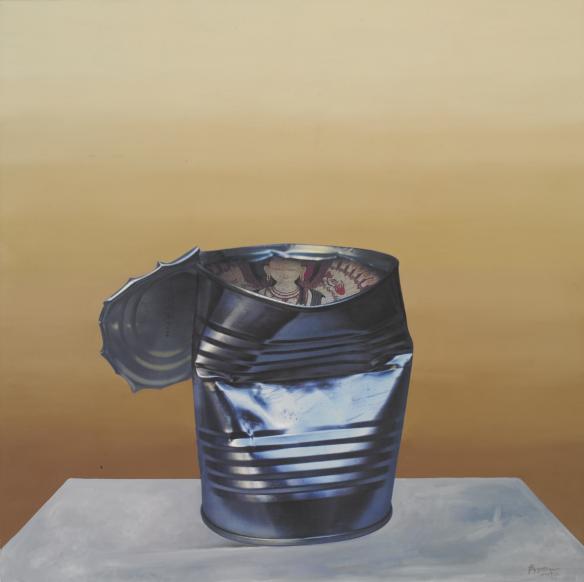 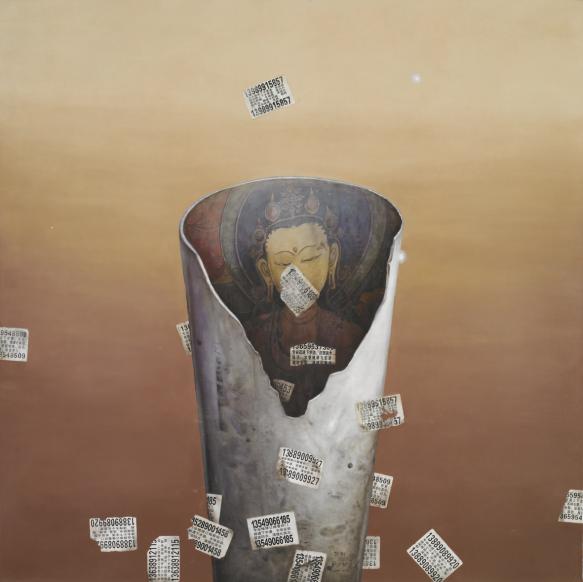