Between Spirit and Magic

Between Spirit and Magic brings together the works of six artists living in the United States who trace their origins to India, Pakistan and Iran. Their practices slip between mediums, but retain decorative, feminist preoccupations that are grounded in their identities. Ranging from the tightness of traditional forms in the work of Anila Quayyum Agha, Ambreen Butt and Jaishri Abichandani, to the surreal looseness of Ruby Chishti and Negar Ahkami, to the mysterious and magical realism of Rina Banerjee, the sculptures and two-dimensional works presented rely on process-based materiality to communicate in a visceral manner. Between Spirit and Magic is curated by Jaishri Abichandani.

Anila Quayyum Ahga is best known for her award-winning sculptural work that uses laser-cut metal to articulate traditional floral forms. Tear Drop – Aqua (after Robert Irwin) (2018), a two-dimensional suspended sculpture that creates intricate shadows, represents this aspect of her practice. Also included are three large embroideries incorporating metallic thread and gold beads onto handmade paper. These works are consistent with her concerns, as she has long explored sacred geometry and the circular form in various materials and dimensions. Alluding to feminist and South Asian aesthetic traditions, the delicacy of this body of work engenders primal anxieties about our survival.‍

Ambreen Butt’s series of prints titled Daughters of the East (2008) employ a muted palette evoking a dusty earth, in addition to formal framing devices and floral patterns, to depict figures of female devotees who were used as human shields by Islamic fundamentalists and killed by government forces in 2007 at the Siege of the Lal Masjid in Islamabad, Pakistan. Within Butt’s prints, five separate fragments come together to form a disjointed story. The violence of the original siege and massacre finds its release here in magical realism, a perfect container for the complex and conflicting ideologies of capitalism and religion, and their destructive powers. ‍

Jaishri Abichandani’s Holy Family (2015–18), one four sculptures presented by the artist, appears as a woman perched upon her lover’s lap, on a swing festooned with roses, each figure holding a child in her arms. There are clear references within the title and the work to divine heteropatriarchal families in mythologies and religions: Shiva-Parvati-Ganesha and Joseph-Mary-Jesus offer paradigms of how a family has looked for millennia. Her sculpture bears witness to multiracial lesbian families who are demonstrating what motherhood can look like without patriarchal hierarchies within the home. Queer love, desire and motherhood coexist here in forms that were not previously created by male sculptors. Inserting these loving, queer, Muslim bodies into the sculptural lexicon of holy figures simultaneously disrupts hegemonic narratives of contemporary art and those based in multiple religious fundamentalist ideologies, from Christianity and Islam to Hinduism and Buddhism.

Joyful, empowered, queer and feminist bodies dressed in pink recur also in Negar Ahkami’s paintings. Her Birth Rite (2018) offers a number of encrypted ideas, from its rigorous engagement with the historic language of paintings to its use of fragmented planes and patterns to its rendition of human bodies. An entranced, dancing female figure clad in pink in the foreground on the left is balanced by clusters of other performers, including the kneeling, warbling figure of Freddie Mercury, notes reverberating around his body like a force field. At once whimsical and masterly, Birth Rite conjures visions of paintings from across time, from The Starry Night (1889) by Vincent van Gogh, to Gustav Klimt’s symbolism.

The pathos and muted colours of Ruby Chishti’s installation The Present is a Ruin without the People (2016) evoke a melancholic palate that is echoed by the artist’s shared experiences with a generation of Pakistani women rigorously trained in traditional artistic disciplines who are evolving that aesthetic language to encompass their diasporic experiences as makers of contemporary art. Within Ruby Chishti’s work, the viewer is presented with what seems to be a forested, hilly landscape interspersed with empty window frames and made from mixed materials; the artist primarily includes recycled clothing, some of which once belonged to her mother. The emotional weight of these carefully selected, folded and sewn fabrics, along with their repeated layering, assumes the appearance of excavated soil sediments or terraced mountains, like markers of the passage of time.‍

Rina Banerjee’s work encompasses entire universes unto itself: surreal forms that hover between menace and beauty, organic and inorganic matter, microscopic and macroscopic visions of the world, found objects and fabricated structures coalesce into mysterious sculptures that require close reading to continuously reveal their complexity. Her work included in this exhibition, Jack Fruit Johnny she was a diasporic Devi changed her name to honey changed her faith to sunny, changed this sex to something funny, changed her city to New York City – all for reason to be far far away from misery and war for money (2015), is presented as an almost neo-shamanic object, glittering and nebulous, with the small, covered head of a black woman, a distended body and gigantic claws made of porcupine quills. The beguiling, luminous, interrupted surfaces in Rina Banerjee’s work are uniquely and wholly hers – few artists are able to thus synthesise their knowledge of biology, engineering, history, art and science, along with clearly culturally marked signifiers, to create such magical works that speak of the past whilst offering a hybrid vision of our evolution.

From quiet, contemplative works to brash and joyful ones, the art in Between Spirit and Magic strives to speak with a playful seriousness about deeper universal existential anxieties. 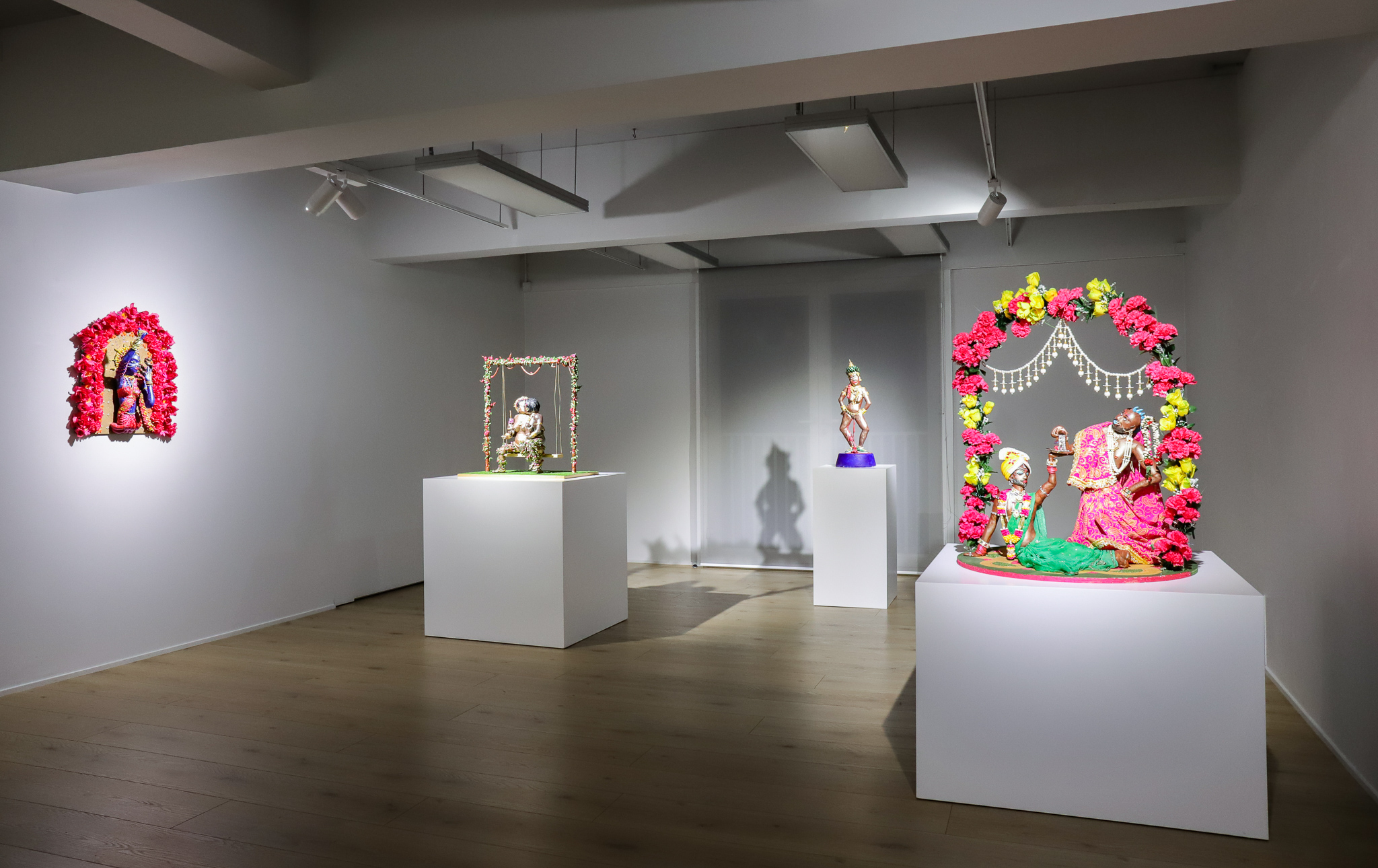 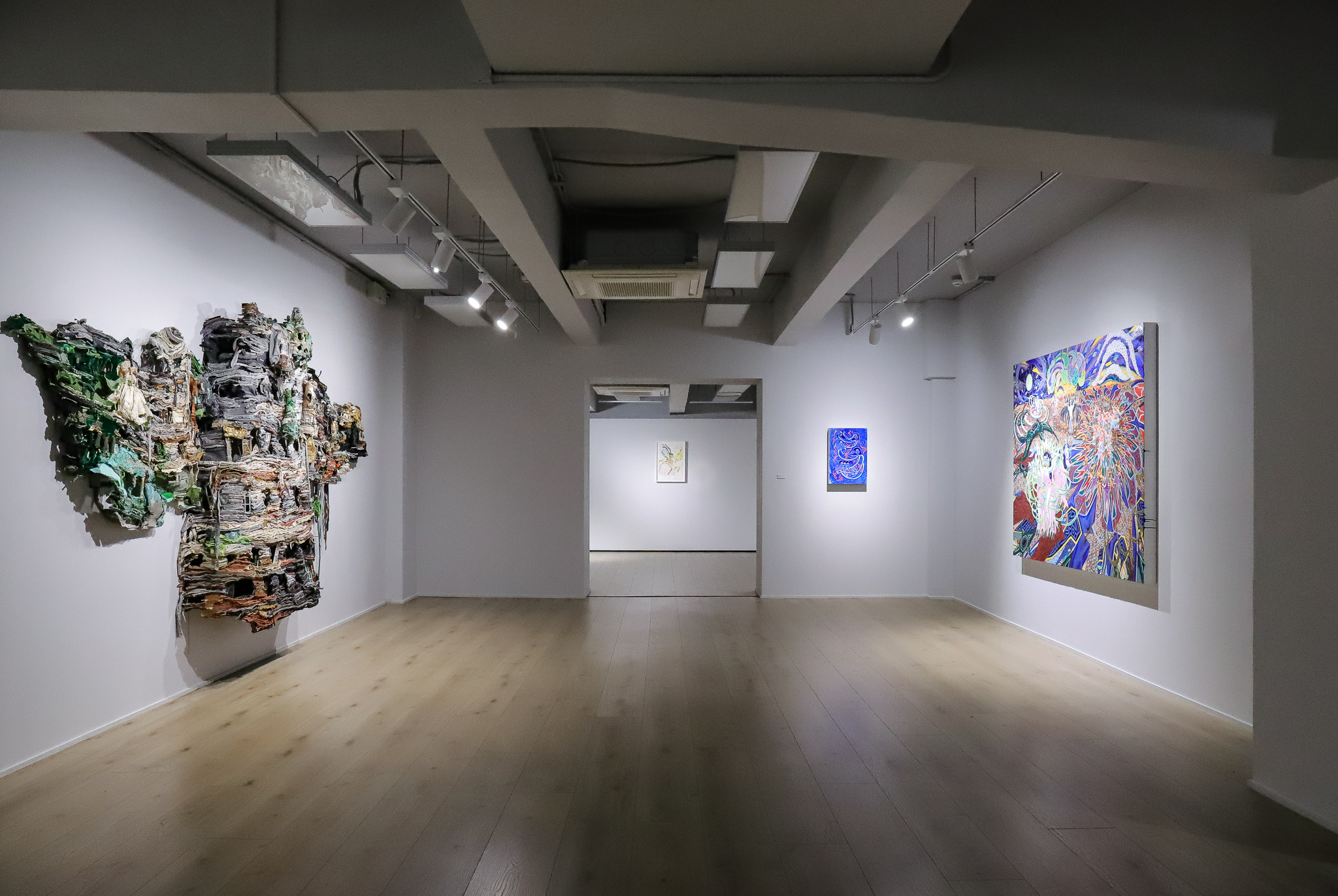 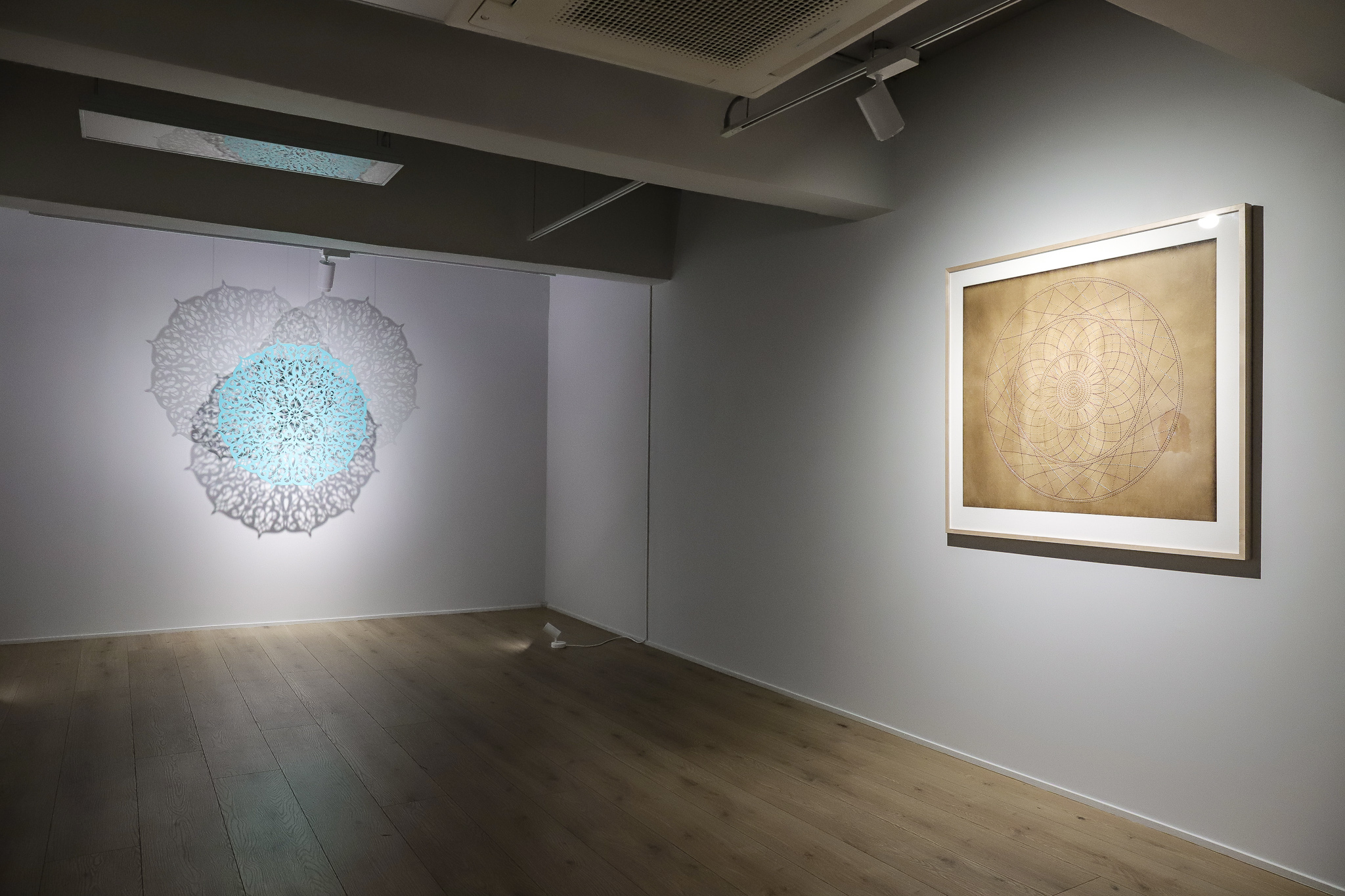 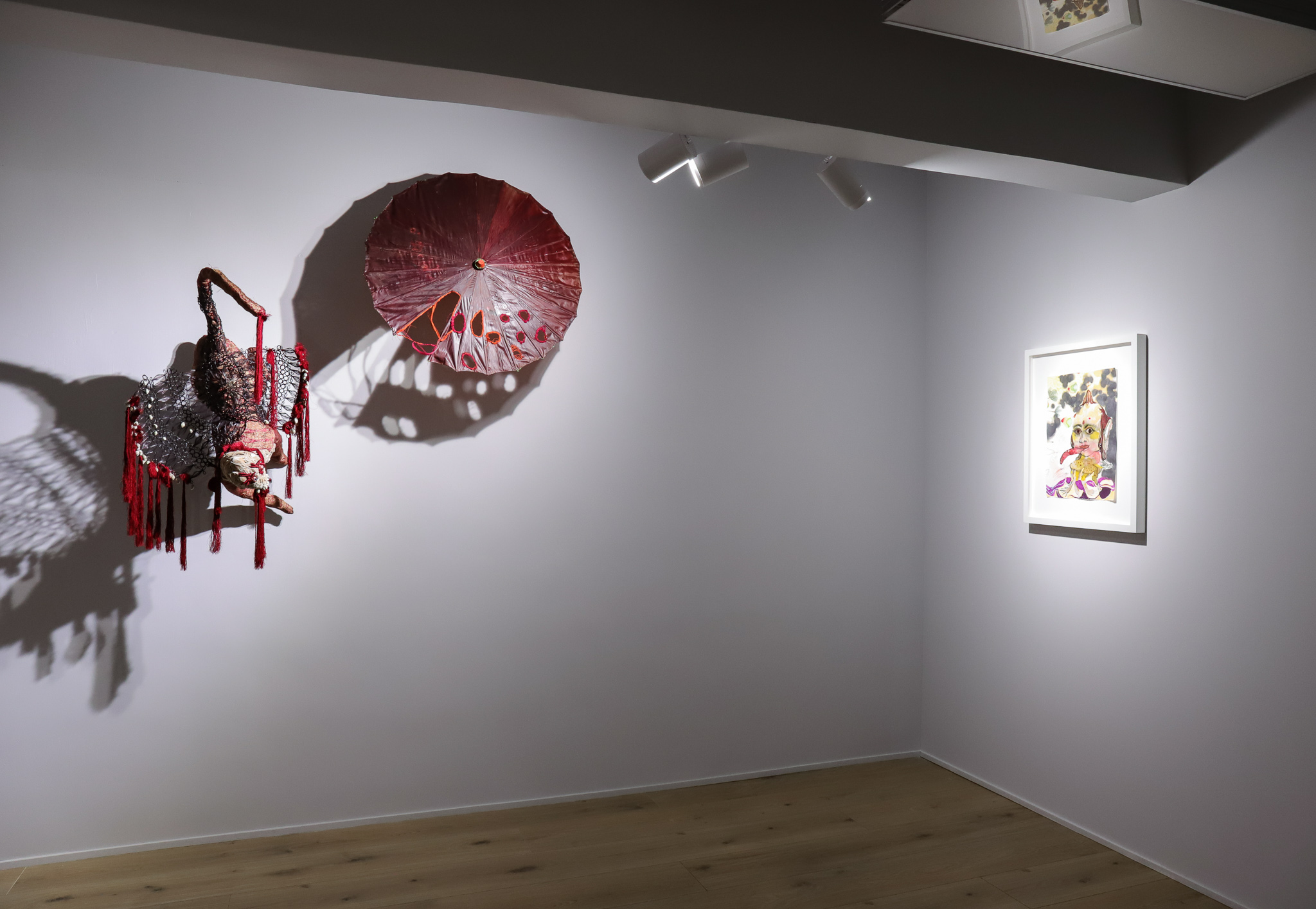 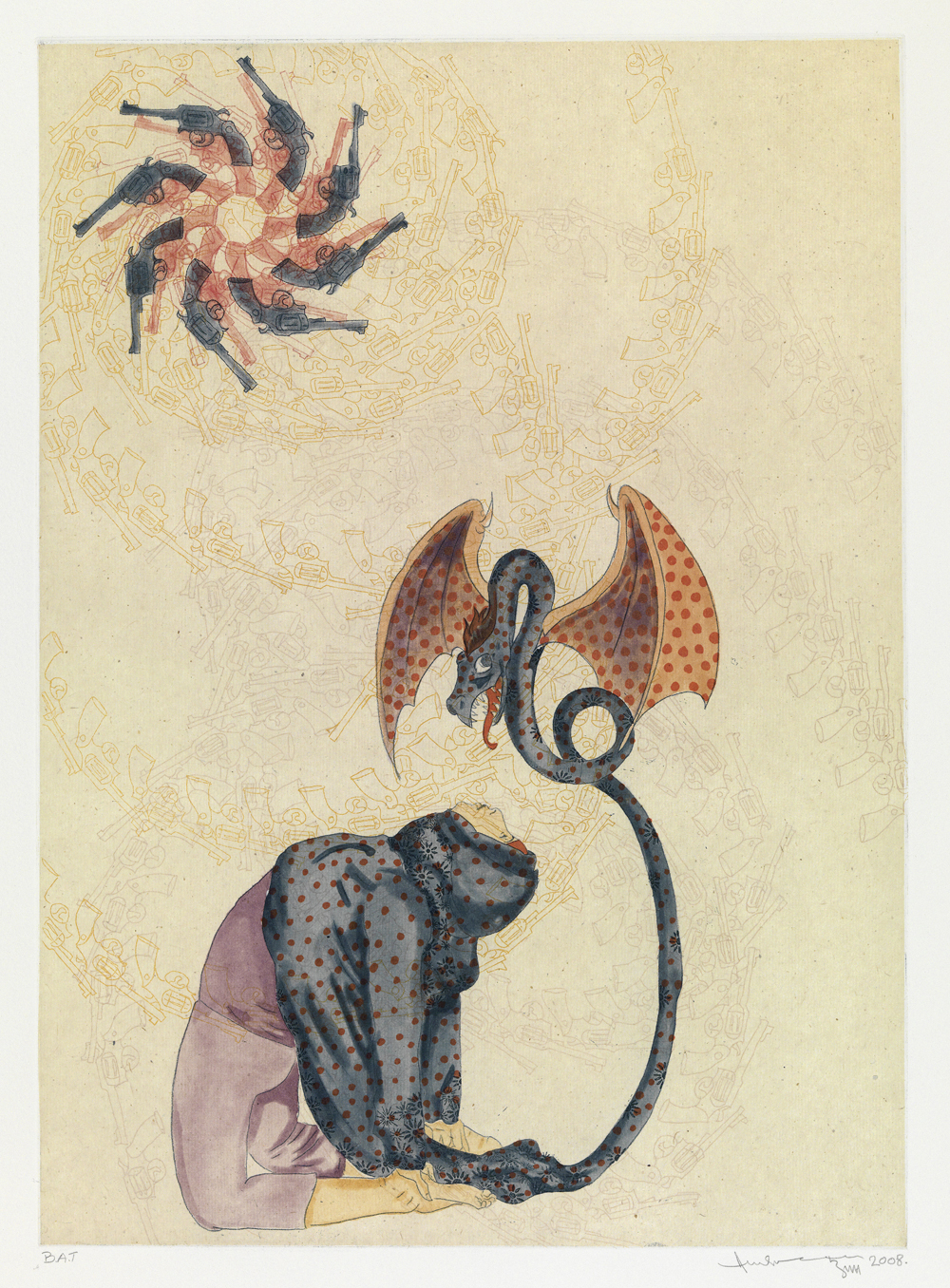 Daughters of the East 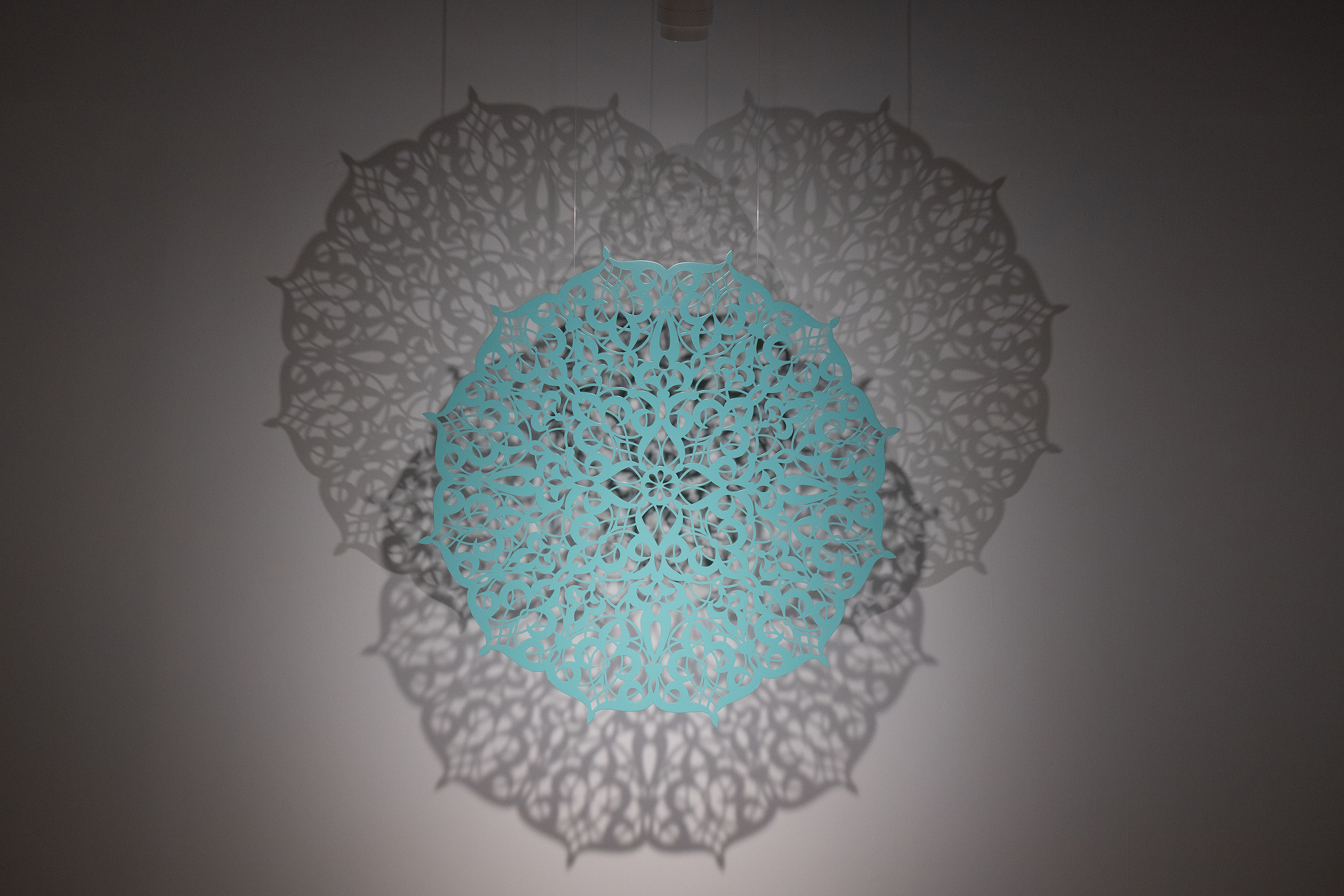 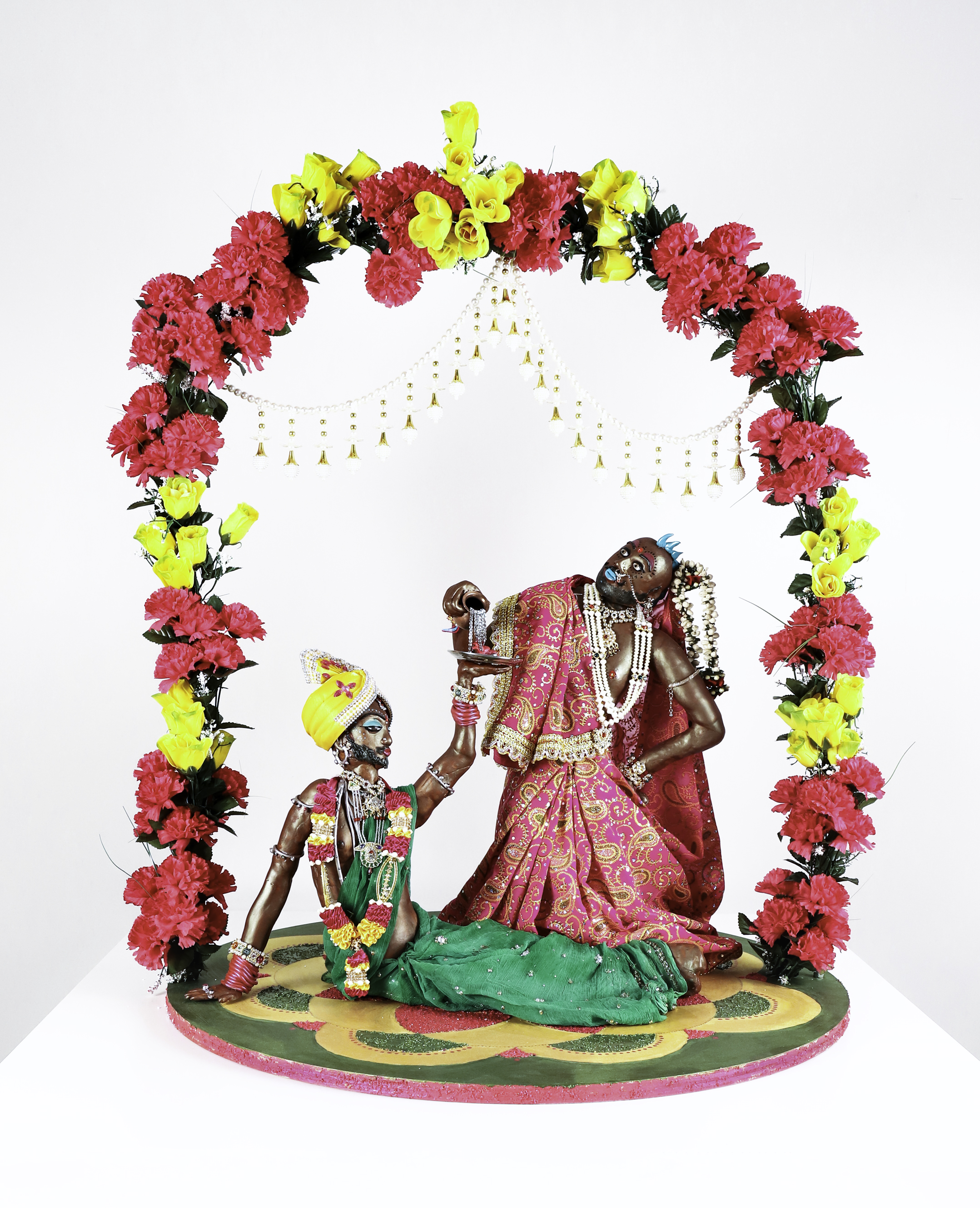 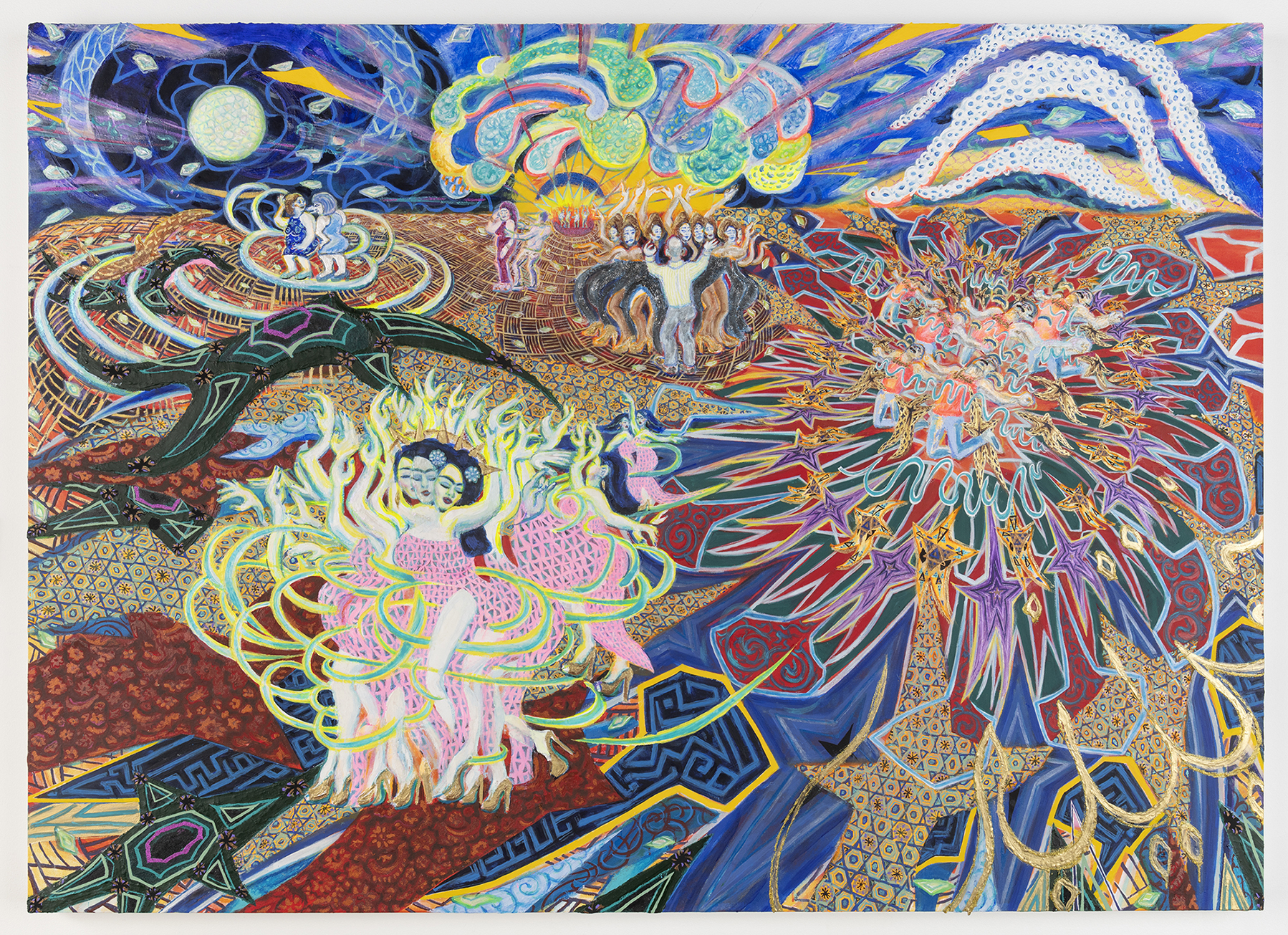 Gesso, acrylic and glitter on canvas, stretched over panel 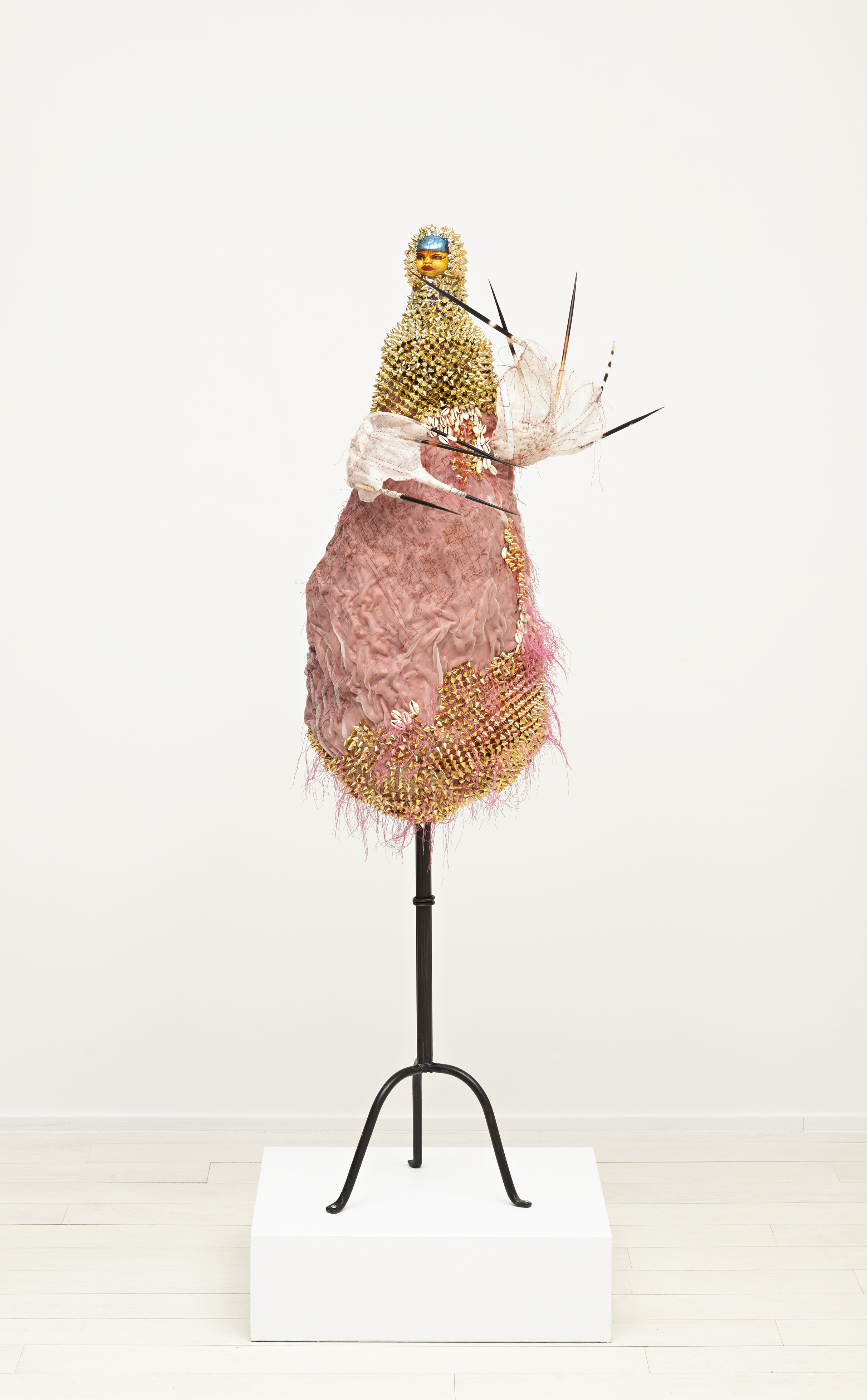 Jack Fruit Johnny she was a diasporic Devi changed her name to honey changed her faith to sunny, changed this sex to something funny, changed her city to New York City–all for reason to be far far away from misery and war for money 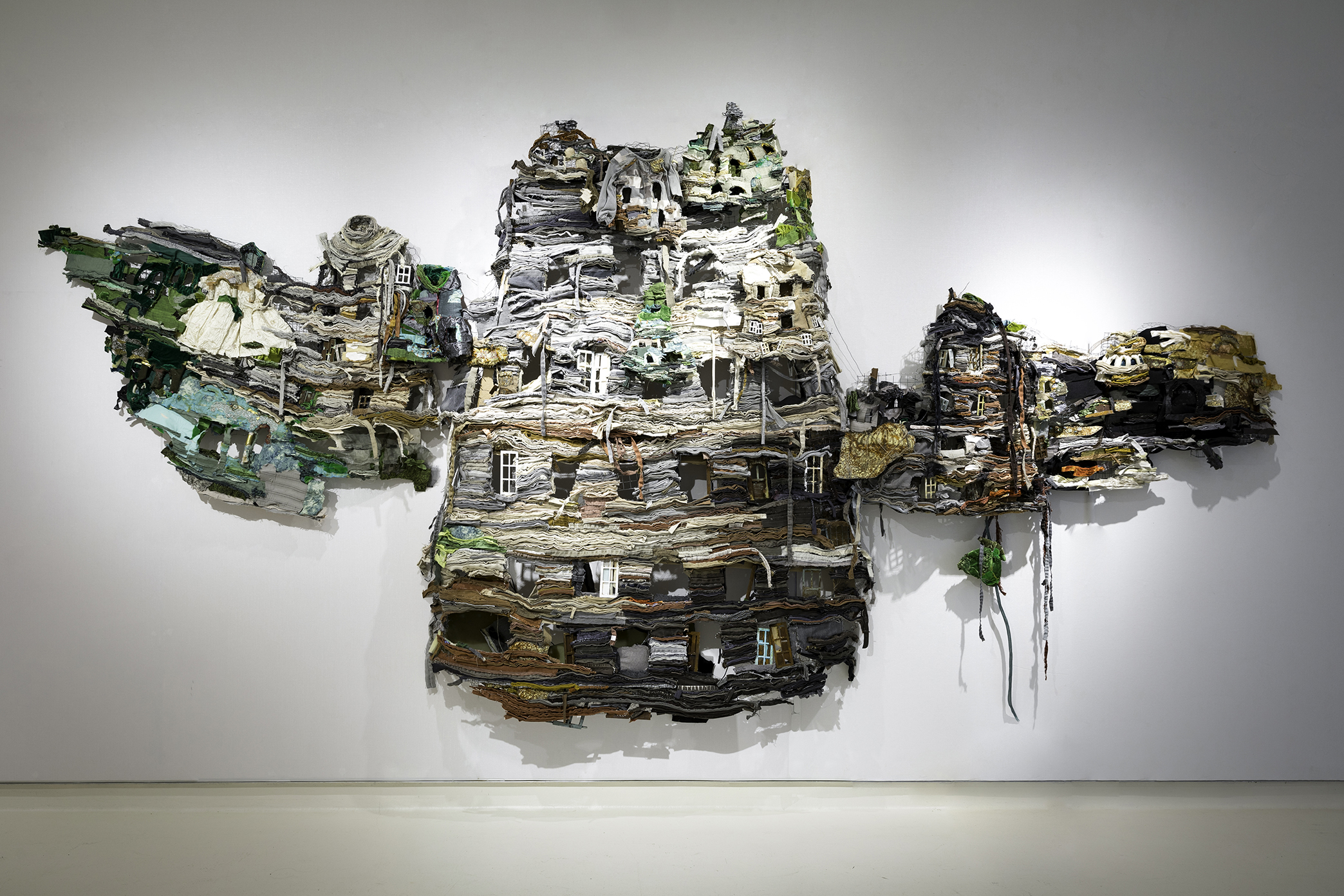 The Present is a Ruin Without the People