Heavy Skirt presents some twenty paintings and collages centered around a sculptural installation, all based on the theme of the skirt his mother wore during pregnancy and his infancy. Each work contains an allegory wrapped in the memories and personal narratives of Seckon’s childhood and chronicles an undocumented Cambodia. Within the omnipresent spectre of warfare and violence Seckon depicts, there is an irrepressible fire of the spirit and culture of the Cambodian people.

The painting Golden Flower Skirt presents a patchwork of grain silos, flowers and pagodas recalled by the artist as the “golden times” of childhood. The idyllic pastoral scene is overcast by the outline of an American aircraft which he recalls bombing a Buddhist ceremony, killing a monk in the process.

Whilst the recollection is visually lush and joyous, the plane’s shadow leaves an indelible and threatening mark.

The Singing Soldier depicts a visceral experience the artist had while viewing his first musical performance in 1982. At the climax of the concert a row of government soldiers who were providing security fired off a salvo of bullets above the heads of the crowd. Although no one was harmed, the event quickly dissolved into chaos. This memory, depicted through a collage of appropriated images and drawings of Cambodian and western pop singers, both past and present, fades almost cinematically into a drawing of an assault rifle juxtaposed next to the artist, dressed in military uniform, singing into a microphone.

As a final example, the installation Heavy Skirt (pictured), which anchors the exhibition, presents a skeleton dressed in a uniform constructed from materials signifying numerous roles in Cambodian society. Both hero and villain, he stands on a pedestal surrounded by the mother’s skirt. Representative of all Cambodians, he is nurtured and cared for by the mother only, inevitably, to grow and change over the course of life into someone she no longer recognises. 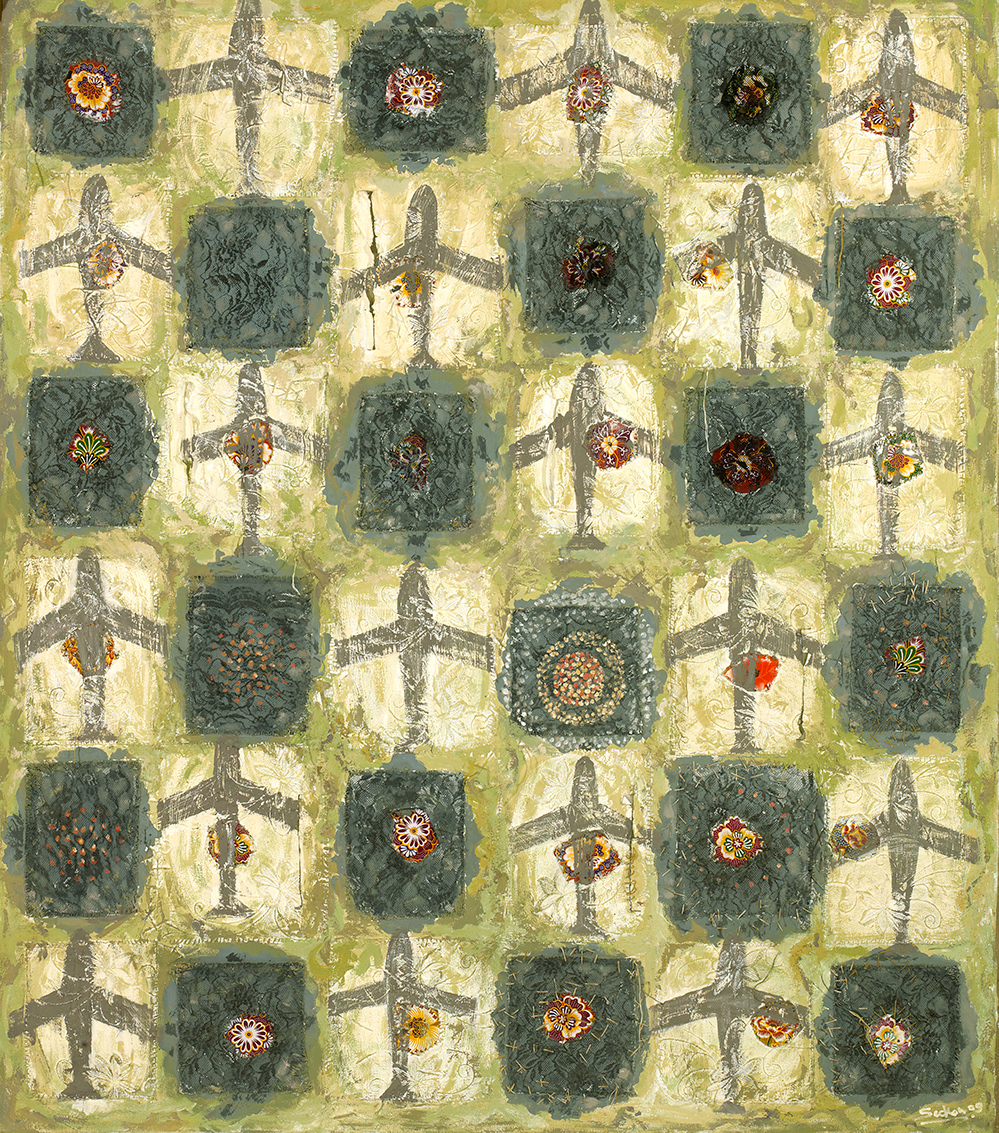 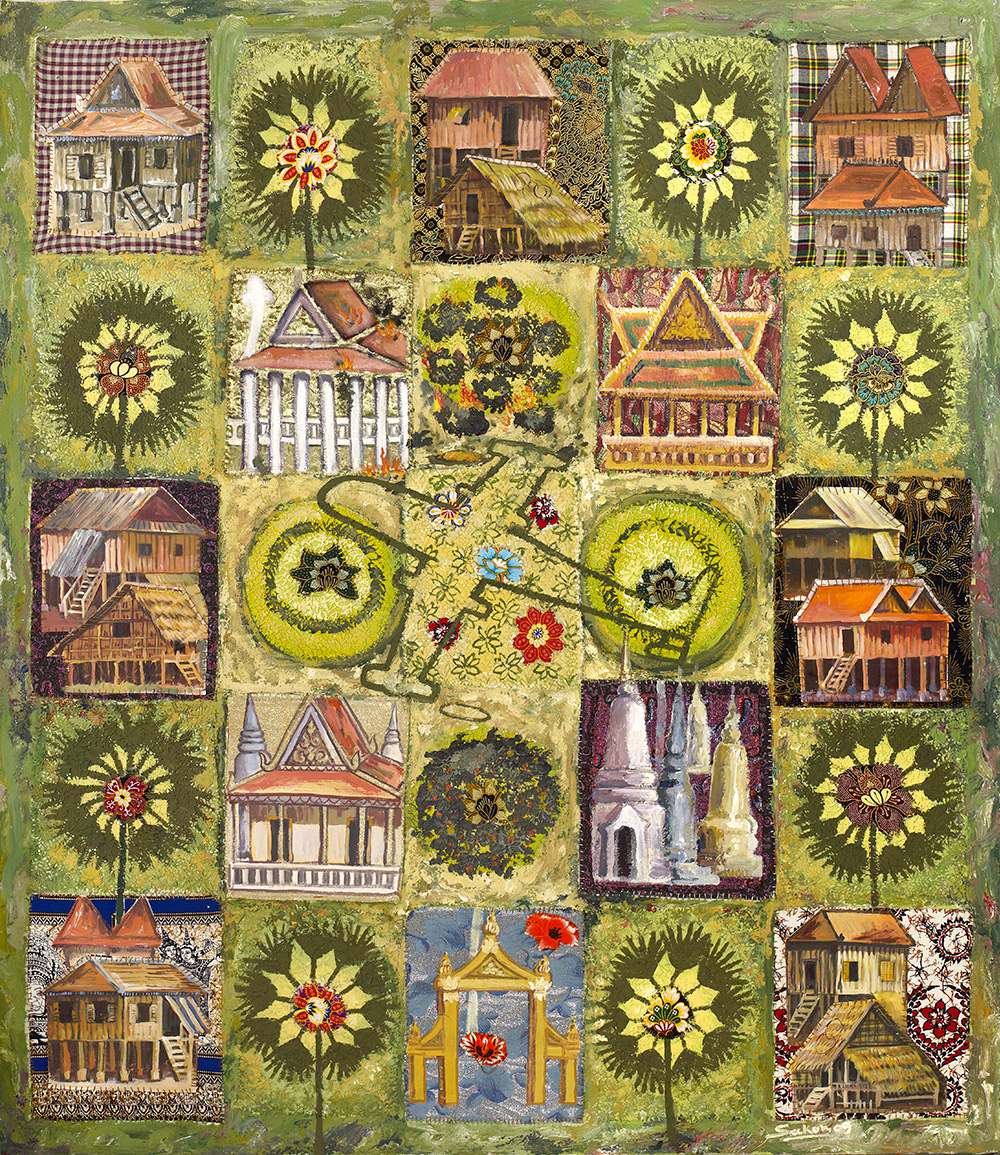 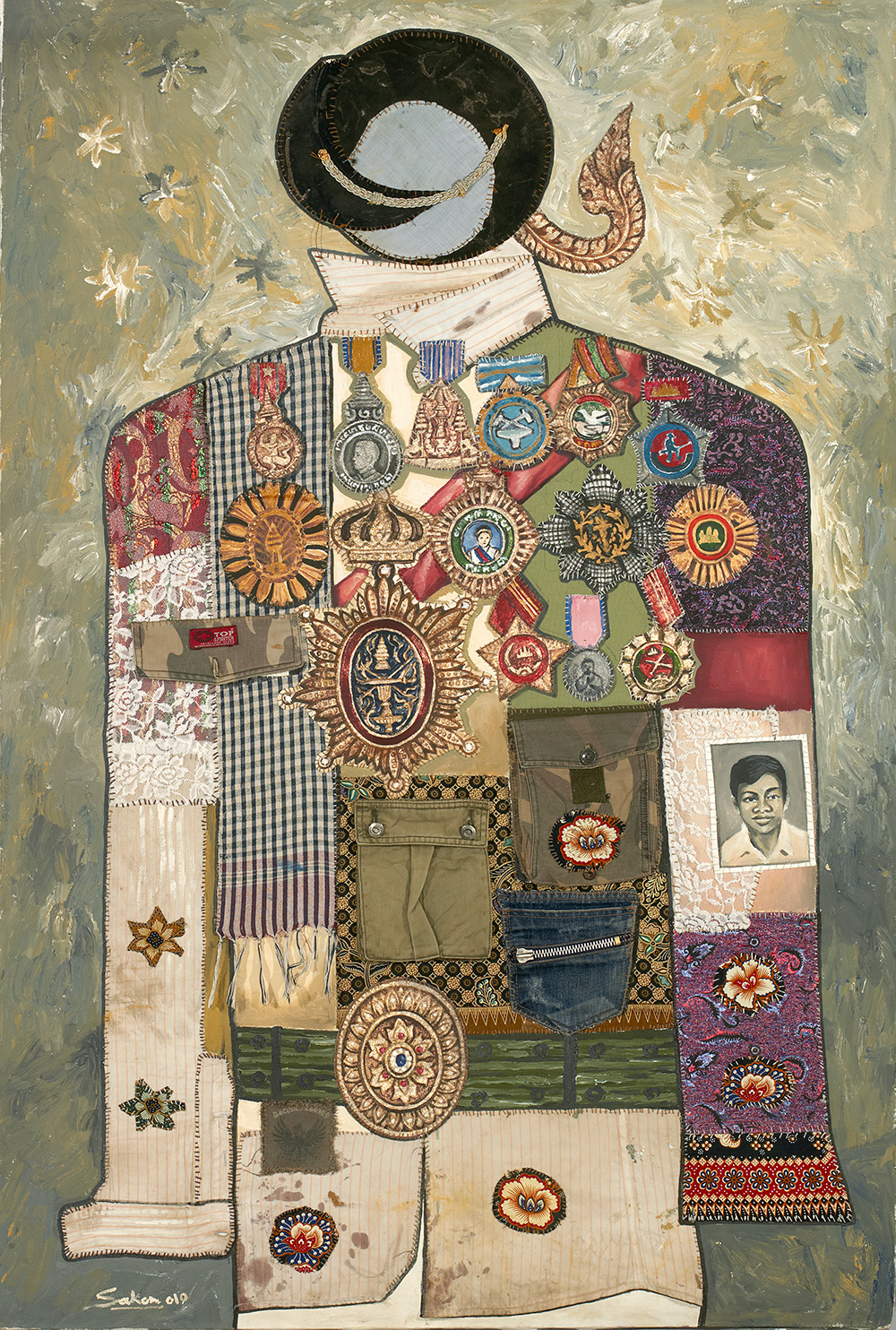 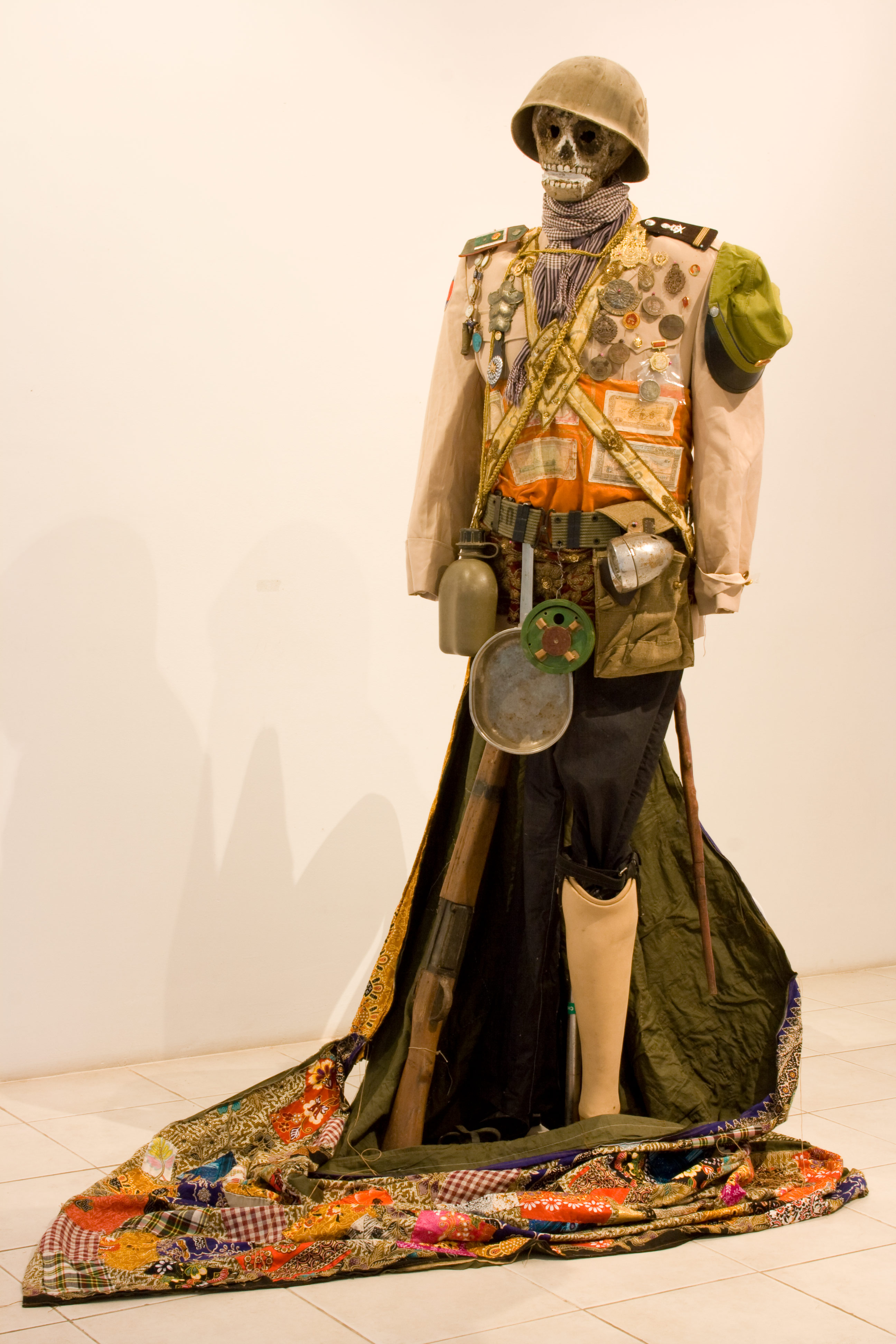 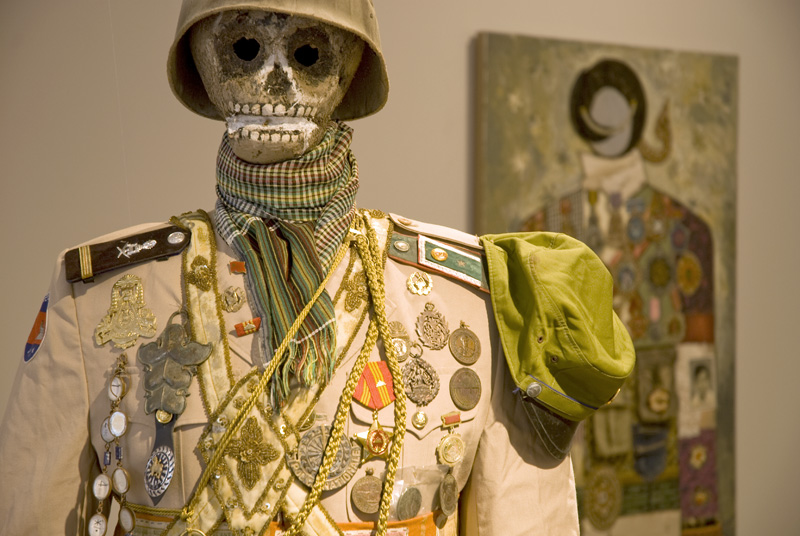 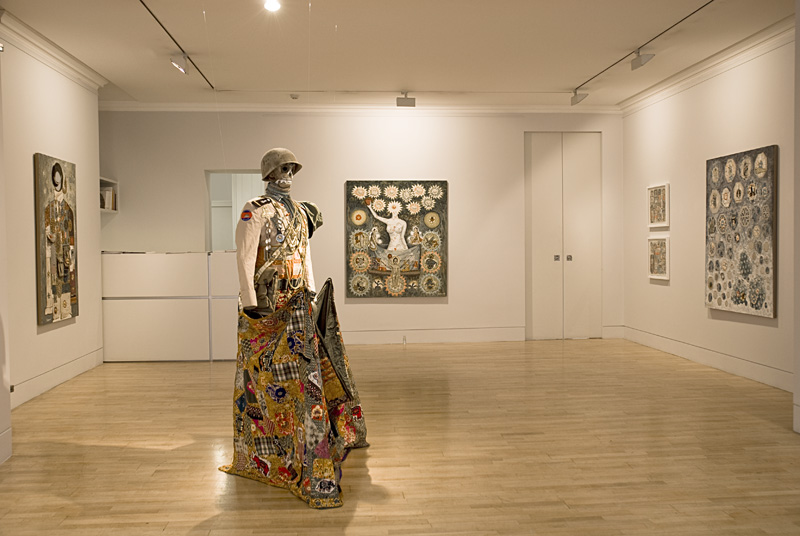 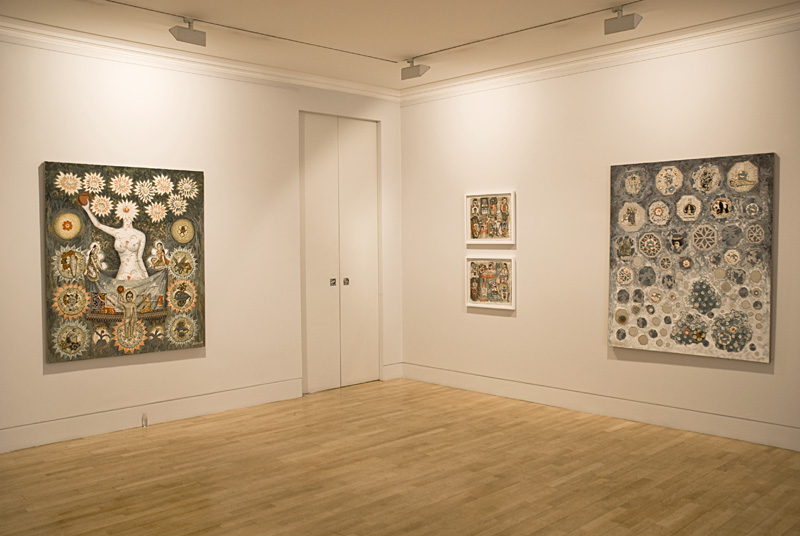