Rossi Martino proudly announces Oltre la Pittura, an exhibition foregrounding a generation of seminal post-war artists active in Italy who not only elaborated upon the widespread cubist painterly syntax of preceding decades, but also updated the terms of abstract and informal art. On view will be a wide range of works by Lucio Fontana, Mimmo Rotella, Piero Manzoni, Enrico Castellani, Agostino Bonalumi, Salvatore Scarpitta, Carla Accardi, Alighiero Boetti and Carol Rama, who joined their European counterparts in developing innovative approaches to art-making, thus extricating Italy from decades of cultural isolation.

Working predominantly in the extension of material space, Lucio Fontana (1899–1968) executed holes and slashes that opened his canvases to further spatial dimensions in works such as Concetto spaziale (1957). This densely textured painting in muted hues, from a series the artist made between 1957 and 1968 titled Olii, brims with a constellation of holes that produce an otherworldly surface. Another influencer, Alberto Burri (1915–1995), experimented with compositions dependant on radically innovative materials, abandoning traditional pigments altogether in favour of new elements that artists had never used before, such as jute, tar, wood, cloth, iron and plastic. Although works by Burri are not included in the present exhibition, both he and Fontana notably transcended the traditional goals and techniques of painting, succeeding in defining a novel and unexplored realm of formal and conceptual possibilities. By the 1950s, their work had largely contributed to the distinctive influence of Italian art on the European avant-garde.

Notwithstanding their pioneering character, Fontana’s and Burri’s developments were immediately adopted by a younger generation of artists active in the same circles. Mimmo Rotella (1918–2006), who was working, like Burri, in Rome, made use of advertising posters found in the streets, which he tore up and collaged onto canvas. In Milan, Piero Manzoni (1933–1963) famously refused to use any pigment whatsoever and limited his practice to the immersion of canvas sheets in baths of white kaolin. The gluelike properties of this white, clay-based liquid resulted in highly sculptural configurations displaying dramatic, sensual folds, in works such as Achrome (1958), whose repeated kaolin-coated pleats form a dramatic cascade of self-asserting material texture across an otherwise flat, white canvas, emanating a quiet, innate and sober elegance.

Expanding on and reversing Fontana’s innovative research, Enrico Castellani (1930–2017) and Agostino Bonalumi (1935–2013) operated on the physical dimensions of the pictorial surface to protruding effect. Instead of digging in profundity – and thereby investigating a dimension beyond the two-dimensional plane – they deformed the canvas towards the viewer, exerting an outwards-reaching pressure by means of nails and wooden supports. The pictorial plane, which until then had remained a stable, two-dimensional field, therefore became convex, three-dimensional and, essentially, sculptural.

Salvatore Scarpitta (1919–2007) enacted a similar operation by means of entirely different materials. Like Burri, he used idiosyncratic and heterogenous materials, such as cloth and, unusually, leather, to refute the two-dimensional nature of the painting. His strongest artworks resemble complex, organic structures fraught with inner tension and potential energy, similar to taut muscle fibres. As a result, the confines of painting and sculpture seem to be more and more indefinite.

The research of Carla Accardi (1924–2014), on the other hand, followed a more personal and intimate route. After a traditional art education based on the precepts of art informel, she later abandoned the conventional techniques and practices of contemporary painting. In Accardi’s work, paint is no longer laid on opaque supports such as canvas or paper, but directly placed onto see-through plastics that reveal the underlying wooden stretcher. Colour, in her work, inhabits an autonomous realm, appearing to free-float in three-dimensional space. In this way, the art object becomes entirely de-materialised.

Combined, these developments paved the way for the emergence of Arte Povera, which towards the end of the 1960s constituted the most noteworthy development in post-war Italian art. This artistic revolution is manifest in the textiles of Alighiero Boetti (1940–1994), who was amongst Arte Povera’s most famous exponents. Executed in 1989, his series of arazzi, or ‘word squares’, are a kaleidoscope of colours and letters, in which language is broken and rendered undecipherable by line and colour. In Untitled (Rispetti dispetti, Per nuovi desideri, Leggere verticale…), from the series, the artist creates his own unique order system based on possible combinations of letters and words. Each made up of sixteen letters, the sentences are inscribed in twenty-five square grids, in a hermetic, zigzag order, reading from left to right and from top to bottom. Like his older counterparts, Boetti adopted an unusual and archaic technique – in his case, weaving – which he updated to serve his groundbreaking practice. In the arazzi, then, beyond the simple disfiguration that underpins Boetti’s entire conceptual approach, the artist exalts and celebrates the sheer sensual beauty of colour.

Also propelled by exciting new movements of the time, including Arte Povera, Carol Rama (1918–2015) delved into the realm of femininity and queer desires through deviant, abstract works that questioned the veracity of painting itself. Atop traditional foundations such as paper and canvas, she juxtaposed highly symbolic, eclectic materials – ranging from animal claws to electrical fuses to surgical tools – that drew from childhood traumas, such as her father’s suicide and her mother’s institutionalisation, as well as subjects rooted in the biographical, the industrial, the phallic and the profane.

The title of the presentation – Oltre la Pittura, or ‘beyond painting’ – speaks to both the material rupture of the painterly surface, which was practiced by these leading exponents of the Italian post-war avant-garde, and the conceptual transcendence of the idea of painting, defined exclusively by means of an imagistic construction. 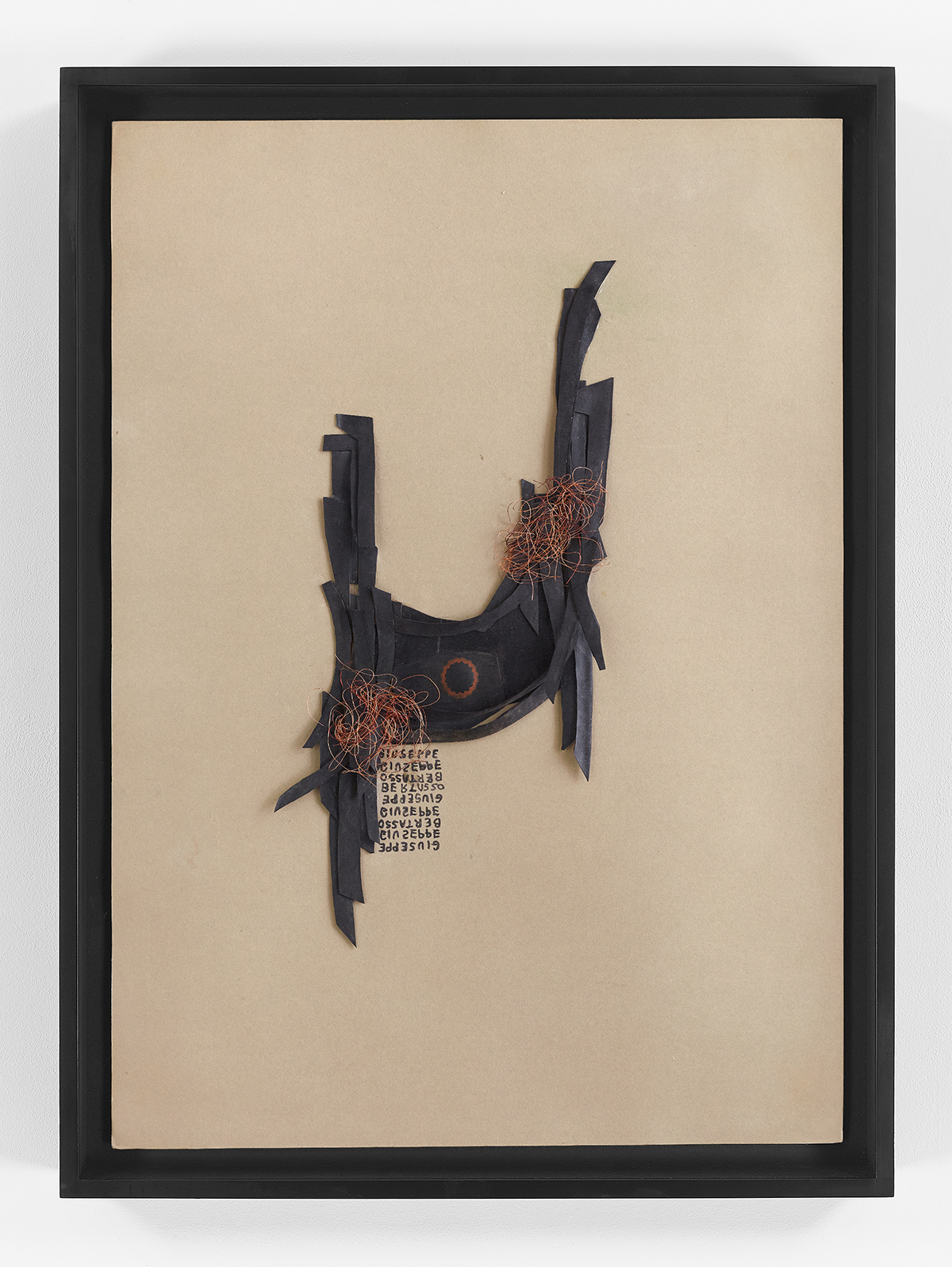 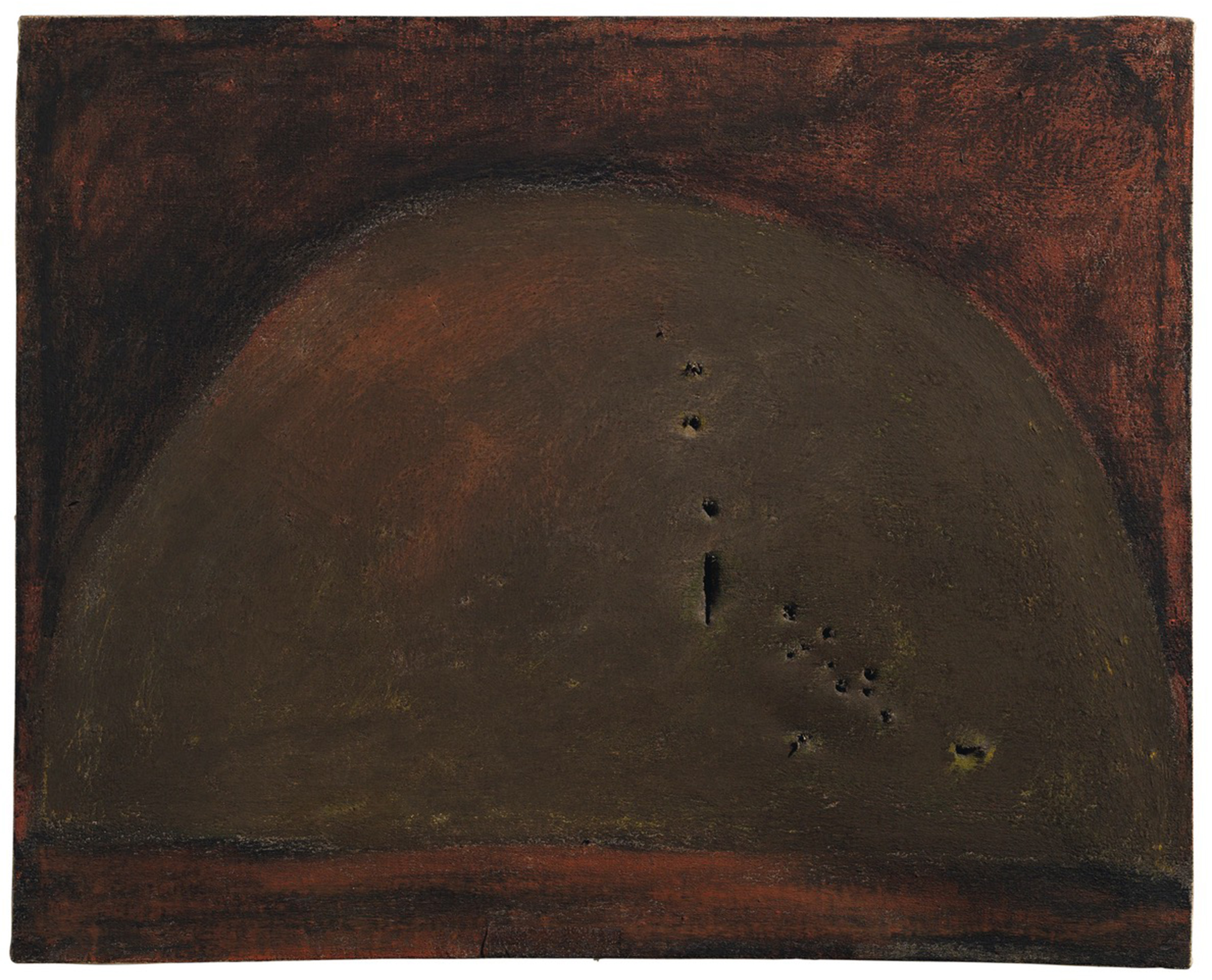 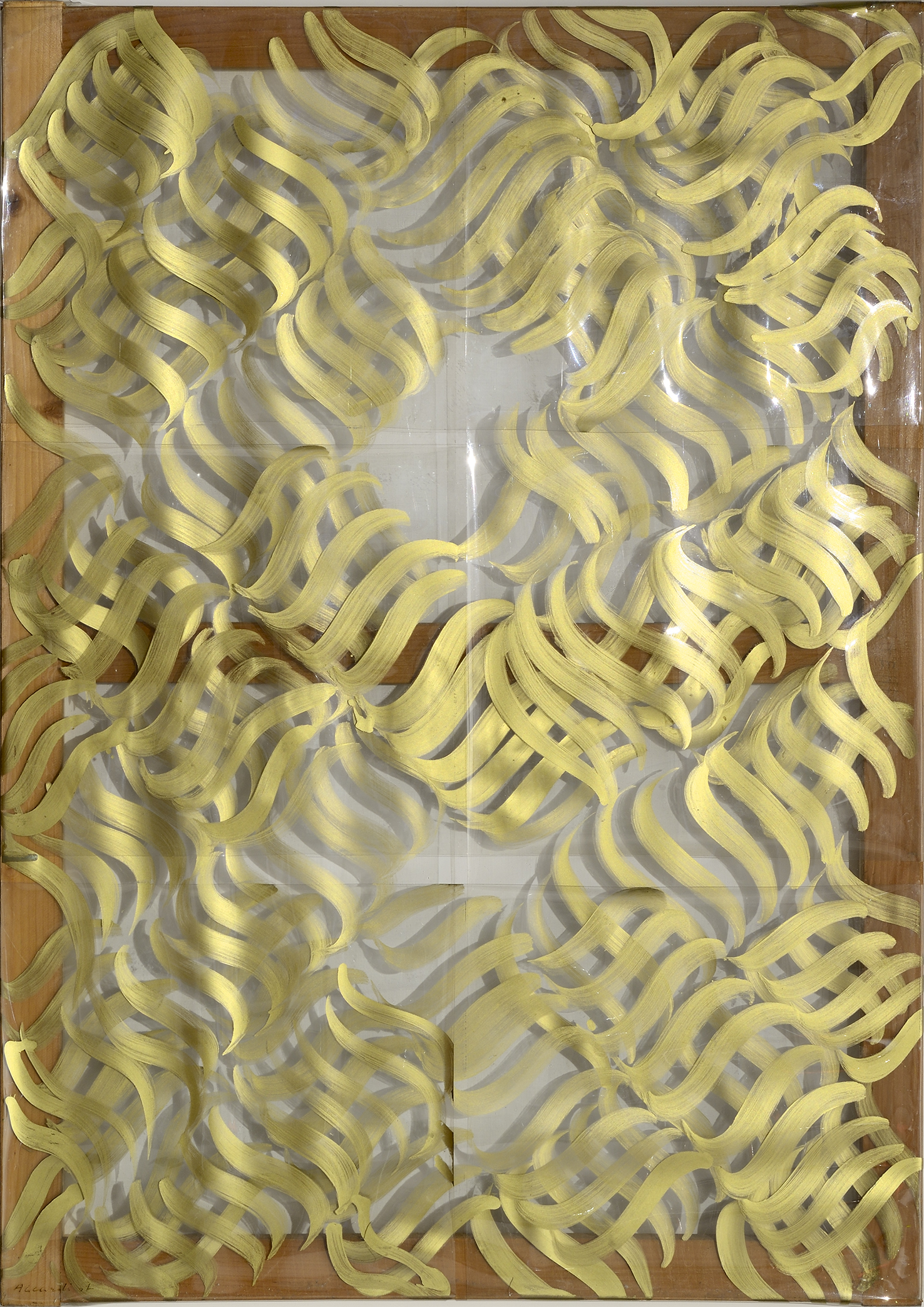