The Eye of the Storm

Rossi Martino, the commercial partnership of Fabio Rossi and Giovanni Martino established to promote European art in Asia, proudly announces The Eye of the Storm, an exhibition of recent work by Italian artist Vanni Cuoghi (b. 1966). The presentation focuses on his series titled Monolocali (2015–ongoing), in which dioramas reconstruct settings on a reduced scale, thus confining his cut-out paper characters to a specific time and space, similar to that of a theatre production. This semi-autobiographical exhibition, featuring his 2019 Typhoon works, which are part of the series, acts as Cuoghi’s whimsical response to the devastation he witnessed in Hong Kong, when Typhoon Hato struck during a visit in 2017.

The exhibition is constructed in two parts: the first gallery consists of images inspired by video footage of metal gates bent and distorted by the storm, which aired on news channels in the artist’s hotel room. These images also depict torn-up shutters and knocked-out gates smashed by the fury of the winds, as well as piles of rubble containing uprooted trees, torn metal sheets, chipped planks, shreds of paper, ripped fabrics and shattered furniture. They provide glimpses into the city’s silent and deserted corners – a negative and chaotic version of Giorgio de Chirico’s metaphysical imagery. It is the calm after the storm (la quiete dopo la tempesta) – as described in the eponymous 1829 poem by Giacomo Leopardi (1798–1837) – the merciless photograph of an announced disaster, that forces us to look at the world (and the fury of Nature) in a new light.

The second gallery portrays the artist’s story of the moment before the typhoon struck the city. Included are visions of the indoor, cloistered spaces and sheltered areas where, as Cuoghi imagines, people happened to be as Hato passed: apartments, offices, waiting rooms, bars, hallways, hotel rooms, prayer rooms and even art galleries. He envisions the exact moment when, in different parts of the city, the typhoon will appear, freezing his characters in a momentary apnea. Yet, in this still, rarefied moment, in the hypnotic wait, someone realises that the atmosphere has changed, almost forewarning a sinister presence. A worshipper at Man Mo Temple unexpectedly turns her back on the altar in Monolocale 87 (Typhoon 13). In the meeting room of a skyscraper in the city’s business district, a man on the phone seems paralysed, his arm suspended to hold a document in Monolocale 86 (Typhoon 12). An elegant woman sitting in a luxury hotel bar suddenly turns towards the entrance in Monolocale 75 (Typhoon 1). On the other side of the town, a student inadvertently drops a ream of notes on the chequered floor of her living room in Monolocale 82 (Typhoon 8).

The exhibition’s title, The Eye of the Storm, not only refers to Typhoon Hato, but also alludes to the format of Cuoghi’s art practice, which can be traced back to his time as a theatre set designer. The artist focuses the viewer’s gaze into each individual scene, whilst his own characters stare back at them with their eyes closed, in an apparent attempt to extend their influence beyond the frame and interact directly with the audience. Within each detailed diorama, one can easily imagine oneself as the omniscient narrator of the artist’s stories. Or perhaps, for Cuoghi’s paper characters, it is the viewer’s gaze that reflects the imminent storm.

An illustrated bilingual catalogue is available in conjunction with The Eye of the Storm by Vanni Cuoghi. 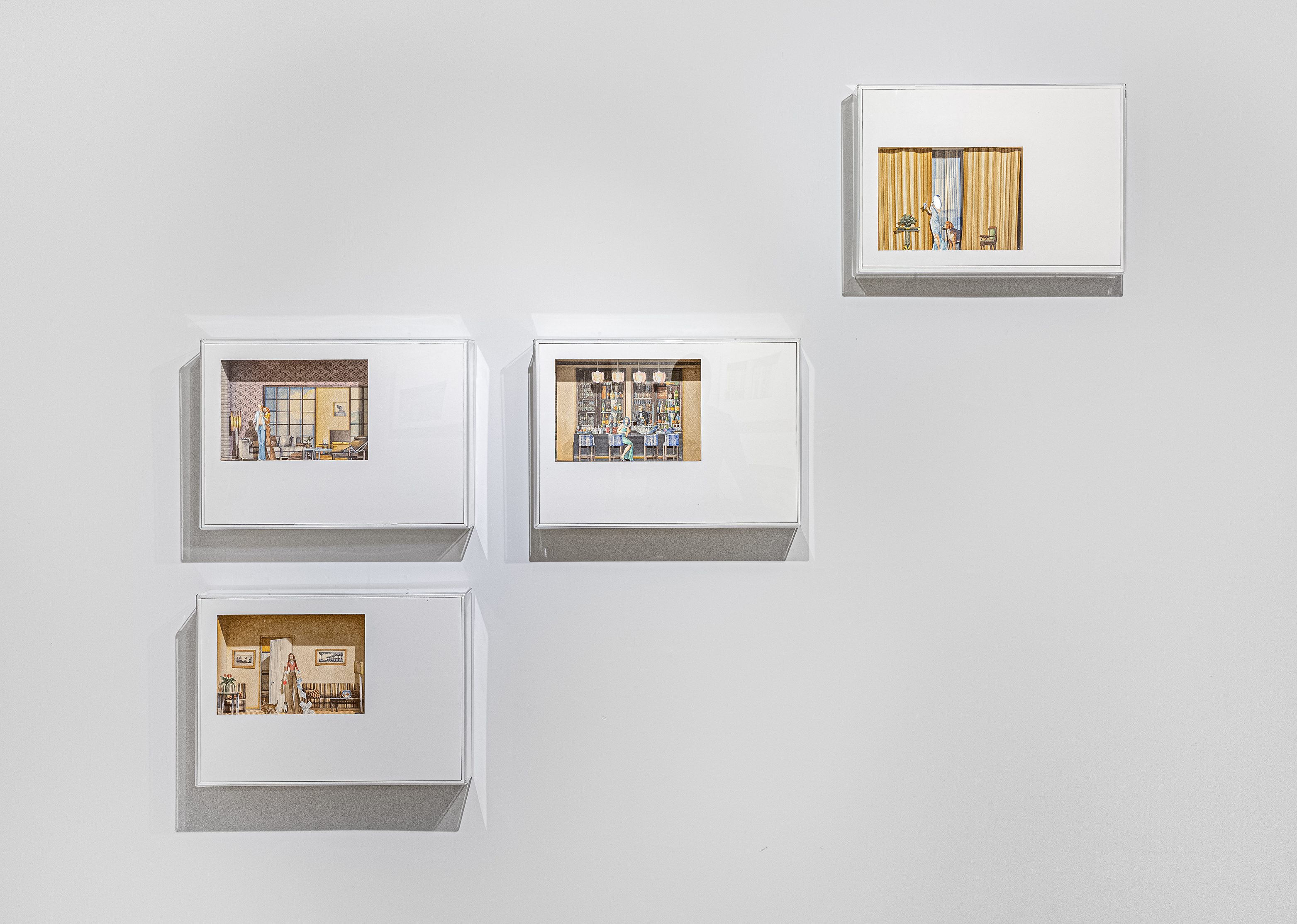 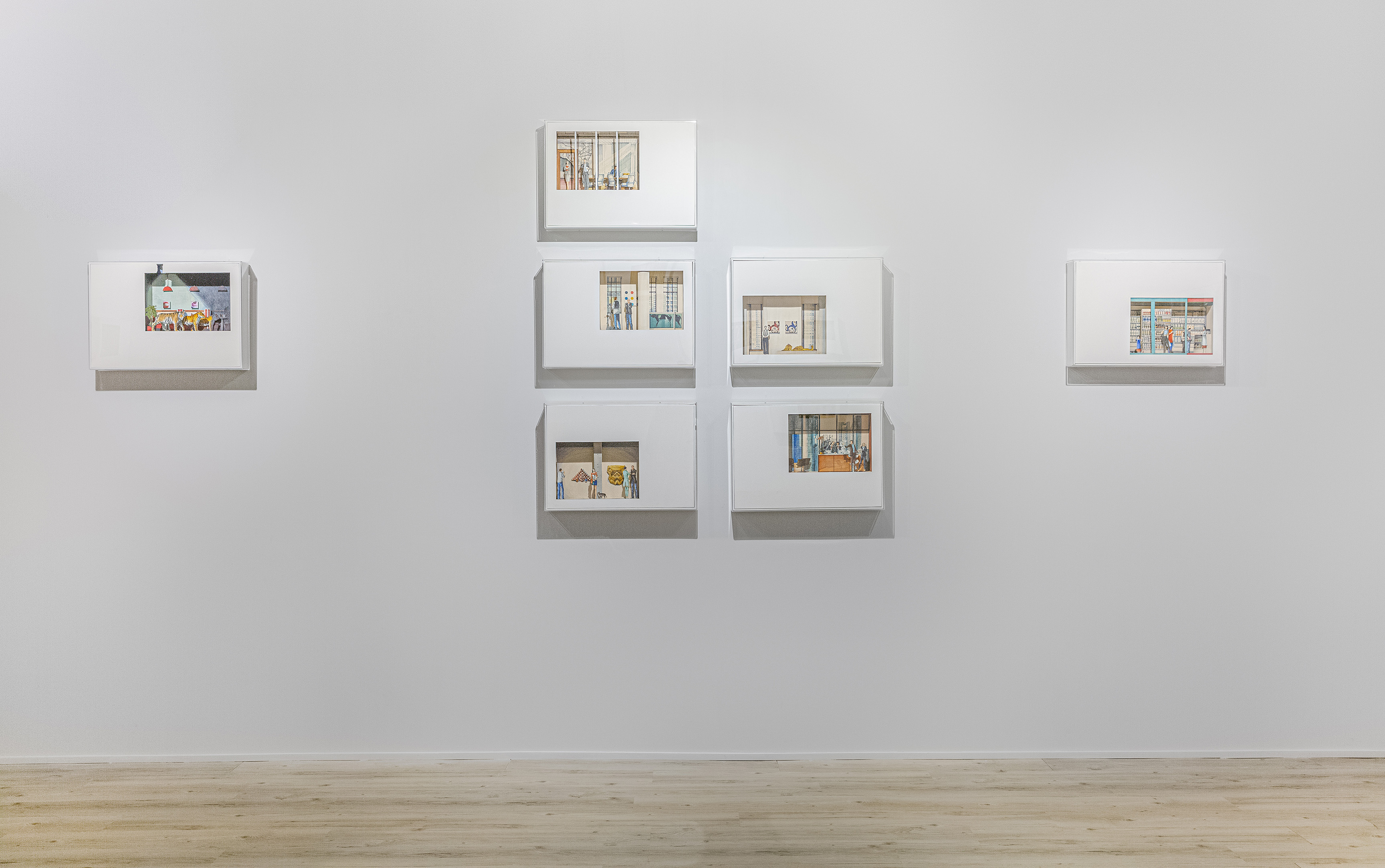 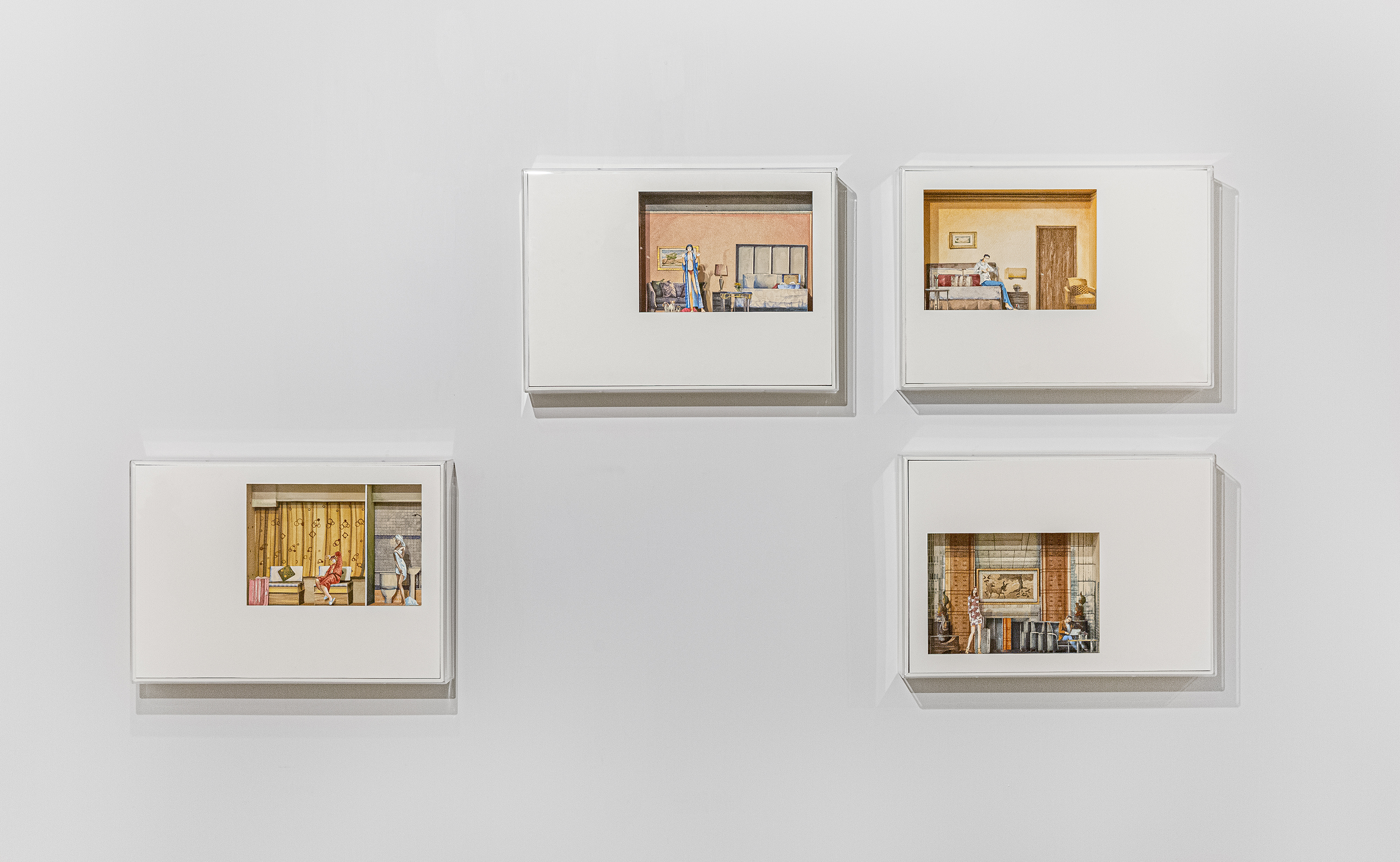 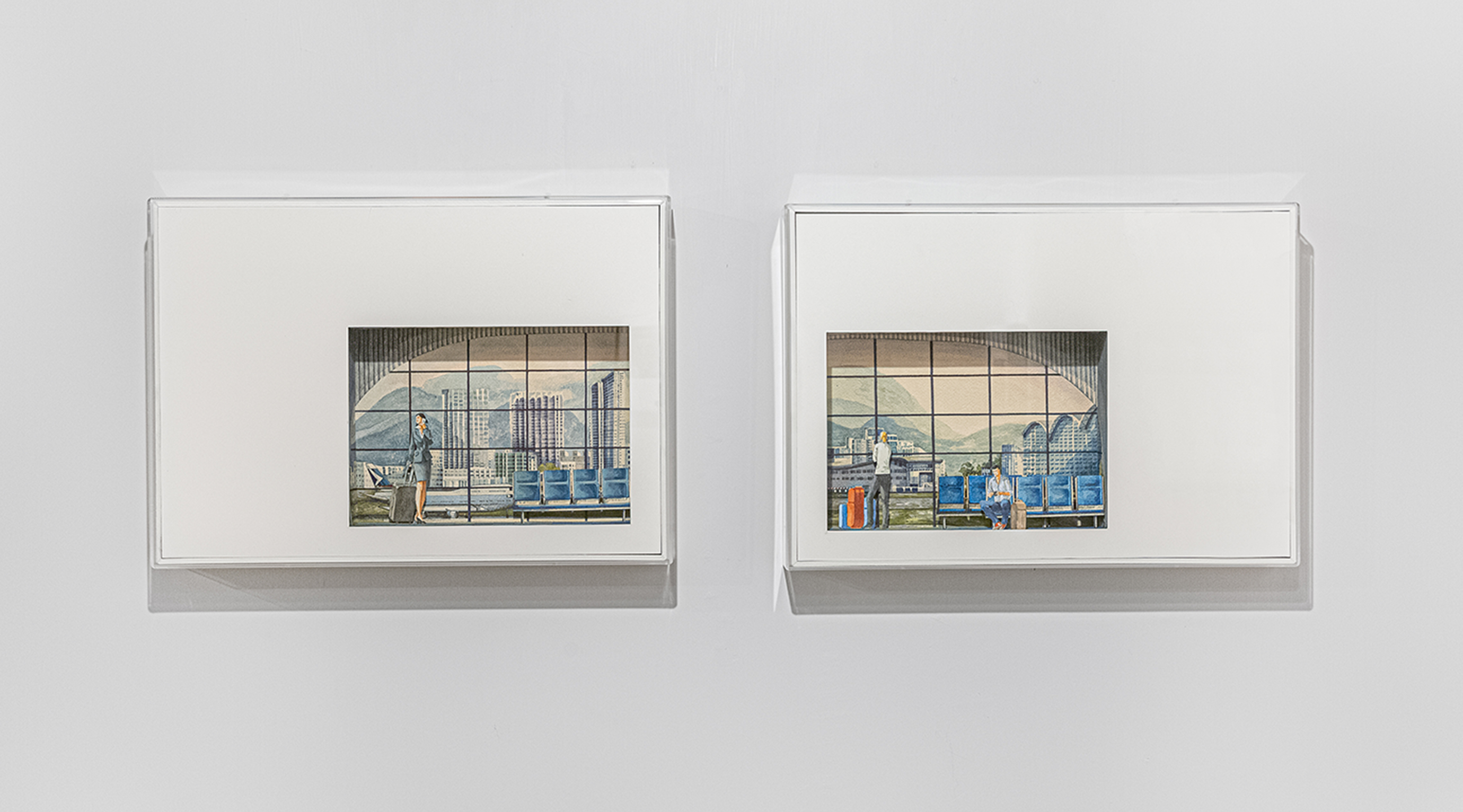