In meticulously drawn details, the thangka depicts the great red Tantric Buddhist deity in union form with his consort, with monks and protectors of the Buddhist dharma surrounding the united deities.

Red T Multiples is a single platform that can deliver fully customized artwork by great artists in minutes. It can be used to create the perfect work for a beloved home or an entire art direction for a luxury resort. Red T Multiples work under a strict limited edition license with artists, making sure their work remains limited and their clients have an exclusive proposition.

Erect in front of an aureole of flame, the six-armed Mahakala is one of eight dharmapalas, a ‘Protector Deity’ and a ‘Wisdom Protector’ in Himalayan Buddhism.

The meaning of his name, “Great Black One”, is embodied in the black pigment used to depict his skin. The pitch black dharma stands in aggression, with raised eyebrows, bulging eyeballs and a wide mouth flaring his teeth. Human skulls strung from his neck as an ornament, while his arms, wrists and ankles are adorned by yellow snakes. The black deity raises a mala (string of prayer beads) made of skulls and a pointed trident above his head, with his primary hands holding a red skull cup and a golden chopper in front of his chest.

There are many forms of Mahakala described in the Buddhist text, they could be holding different ritual objects, varying in their number of heads, arms, even in skin colour. A feature that stays unchanged among all depictions is that Mahakala’s aggression is justified as a means against the negativities on the route to enlightenment. Spiritual practitioners of Buddhism believe that the dharmapala helps them to avert inner and outer obstacles.

The red and blue legs belong to Hayagriva and Vajrayogini that are in Yab-Yum position, representing the union of compassion and wisdom as a way to reach enlightenment.

With their feet stretching outwards, together they step on a manifestation on Shiva, a principal deity in Hinduism symbolising ego-hood. As Buddhists strive to eliminate the being of self, this stance of power over the foreign deity means a conquest of egotism. Not shown in the narrative of this thangka, there are stories on Shiva being tamed and converted to Buddhism. Eventually, he was absorbed into the Tantric Buddhist system as a guardian deity of Buddha.

The pedestal that the couple stands on is a lotus throne, highlighting their divine status in the centre position of the thangka. Lotus is an essential symbol in Buddhism - Buddha compares himself to a lotus flower, rising out of the murky water that is similar to the worldly affairs distracting human beings.

Gazing intensely at the ruby red face of Hayagriva, Vajrayogini is the feminine wisdom consort to the chief among Herukas, a category of wrathful deities.

For modern standards these deities may resemble greater of monstrous imageries, wearing crowns bejewelled with skulls on their several heads, and snakes wrapped around their limbs as accessories. The ferocious looks are truthful to their nature, in a sense that they are more powerful than demons - they are forms of Bodhisattvas that have taken on the mission to protect humans and demolish the obstacles on their way to enlightenment.

Hayagriva is the deity of speech, symbolic with a green horse head sitting in his luscious golden mane. On each of his faces, he has three eyes that can see the past, present, and future. Opened with an intention to intimidate, his mouth has precisely four fangs that indicate his triumph over the four evils (named Mara, the demonic celestial king in Buddhism).

In response to the neighing horse head’s representation of how speech, in its ferocious form, has emancipating effects, Hayagriva’s blue counterpart Vajrayogini has a sow’s head at her forehead which signifies the transcendence out of ignorance. This is a union between compassion and wisdom, a necessary fusion to overcome the false duality of the world.

In the upper right corner of the thangka, an unidentified lama wearing the yellow pandita hat holds a flower in his raised left hand, with the tips of his thumb and index finger touching as his other three fingers point straight up. This sacred hand gesture is called the Vitarka Mudra, representing the teaching of Buddhist teachings.

The enclosed circle formed by the fingers symbolise a cycle that is perfect without a beginning or end. His right hand, extending downwards to reach the ground, is performing the earth-touching mudra. This mudra recalls the moment when Shakyumuni, the founder of Buddhism, was battling the temptation of the celestial king, Mara, under the bodhi-tree. Buddha called on the goddess of the earth, Sthavara, to witness his determination and worth to achieve enlightenment. 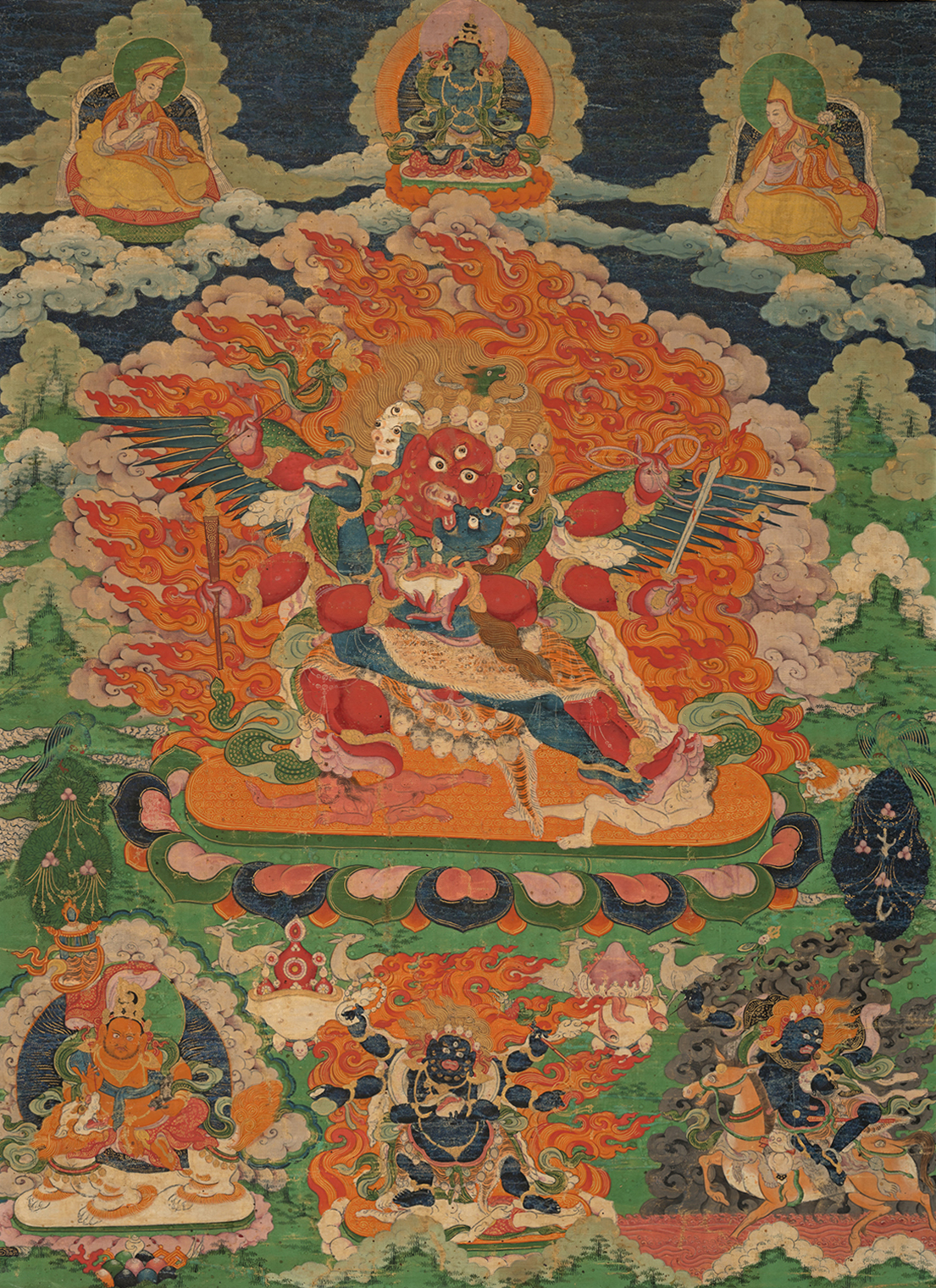