Many of the teachings of Buddhism were originally passed down orally through repetition and communal recitation. These spoken words were later compiled into important canons and manuscripts that ultimately constituted a rich corpus of Buddhist literature. Revered across all schools and sects of Buddhism, these texts are considered profoundly sacred. In order to protect their contents from damage over time, monasteries and wealthy families commissioned elaborate manuscript covers.

Guardians of the Sacred Word – Part II, on view at Rossi & Rossi Hollywood Road, Hong Kong, from 11 September to 16 October, showcases a selection of exceptional Indian and Tibetan manuscript covers dating from the 10th to the 14th century. This is the second iteration of Guardians of the Sacred Word, an exhibition of rare early Tibetan manuscript covers that the gallery mounted in New York in 1996.

Early Indian and Nepalese manuscript covers derive their format from the long, narrow palm leaves that serve as their pages. They are often painstakingly illustrated with images of the Buddha, bodhisattvas and other deities, and protected by wooden covers. Tibetan manuscript covers, on the other hand – although primarily inspired by the tradition of the subcontinent – did not strictly observe the palm-leaf format. Written on paper imported from China, they are larger in size and elaborately carved, painted and gilded, exemplifying the finest Tibetan craftsmanship and artistry.

Amongst the works on display is a pair of exquisite 14th-century manuscript covers from Central Tibet. Painted red and carved with elaborate scrolling motifs, they are intricately decorated with lotus roundels and geometric symbols. One panel shows the face of majesty/glory (kirtimukha) overlooking the scene from the top, symbolically guarding the sacred texts. Another depicts a pair of makaras, mythical aquatic beasts of strength with short fish tails, arching their heads backwards. Fashioned from hardwood, an extremely scarce material from the Tibetan plateau, these works reflect the respect with which the texts of the Buddhist canon were accorded.

Exhibited alongside the manuscript covers is a series of contemporary paintings titled Black Scripture (2012) by Lhasa-based artist Gade (b. 1971). Inspired by thematic imagery found in the Gold Manuscript, which recounts the fifth Dalai Lama’s visionary experiences that occurred periodically throughout his life, the artist created a series of works on handmade Tibetan paper. Calligraphed and painted in gold, silver, subtle blues, greens and reds against a charcoal background, the Gold Manuscript is the sole illustrated secret autobiography of the fifth Dalai Lama known to exist. Gade modelled Black Scripture in a similar format, meticulously painting traditional Tibetan miniatures on a black backdrop, and then chiselling snippets from contemporary consumer goods into the foreground. ‘Legend says the scripture recorded [the fifth Dalai Lama’s] dreams’, notes the artist. ‘I've created several scriptures on an enlarged scale and carved my own dreams on them with a chisel. My dreams, however, are destined to be mundane…full of materialistic pursuits’. 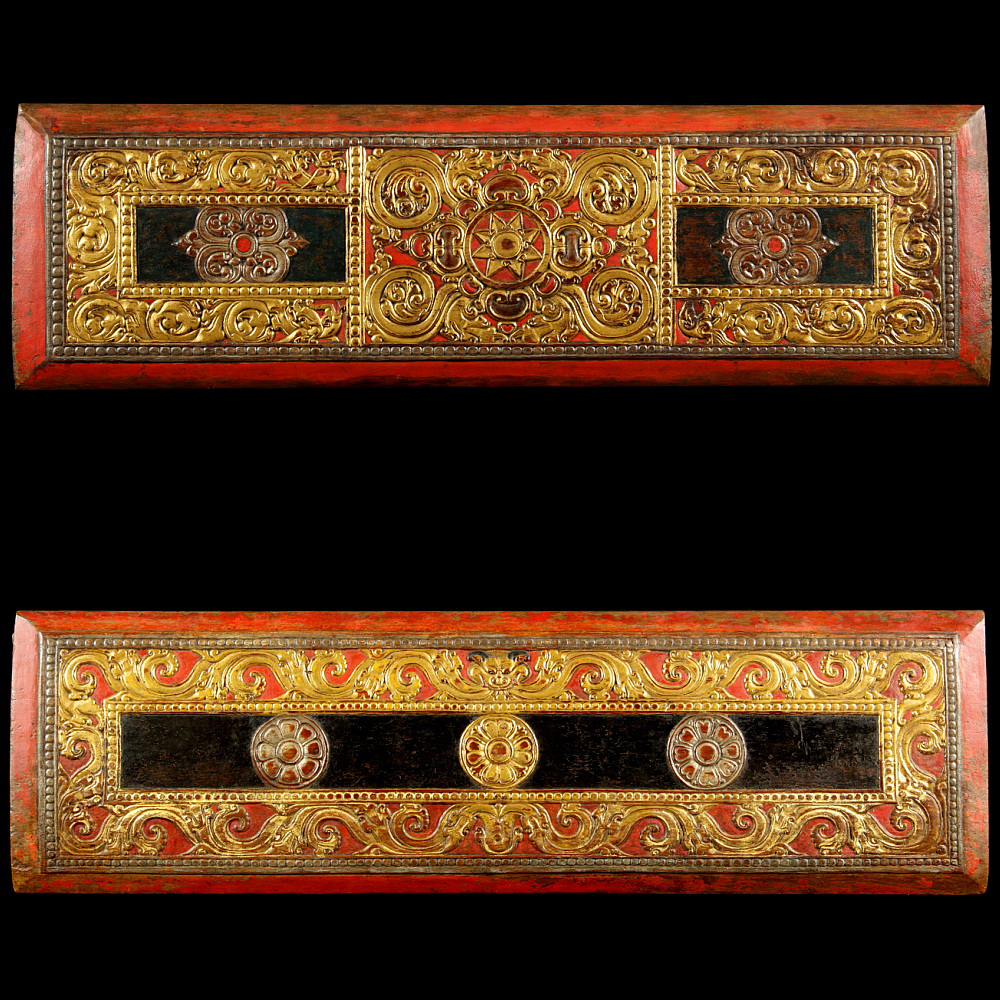 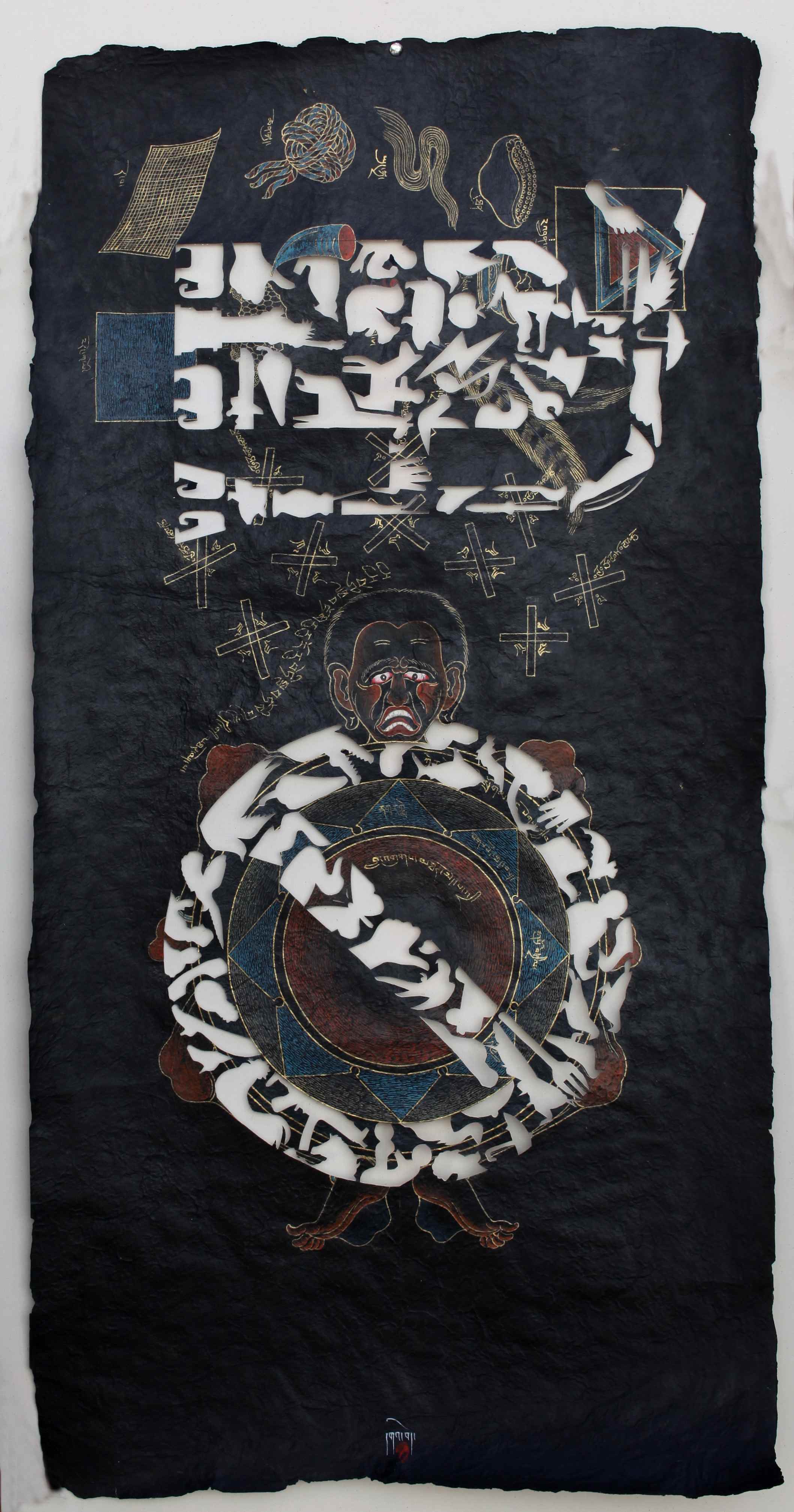 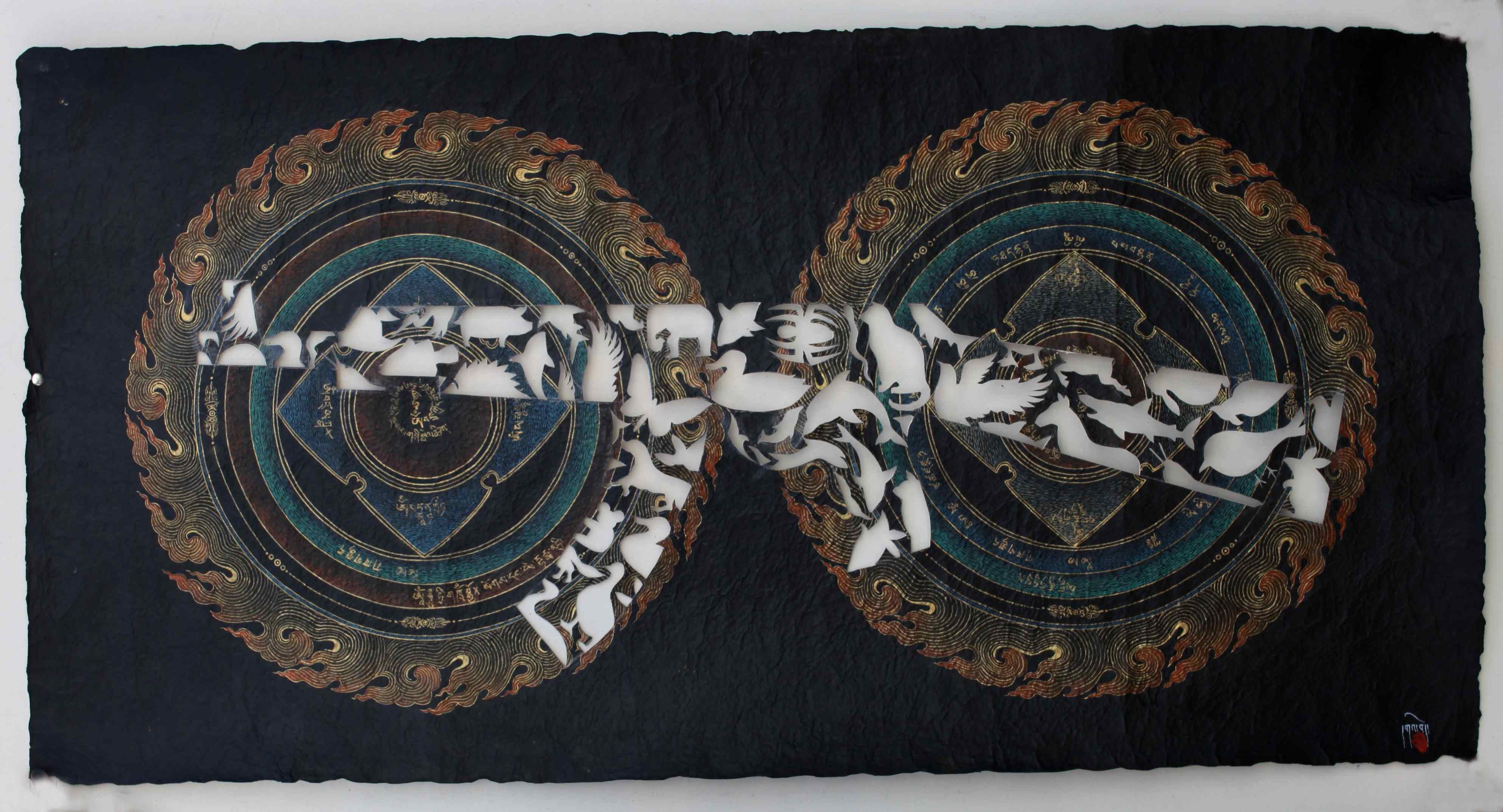 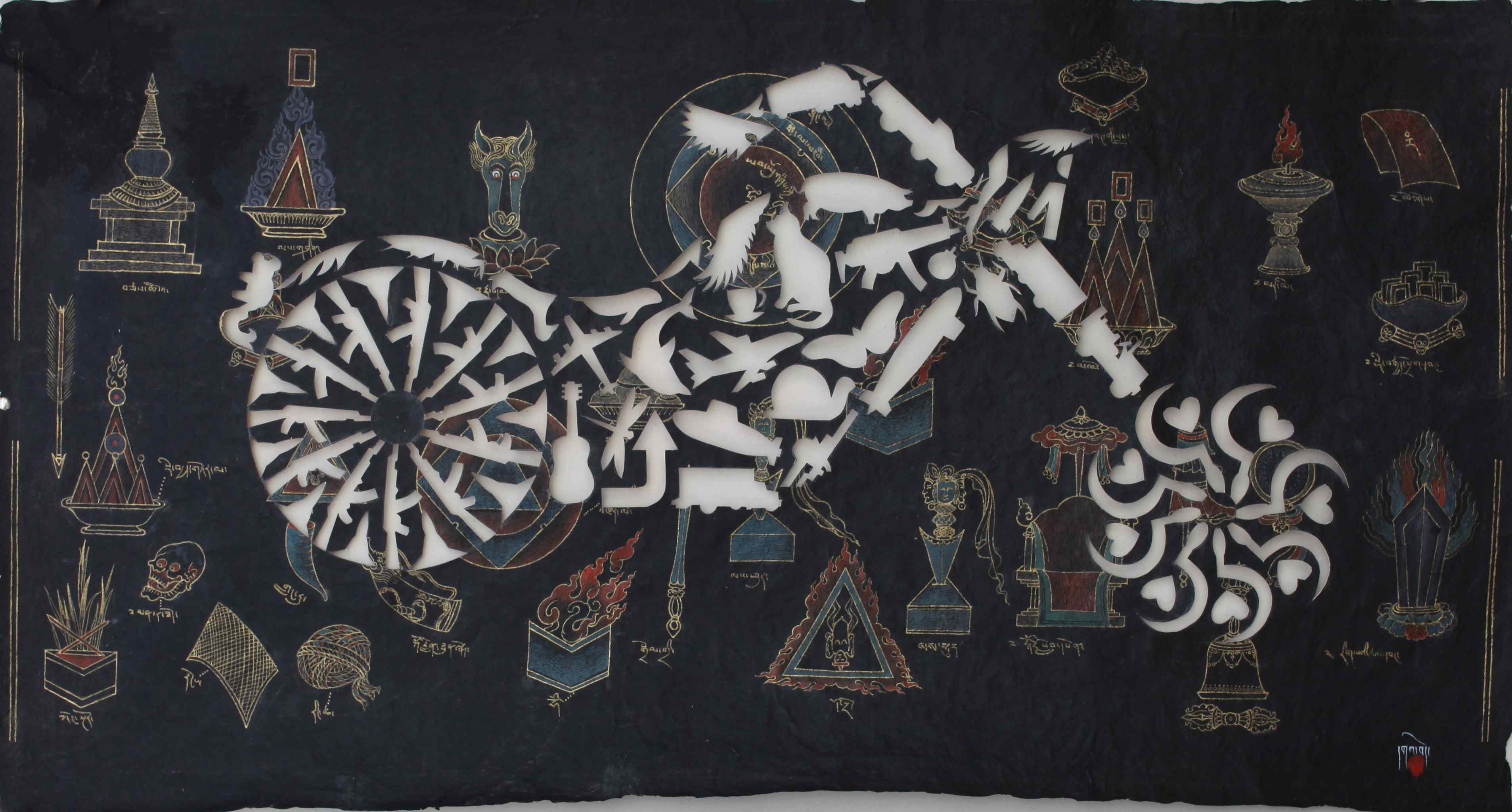 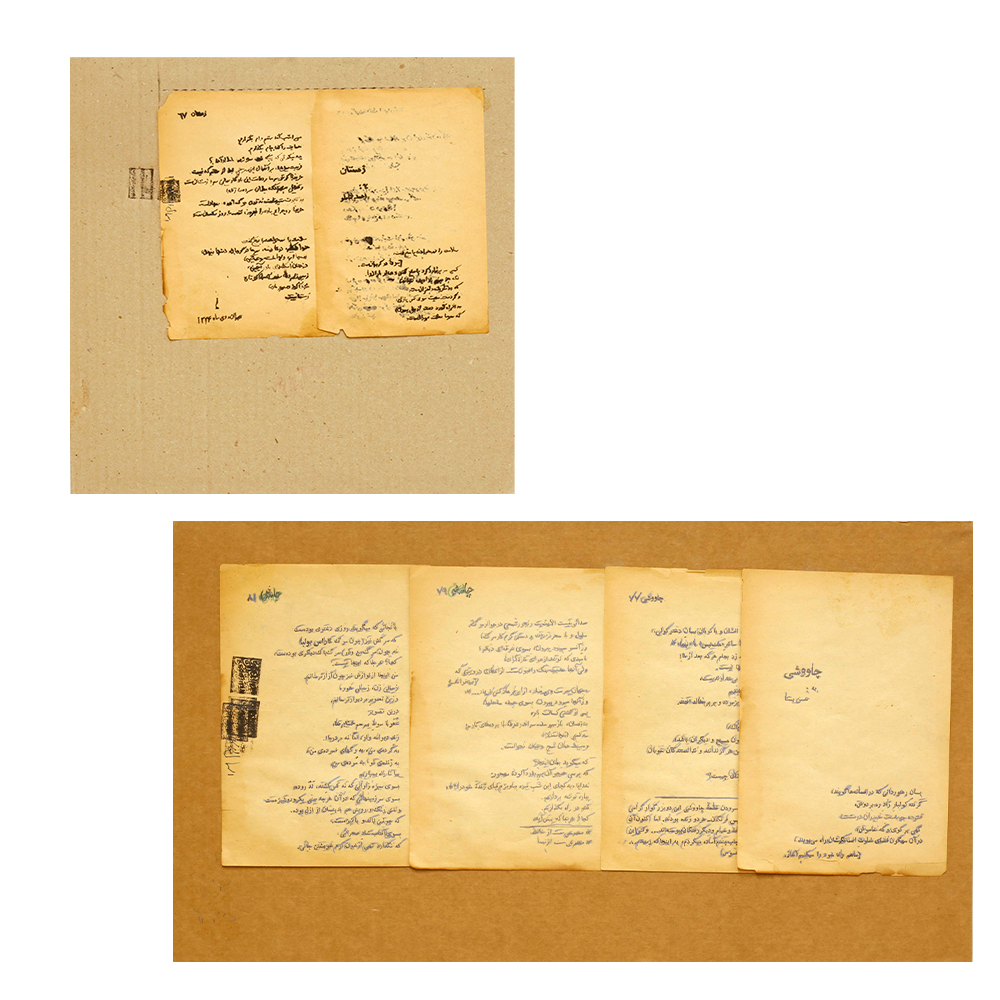