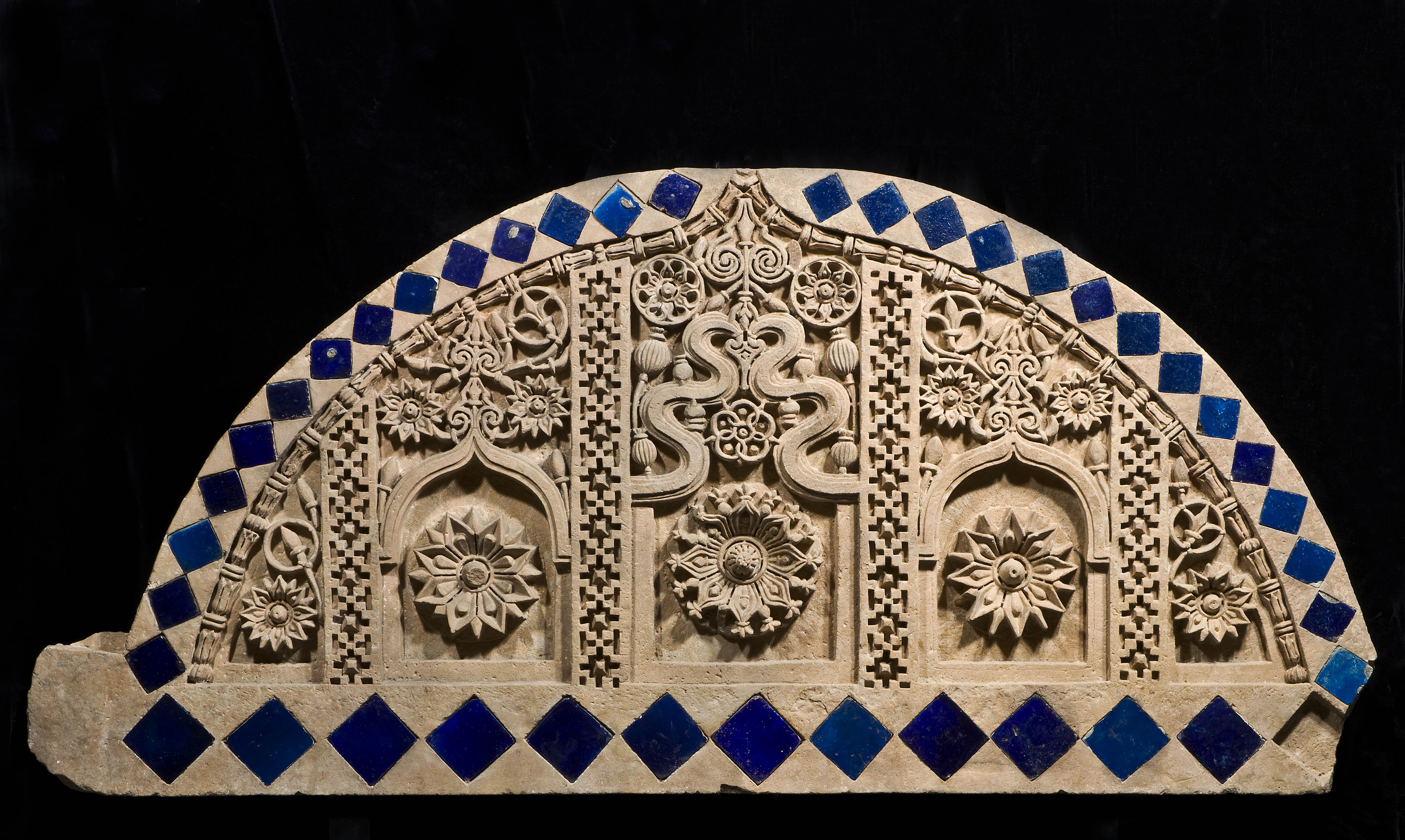 This finely carved and exceptionally well-preserved sandstone tympanum most likely once surmounted a door or a recess in a tomb or mosque. Of semicircular form, the broad flat outer edge is set with deep blue glazed tiles resting on their points and flush to the surface. The deeply carved inner surface is framed by an ogival arch with a border of lotus buds, and divided symmetrically into five sections by four vertical bands decorated with a cruciform checkerboard motif. The central and most intricate section containing the largest flower head is surmounted by a serpentine Jaina torana, flanked by both smooth and ridged poppy seed heads, poppy or lotus buds and smaller rosettes. Two ogee arches flank the central field, framing star-like rosettes and surmounted by similar, smaller rosettes, buds and scroll-ended palmettes. The smallest triangular sections contain rosettes and flower buds.

The original function and placement of the tympanum is not precisely known. Arches such as this could have been included in secular buildings; however, funerary monuments are generally better preserved and thus provide more evidence today. The nonfigurative decoration points to a Sindh, Rajasthan or Balochistan origin, and more specifically, relates strongly to known 16th-century Sindhi monuments, in particular the Chaukhandi tombs and the tombs of Makli Hill, Thatta. While the synthesis of Hindu/Jaina and Islamic motifs is typical of late-15th- and early-16th-century Islamic stonework in the region, the combination of certain motifs found on the tympanum is rare (for example, the use of poppy buds, the placement of the trefoils in scrolls just off of the arches and the combination of the serpentine torana and the ogee arches). The decorative poppy-head motifs most likely make reference to opium, which was widely used by Hindu Rajput barons.

The presence of the ceramic tile inlays that frame the work also makes this piece especially rare. Similar tiles were used in Sindh as architectural decoration beginning in the late 16th century, and while the use of blue tiles can be seen in the funerary structures of Makli Hill in Thatta, their combined use with stone carvings is rare. Typically such structures were either constructed out of plastered brick structures decorated with tiles, or carved stone, though exceptions do exist. According to recent thermoluminescence testing, these tiles were last fired between A.D. 1511 and 1711, supporting the stylistic dating of the 16th to the 17th century.

There is a long tradition of collecting and preserving Indian architectural fragments. Many architectural remains formed part of the collections of the India Museum, which then became the Victoria and Albert Museum. More recent museum installations which incorporate architectural fittings including the Museum of Fine Arts in Boston, which has a fine red sandstone archway dating from the 17th century forming the entrance to the Indian galleries (Museum of Fine Arts, Boston, accession no: 1983.386). Other examples include the Crow Collection of Asian Art in Dallas, Texas, where the upper floors of a Haveli or private palace from Rajasthan, dating from the 18th century are installed (Crow Collection of Asian Art, inventory no: 1984.31).

This tympanum could also be incorporated into a modern architectural scheme, either placed appropriately over a door or entrance, or situated on a wall as a decorative feature in its own right. This would not present any technical difficulties, as suitable supports can be installed at the same time, concealed within a wall if necessary. Matching sandstone can be obtained from India to complete the installation.

Few architectural fragments of this period remain. Given its combination of motifs, the ceramic tile inlays and its excellent condition, the tympanum is a remarkable survivor as well as a visually arresting sculpture of the highest quality.

We are grateful to Melanie Gibson for identifying the composition of the tiles.