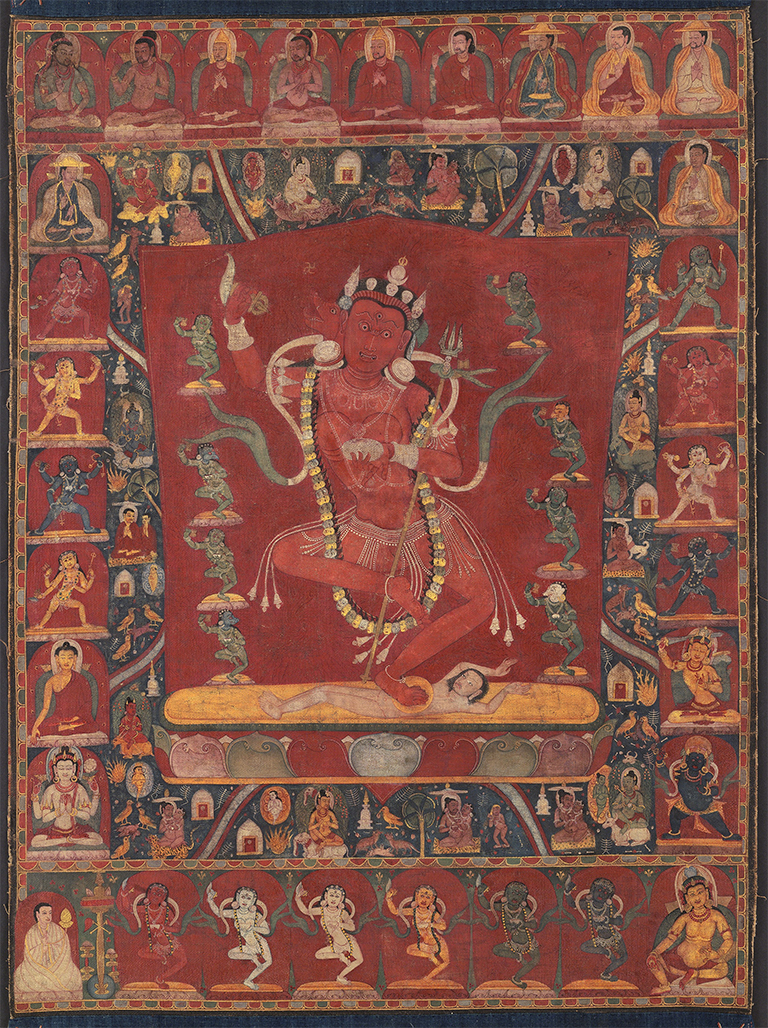 'Symbols of Buddhism - Sculpture and Painting from India and the Himalayas', New York, 2002

'Symbols of Buddhism - Sculpture and Painting from India and the Himalayas', (New York, 2002) no.4

Vajravarahi (Diamond Sow), symbol of freedom from ignorance, is here interpreted by a talented c. late twelfth or early thirteenth century Tibetan painter. The painting bears consecration inscriptions on the reverse in Tibetan ‘dbu can’ script; ‘om ah hum’ behind each figure and the ‘ye dharma’ creed. Vajravarahi is a tutelary deity (yi dam; thugs dam; Sanskrit: istadevata) invoked by Buddhist practitioners during their Tantric studies. She also appears in the practice of guru yoga, whereby a monk, through visualisation techniques, would" assume this feminine form [of Vajravarahi], symbol of wisdom and receptivity," in order to receive blessings and empowerments from a teacher. (Philippe Cornu, ‘Dictionnaire Encyclopedique du Bouddhisme’, Paris, 2001, p. 657)

On the saffron yellow centre of a lotus, the wide-eyed goddess trammels a supine male whose arms stretch overhead as if in surrender. In a shade just deeper than that of her body, a red curtain of flames provides the backdrop against which eight members of her entourage dance, their arms aloft with hand drums and skull cups. Six other dakinis appear in the lower register and another eight in the side registers, indicating that the painting represents a mandala or sacred assembly associated with the goddess.

Against a dark blue ground behind the goddess are eight cremation grounds (shmashana), each bound by streams. Their names vary from text to text, but a standard group includes: Candogra ("Terrible and Frightening"), Gahvara, ("Impenetrable Abyss "), Jvalakulakaranka ("Blazing Skull"), Vibhisana ("Terrifying"), Laksmyarama ("Laksmi's Garden"), Ghorandhakara ("Frightening Darkness"), Kilakilarava ("Shrieks of Joy"), and Attattahasa ("Boisterous Laughter"). Myth associates these eight with sites of Indian mediaeval cremation grounds, where yogis and yoginis would convene for meditation and Tantric rites. The bodhisattvas and their enchanting mounts in these narrative scenes are among the finer passages of the painting. The figures of Indian and Tibetan Buddhist masters in the top and side registers are also beautifully painted. Each is imbued with a distinctive character, costume, coiffure, facial features, and demeanour. Although it is difficult to ascertain their identities or their particular lineage, it is clear that the three figures with bare or partially bare torsos are Indian Esoteric masters (mahasiddha). Figures in red robes covering both shoulders (with or without a peaked yellow cap) are Indian monks. Tibetan monks wear wide-brimmed yellow caps and blue or white robes covered by red, saffron or white outer robes. One figure wears the yellow sleeveless vest, red robe and yellow outer robe that became the traditional manner of depicting ordained monks certainly by the early thirteenth century (see monks thus dressed in a c. 1200 painting of Taklung Founder Tashipal in Kossak and Singer, ‘sacred visions’, pp. 91-93). The white-robed figure in the lower left corner acts as sacrificiant, holding a golden lotus, probably an incense burner. Before him is a tall table bearing a stupa, flowers, and against which are crossed fly whisks; lower tables bear other offerings. A c. late twelfth or early thirteenth century date may be proffered. The monks' diverse costumes and flat caps most commonly appear in c. twelfth century paintings. (e.g., a c. 1100 Chakrasamvara mandala published in Kossak and Singer, ‘Sacred Visions,’ pp. 2-53; a c. late eleventh-twelfth century painted bookcover, also in Kossak and Singer, pp. 70-71; and ac. Twelfth century Double Portrait, op. cit., pp. 76-77) The figure of Vajravarahi and those of her entourage are not far from those in a Vajravarahi Mandala which can be dated to c. 1200. (Kossak and Singer, ‘Sacred Visions’, pp. 96-99.) Similarities can also be drawn with a c. first half thirteenth century Vajravarahi painting in a private collection. (Ibid., pp. 100-01)