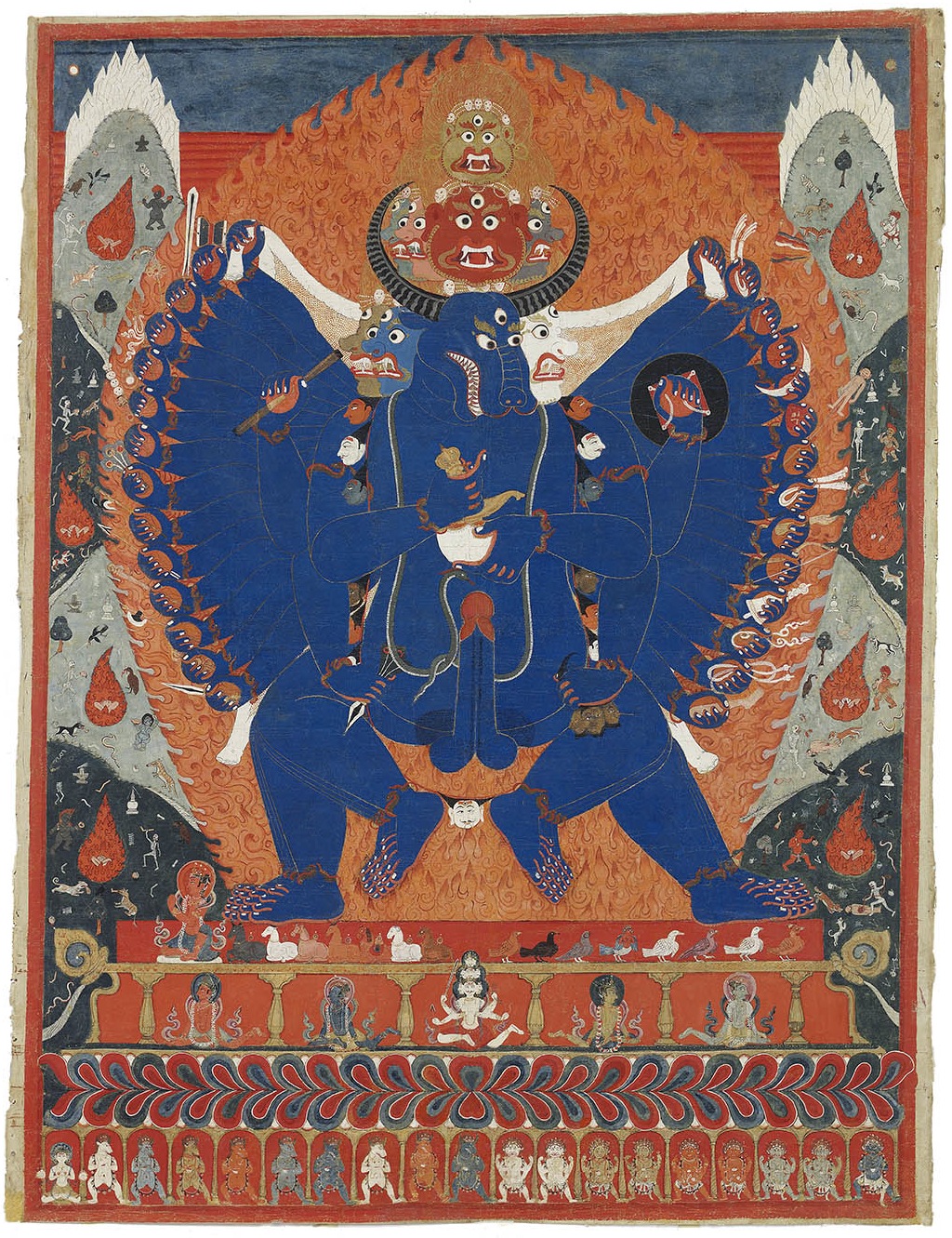 This unusual painting is of a rare type, the known examples of which seem to have been produced by one or more workshops from the late 18th century. The only other examples so far known are in the Bhaktapur Art Gallery in Bhaktapur where they form part of a large group of paintings on cloth and on paper in a similar style. Two examples from this corpus were published in the 1966 publication Nepali Kala, by Ramesh Jung Thapa et all, under the auspices of the Department of Archeology of whom he was then the Director (see appendix 1) and again by Ernst and Rose Waldschmidt in their 1968 book Nepal: art treasures from the Himalayas the translation of a catalogue in German for an unprecedented early exhibition in Essen of Nepali art from the then kingdom (see appendix 2).

The iconographical characteristics of this Vajrabhairava correspond to the description given in canonical texts of the god as noted by Waldschmidt:  black in colour (or dark blue as we see here) with sixteen feet, thirty-four hands and nine heads.

This depiction of Vajrabhairava is unprecedented for its vigour and power; the proportions and general delineation of this powerful tantric Buddhist deity are quite different from the Tibetan representations with which we are considerably more familiar. The god is depicted alone, without consort; but his huge phallus is shown vigourously erect. He faces somewhat to his right with his principal buffalo head, notable for its huge snout and elongated grimacing mouth filled with sharp white teeth; while the outer rank of legs strides to the left on a layered base, which consists of an architectural level whose niches are populated by other aspects of Yama, surmounted by a multicoloured lotus further surmounted by another architectural framework whose niches are filled with other subsidiary deities, surmounted once more by a crowd of birds and animals forming the god's actual seat.

The horizon in the upper background is a blue sky above with a sea of blood below against which are framed snowcapped hills. There are four such hills on each side of the painting, alternatively black and grey, and on them are depicted the eight great smashanas, burning grounds, that are the traditional environment of the tantric mandala in Himalayan art. These are populated by all the elements of the cremation ground that we would expect: cremation fire, tree, stupa, lingam, various body parts, and the protective form of bhairava; but we do not see the Mahasiddha often found in Nepali depictions.

The figure of the Vajrabhairava is very similar to an example in the Bhaktapur museum (Thapa, plate XXXII B; Waldschmidt pl. 80) but in that painting the background is treated very differently, while the treatment of the cremation grounds in our example resembles another painting, of Mahasamvara, also found in the Bhaktapur Museum (Thapa, plate XXXIV A; Waldschmidt, pl. 81). It’s likely that these two paintings and the present painting are the product of the same or a few closely related ateliers.