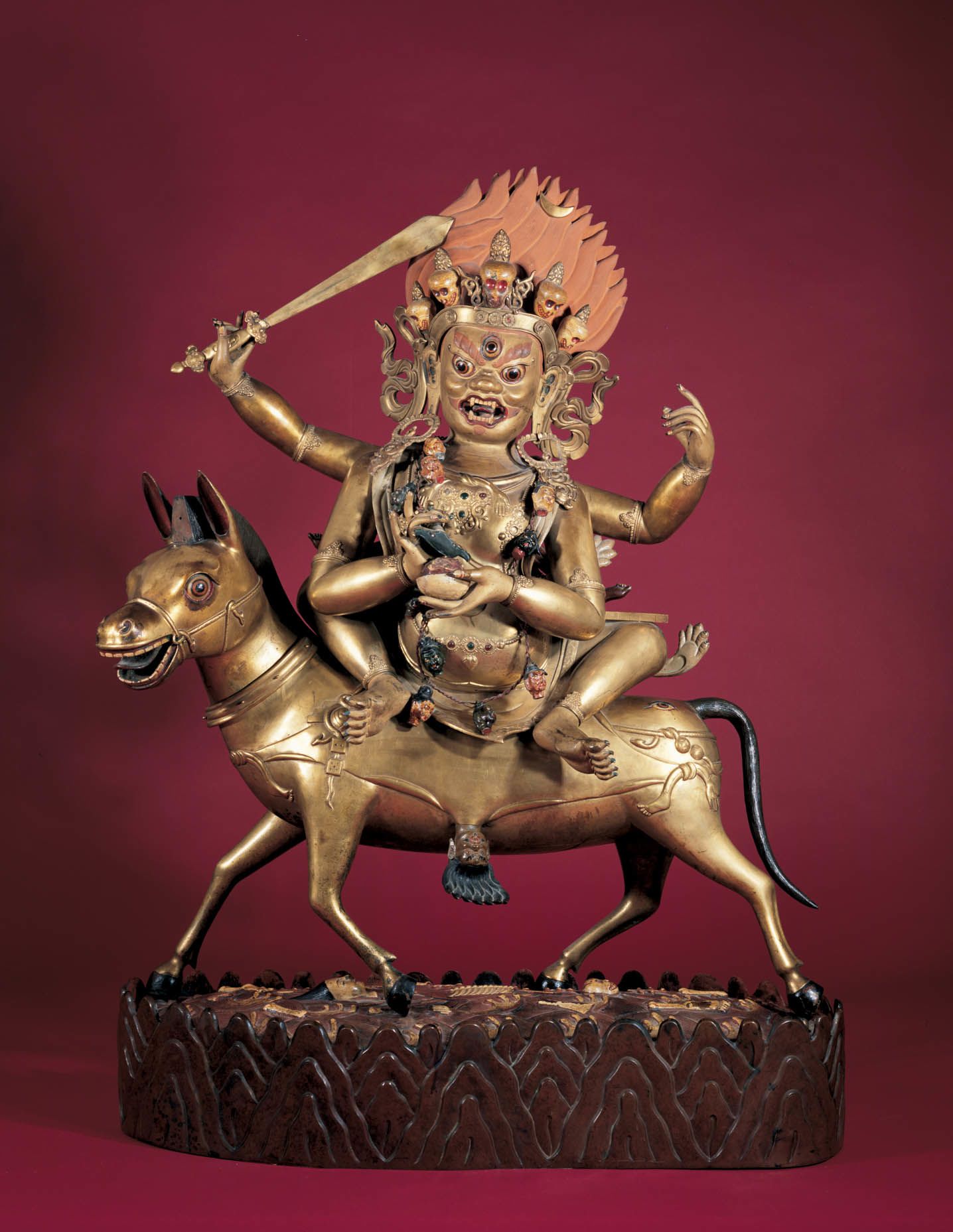 "The ferocious goddess is seated side-saddle on the back of her mule. The animal stands in a river of blood and human remains, surrounded by stylised mountains. Upon its back, a flayed human skin said to be that of Lhamo's own son, is lad, and the mule is otherwise adorned with a pair of dice, coiled snakes, a bridle and collar, and two balls below an eye on its flank. Lhamo holds her customary attributes: a kartrika (chopper) and kapala (skull cup) in her primary hands, and a sword in her raised secondary right hand. Around her neck hangs a gruesome garland of severed heads, and she wears the jewels of a bodhisattva: anklets, bracelets, armlets, a girdle, a necklace and a diadem with flowing ribbons. Her ferocious expression and flaming red hair serve to impress her power on the worshipper.

"This sculpture of Lhamo bears significant similarities to the large images collected by Sven Hedin in the 1930's from a deserted and abandoned temple, the Epi Khlakha Sume, and which are now housed in the Folkens Musuem Etnografiska in Stockholm.

"Large images of this type were made in Dolonnor, Mongolia, where there was a centre for the production of Buddhist images. The three figures in the Yonghegong were most likely made by the same artists.

"Lhamo is one of the 'eight terrible ones' (the defenders of the law) or Dharmapala, Tantric divinities with the rank of Bodhisattva dealing mercilessly with all enemies and detractors of Buddhism. They are shown in ferocious form, to inspire fear in their enemies. It is believed that they were first instructed and brought into the Buddhist pantheon by Padmasambhava in the eighth century. Lhamo is the only female representative of the Dharmapala. The other seven are: Tsangspa, Begtse, Yama, Kubera, Hayagriva, Mahakala and Yamantaka.

"Lhamo, like most of her Dharmapala compatrious, with the exception of Kubera and Tsangspa, wears a crown of five skulls, each surmounted by a flaming pearl, and the hair stands up in the form of a flame. There is also a third eye and angry expression, as well as a garland of severed heads. They are often draped with tiger, elephant or human skins."