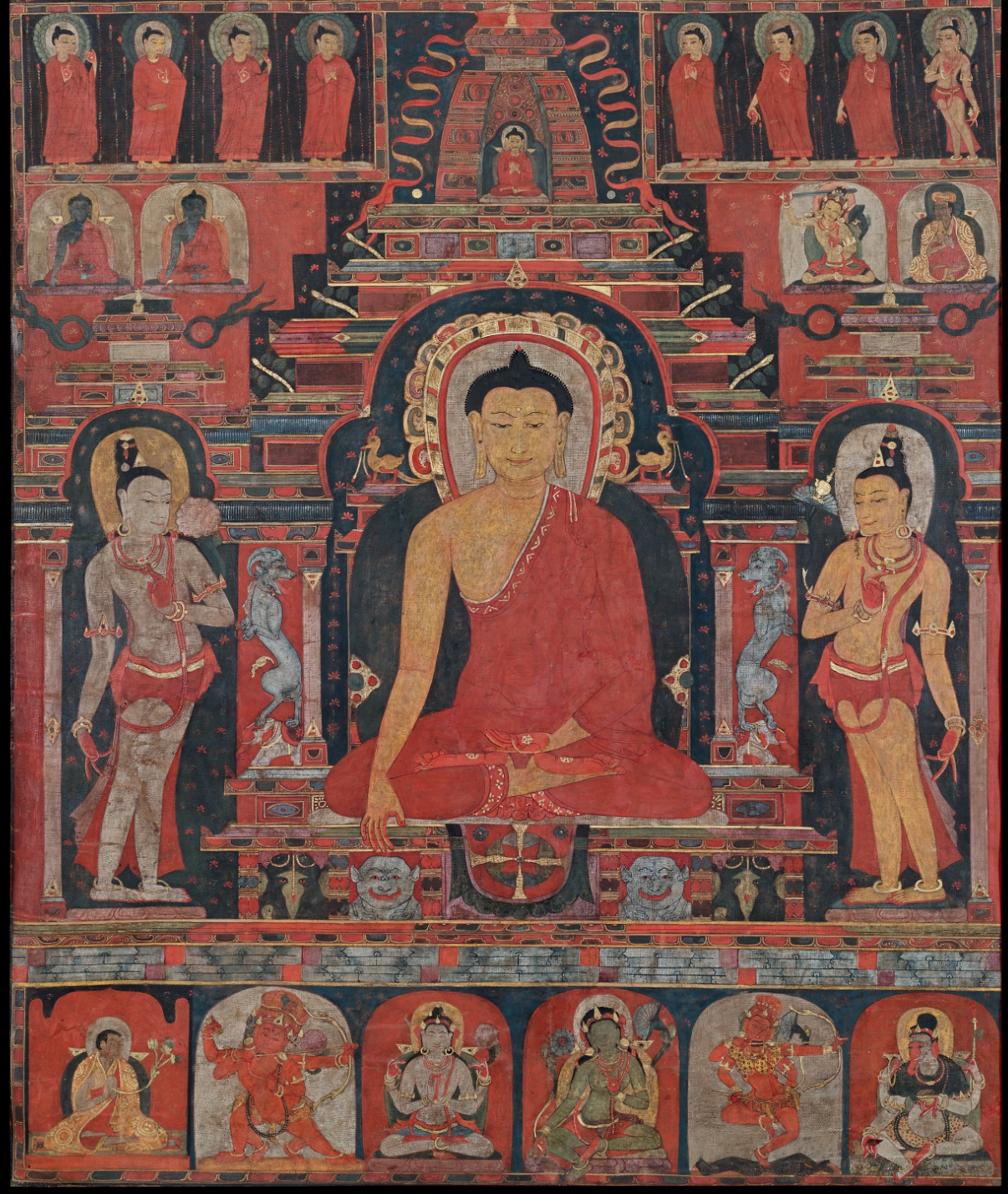 At the center of this painting is a representation of the historic Buddha Shakyamuni seated on a pedestal inside a shrine at the Mahabodhi Temple Complex in Bodh Gaya, India. The shrine was constructed beside the Bodhi Tree that sheltered Shakyamuni as he remained in the perfect equanimity of meditation while being taunted by the demons of Mara. At this site—with his right hand extended, palm down—he called the Earth to witness his achievement of Enlightenment.

In this work, the Buddha is depicted in monastic robes; he extends his right hand, palm down, as if touching the Earth. The shape of Mahabodhi Temple is faithfully rendered as a tiered stupa; from its apex, long multicolour banners flow and twirl. The temple’s spire contains a smaller image of the Buddha, his hands forming the dharmachakra mudra (turning of the wheel of the law), the gesture of teaching. Buddha figures flank the temple’s spire: the seven standing Buddhas in monastic robes represent the seven Buddhas of past eras; the youthful standing figure in a red dhoti portrays the Buddha of the future, Maitreya.

Beneath the standing figures, at far left, is a representation of the Buddha of Medicine; next to him is the Buddha Akshobhya. Opposite them, Manjushri, the Bodhisattva of Wisdom, is rendered with his characteristic attributes—the book of the Perfection of Wisdom (Prajnaparamita) and the sword that cuts through the clouds of ignorance—next to a Tibetan monk. Although no inscription identifies the monk, he wears an unusual low yellow hat similar to those of lamas associated with the Kagyu monastic school.  (1)

The lower register shows six figures: a Tibetan monk; the protective deity Hayagriva; Shadakshari Avalokiteshvara; Green Tara; a four-arm aspect of Kurukulla, holding her characteristic attributes of the bow and arrow; and the elephant-headed deity, Ganesh, the god of prosperity, here wearing a blouse that is usually only worn by females, making the gender ambiguous.  (2)

The present painting is inscribed on the reverse, with a prayer written in Tibetan language and Sanskrit mantra and prayer written in Tibetan letters. Rather than historic data, the inscriptions consist exclusively of the mantra and prayers. The syllables “OM AH HUM” are aligned vertically, followed by six lines of prayers and the mantra. In the middle of the six lines, the additional syllables “AH” and “HUM” are inserted in relation to the vertically aligned letters above. The inscription starts with the Ye dharma prayer (Ye dharma hetu prabhava hetum tesam tathagatah, which translates as follows:

Of the factors of existence (Dharma) rising from a cause, the Tathagata has spoken; of their cessation, too: He the great Buddhist ascetic (Mahasramana), who speaks truthfully (evamvadi).

This prayer continues for the first two lines. The third line is illegible in the left half, but the right half reads, “Ma ha muni Maha muni Ye...Sva ha Vajra”, referring to Shakyamuni as the ‘great’ (maha) ‘sage’ (muni). The fourth line is illegible on the left-hand side, but the right begins with the Forbearance prayer in Tibetan language, an excerpt from the Pratimoksha sutra, which continues through to the end of the sixth and final line of verses. This prayer (bzod pa dka’ thub pa dam pa bzod pa ni mya ngan ‘das pa mchog shes rgyal bas gsungs// rab tu ‘byung ba gzhan la gnod pa dang ‘tshe ba dge slong ma yin no) may be translated as follows:

“Forbearance is the supreme ascetic practice, forbearance is supreme nirvana”, said the Buddha(s). The renunciate who harms another and who injures another is no Sramana [Buddhist ascetic].

Finally, in this portrait, the Buddha is shown with an ovoid halo adorned with lateral gold rings representing his aura. This treatment is known from early Pala paintings in Tibet, such as the Tara thangka in the John and Berthe Ford Collection (ca. 1175)(3)  and a Shadakshari Avalokiteshvara of twelfth century (private collection). Both works feature very large gold rings around the Buddha’s halo. There is a Shadakshari Avalokiteshvara with narrower, more controlled loops that are visible in this Shakyamuni, and which is probably to be attributed to thirteenth century.(4)  Indian scholar Pratapaditya Pal has studied a portrait of a Tibetan hierarch, (5)  which he attributed to ca. 1175, in which the Buddha’s halo is adorned with the same lateral rings present on the Shakyamuni here, as well as a very similar red background arch for the consecrating monk in the lower register. The factors tend to suggest an attribution of late twelfth to the thirteenth century for this thangka portrait of Shakyamuni.

(2) See Pratapaditya Pal, Himalayas: An Aesthetic Adventure, 2003: pl. 120, for another Ganesh with such a blouse, on a portrait of a Tibetan hierarch attributed to ca. 1175.

(3) See Pratapaditya Pal and Hiram Woodward, Desire and Devotion: Art from India, Nepal, and Tibet in the John and Berthe Ford Collection, 2001: pl. 131.