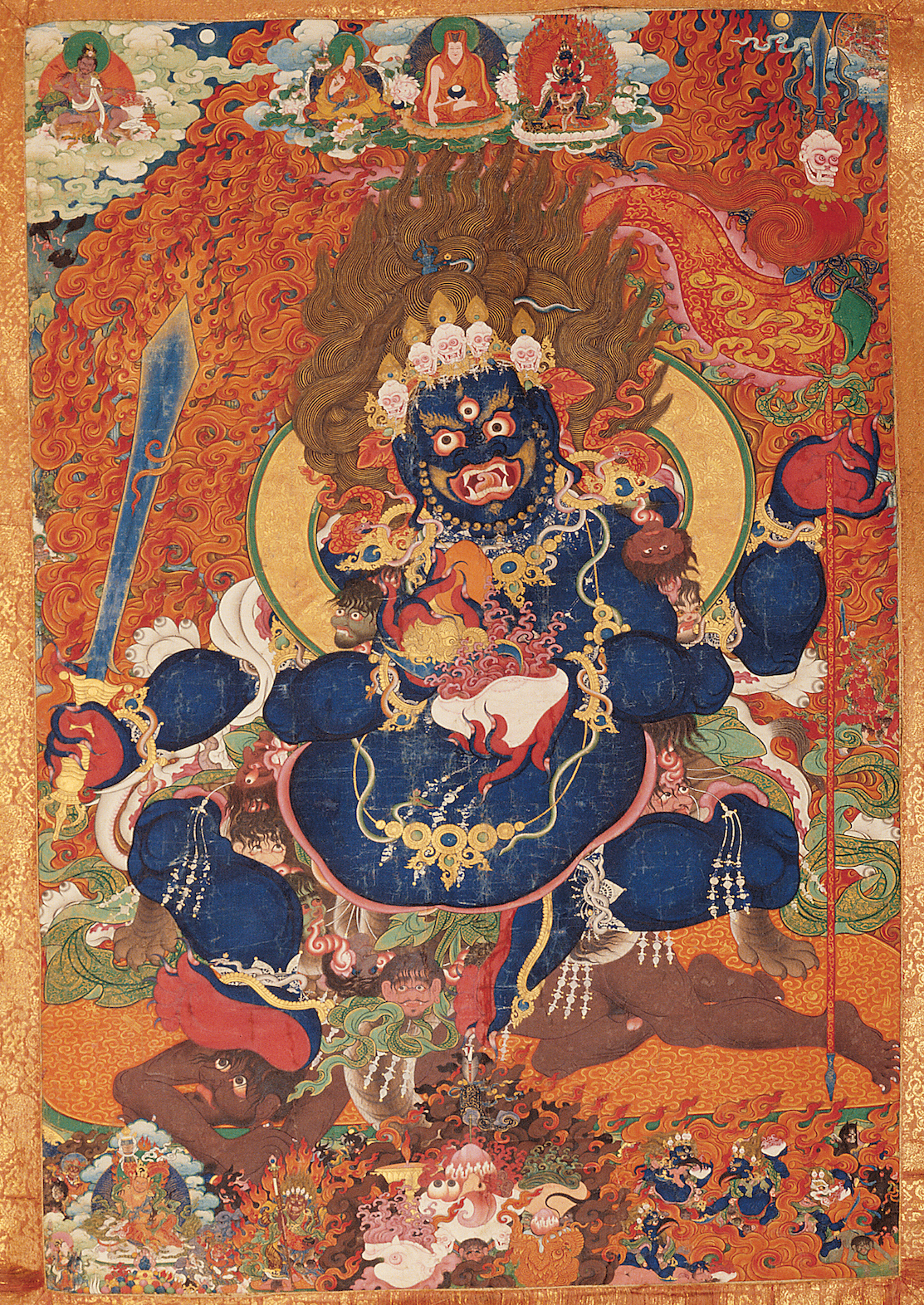 "...Shri Jnana Nata Mahakala, the Great Solitary One, with a body blue-black in colour, dark like the end of time, with three round red eyes, quickly glancing, a radiant face with bared fangs, tongue lolling. The hair, eyebrows, moustache and beard are yellow like a blazing fire. There are four arms, the first right [hand] holds a coconut fruit that is like a [human] heart. The first left [hand] holds a blood filled skullcup at the level of the heart. The lower right [hand] holds a blazing sword aloft. The lower left holds a katvanga staff upraised marked with a trident. With five dry human skulls as a crown, fifty wet dripping heads as a necklace, a jewel at the crown [of the head], four races of snakes [ornaments] and adorned with all of the bone ornaments, wearing a lower garment of tiger skin, seated in a playful manner within a swirling heap of pristine awareness fire." (Karma Ngagwang Yontan Gyatso. Dam Ngag Dzo, vol.10 page 430).

In addition to the description from a standard liturgical text (above), Mahakala has a blue coloured half vajra adorning the crown of the head along with a snake tied in the hair. The first right hand holds the light brown coconut but also holds a curved knife with a gold ornamented hilt and blue curved blade. In the second left hand the katvanga staff is more like a typical trident further decorated with a single skull and large red flag. A spear tip at the bottom of the shaft is pressed to the ground. Mahakala is also seated atop a prone figure of a dark brown man, naked and dishevelled.

At the top center is Lama Shang Yudragpa Tsondru Dragpa (1122-1193 [Tbrc P1857]). He was a student of Gonpo Tsultrim Nyingpo (sgom pa tshul khrims snying po, 1116-1169) a nephew of Gampopa. He was also a student of Gva Lotsawa (rgwa lo tsA ba). The Tibetan lineage of the Four-armed Mahakala begins with Gva Lotsawa and for the specific lineage of Mahakala that continued from Lama Shang that line of descent is known as the Tsal Tradition (named after his monastery Tsal Gungtang). From this monastery a separate school of Kagyu originated called the Tsalpa Kagyu Tradition. The Dalai Lama Incarnation Lineage also records Lama Shang as a Dalai Lama pre-incarnation. An early 19th century painting by the Eastern Tibetan artist Khazi Lhazo includes an image of Shang Yudragpa which is very similar to the image of Lama Shang in this composition.

At the viewer's left side of Lama Shang is the 8th Dalai Lama, Jampal Gyatso (1758-1804 [Tbrc P109]). He wears monastic robes and a yellow pandita hat typical of the Gelug Tradition of Tibetan Buddhism. Held in the proper right hand is a white lotus stem with the flower supporting a book and upright sword - the regular attributes of the 8th Dalai Lama. In the left hand is a Dharma Wheel indicating his sovereignty over all of Tibet. An inscription below identifies him as 'Lord of the Snow Mountains marked by Manjushri.' This is a reference to the long line of the Dalai Lamas as the spiritual and temporal rulers of Tibet with a smaller reference to Manjushri and his two attributes of a sword and a book which are associated here with the person of the 8th Dalai Lama.

On the viewer's right side of Lama Shang is Chakrasamvara Heruka a meditational deity that is related to the Chaturbhuja (four armed) Mahakala. "Chakrasamvara, blue in colour, the right foot is extended pressing on red Kalaratri and the left drawn in [pressing] on black Bhairava. With one face and two hands, three eyes, the right hand holds a vajra and the left a bell; embracing the consort, with a crown of five dry human heads as a crown, a necklace of fifty wet, and adorned with the six bone ornaments. [Chakrasamvara is] embraced by the consort Vajravarahi, red in colour, with one face and two hands. The right hand holds a curved knife pointed to the ten directions. The left holds a skullcup filled with the five nectars and embraces the Father. [She is] adorned with a crown of five dry human heads, a [necklace] of fifty dry [heads] and the five bone ornaments." (Jamyang Kyentse Wangpo, 1820-1892).

At the top left corner of the composition is the Indian Mahasiddha Saraha. He is brown in colour with long hair and a beard, holding an arrow. It is commonly said that he was an arrow maker by profession. Saraha belongs to the famous group of predominantly Indian Tantric practitioners known as the Eighty-four Mahasiddhas.

In the top right corner of the composition is the 'Very Secret' Hayagriva with consort - a special practice of Sera Monastery. He functions as a meditational deity and further helps to identify the original ownership and sponsorship of the painting.

At the middle right side, half way down the composition, is the small form of Chandika, female, red in colour, with one face and four arms. She is a retinue deity within the mandala of Chaturbhuja Mahakala.At the bottom left corner of the composition is Vaishravana Riding a Lion. He is considered both a protector and a wealth deity. In this context he is primarily a wealth deity. Behind him on the left side is the special worldly protector deity Dorje Ta'og principally associated with Sera Monastery. Below that is the female worldly goddess Dorje Yudronma riding on a horse. Below and to the right of Vaishravana is Dorje Legpa riding a lion. To the right again is a standing figure of Bhagavan Mahakala, maroon in colour, holding a staff and a bowl.
‍

At the bottom right side are four retinue figures from the mandala of Chaturbhuja Mahakala. Three are raven-faced and one is lion-faced, all female, all wrathful.