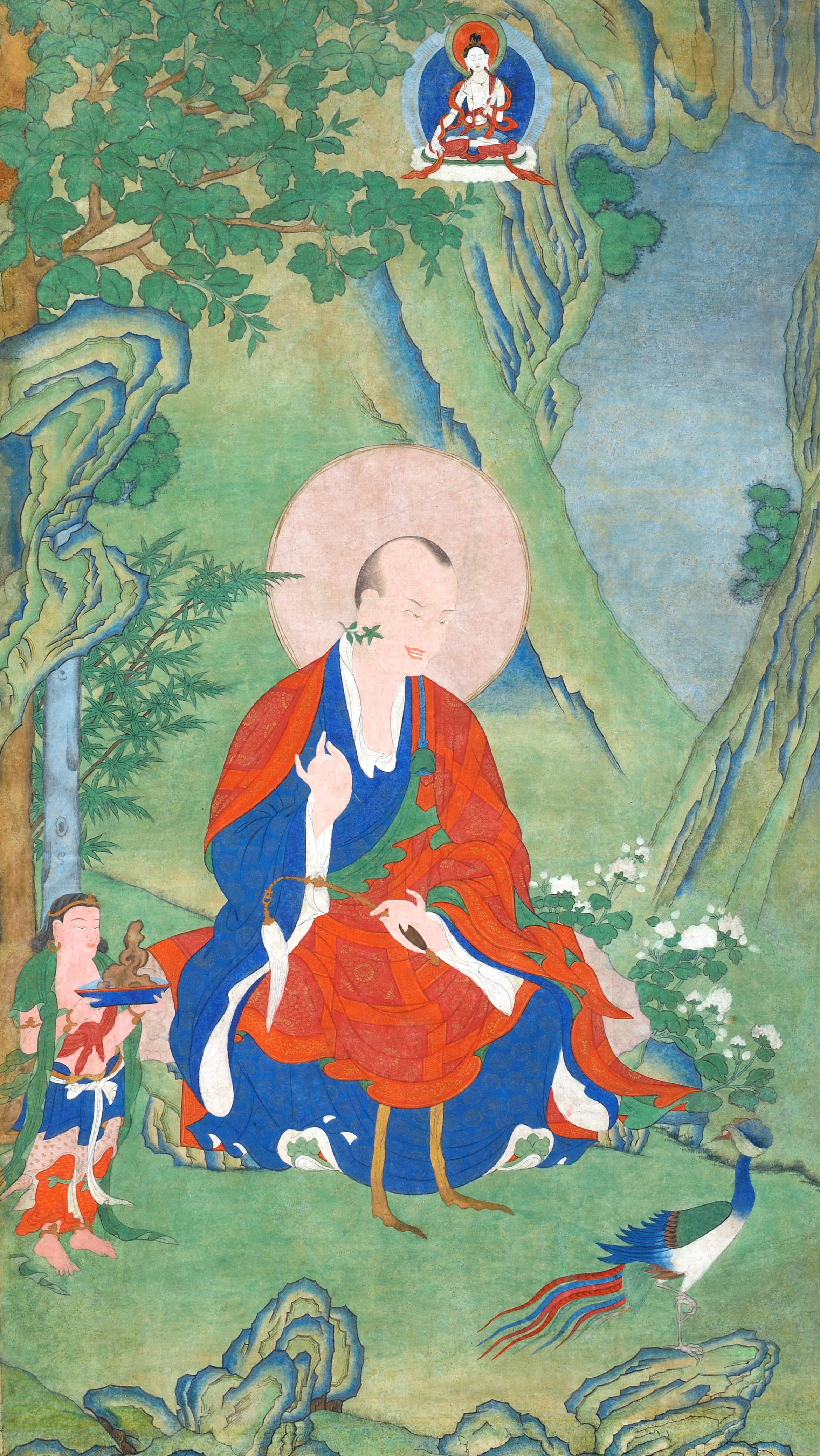 According to a Sakya liturgical verse, ‘In the mountain cave of Seven-leaves is the noble elder Vanavasin, surrounded by 1,400 arhats; homage to the One with a pointing gesture and holding a fly whisk’.

In his usual iconographic form, Vanavasin points with his right hand while holding a fly whisk in his left. This depiction follows the Tibetan verse believed to be translated from the original Sanskrit, Praise to the Sixteen Arhats.

This composition would have been part of a twenty-three painting set. Typically, the full group would include the Shakyamuni Buddha, the two foremost students Shariputra and Maudgalyayana, the Sixteen Great Elders, the attendant Dharmatala, the patron Hvashang and the Four Direction Kings: Vaishravana, Virupaksha, Dhritarashtra and Virudhaka. There are twenty-five figures in the group, but only twenty-three paintings in the set. With painted compositions, the two foremost students are almost always depicted standing alongside Shakyamuni in a single scene.

The composition, layout and colour scheme of this work are based on a set of paintings commissioned originally by the Yongle Emperor in the early fifteenth century. Many copies of this famous set were created in later centuries, and even copied by other influential Buddhist emperors, such as Qianlong in the eighteenth century.
‍

At the top centre is the female deity of longevity, the White Tara, ‘...with a hue white like an autumn moon – radiant like a stainless crystal jewel, shining with rays of light, one face, two hands, and having three eyes; with the conduct of having sixteen years of age. The right hand is in the mudra of supreme generosity; the left holds with the thumb and forefinger the stem of a white utpala (lotus) to the heart with the petals blossoming at the ear. Representing the Buddhas of the three times, the single stem is divided into three, in the middle is a blossoming flower, the right in fruition, the left in the form of a bud; adorned with various jewel ornaments; having various silk upper garments and a lower garment of red silk; seated with the legs in vajra posture. The palms of the hands and feet each have an eye – the seven eyes of pristine awareness’. (Sachen Ngagwang Kunga Lodro, 1729–1783; sGrub Thabs Kun bTus, vol. 1, fol. 65–73).