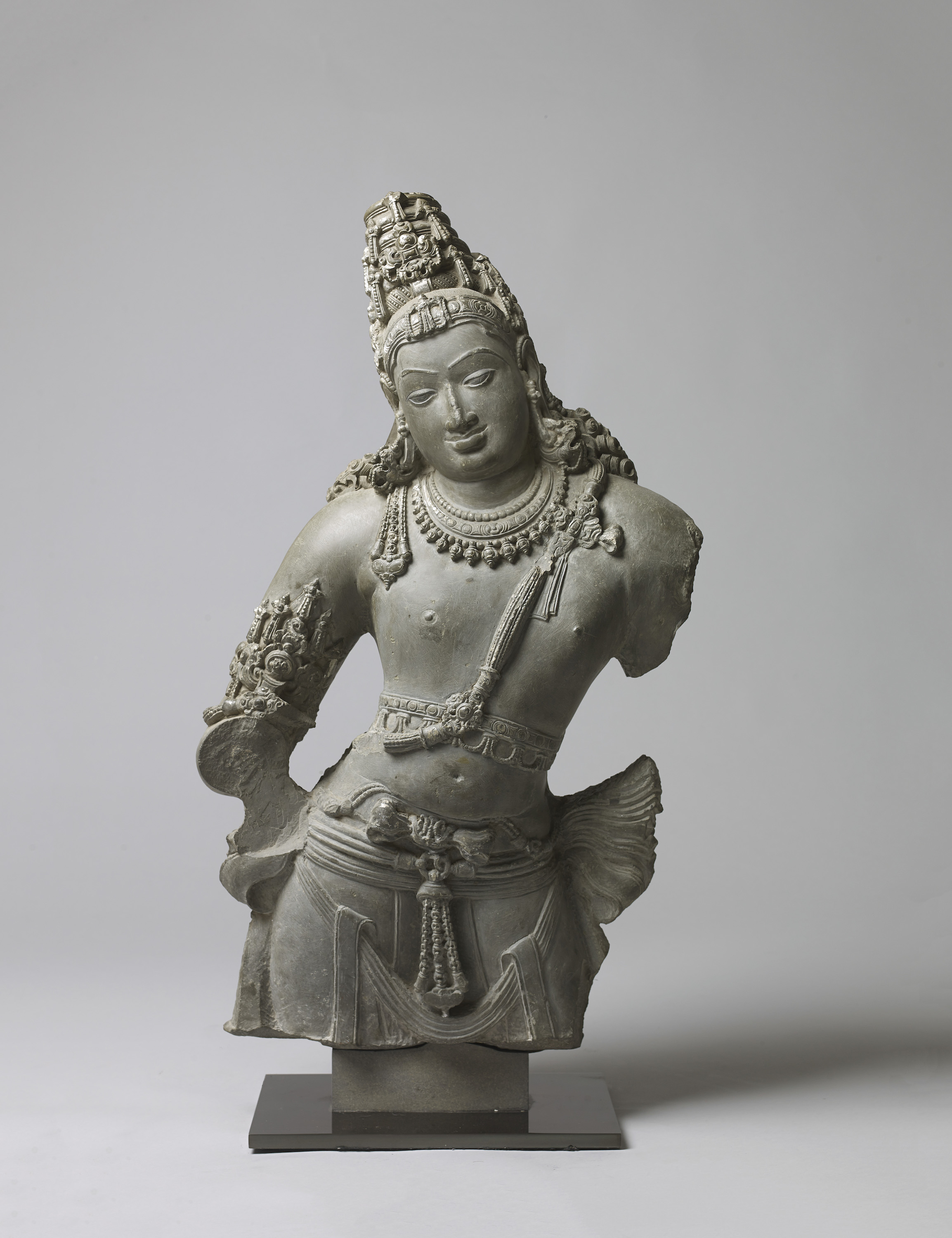 A vital concept in Indian sculpture through the ages was prana, defined as an inner-breath tied to cosmic-synergy. Prana rests upon breath-control and so relates directly to yoga and divinity. Sculptors captured prana by suggesting a strong but subtle pressure emitting outward from within the body. In addition, Indian artists strove for the idealization of the human figure, thereby highlighting the divine and purity; sculptors consciously eschewed verisimilitude to nature.  Ancient Indian sculpture therefore differed fundamentally from ‘naturalistic’ classical Greek and Roman sculpture and mediaeval European stonework.

Prana, or inner-breath, is enhanced by carefully juxtaposing ornaments against plain surfaces. Elaborate necklaces, armbands and other ornaments were executed in both shallow and deep relief on the surface, creating an engaging multi-dimensional visual experience. In our example, ornaments take up at least half the surface area but they add movement and interest to the composition and do not dominate. For example, the thick sacred-thread, or upavita, extending diagonally across the chest is placed directly over a band stretching tightly across mid torso, creating multiple surfaces. Even more engaging is the circular clasp making up the waist band, from which a bell-shaped ornament emits three strands of pearls joined at the end by a crescent shaped motif. In the hands of a lesser artist, this design would appear clumsy, troubling to our eyes. Here, we revel in the complexity of this intricate motif as it blends effortlessly into the composition as a whole.

Another characteristic of Indian sculpture is the subtle sway in the torso, the body depicted slightly off axis. This tilting of the figure is achieved by three bends, at the hips, shoulders and head. This special pose is known as tribhanga in ancient Indian aesthetics, translated from the Sanskrit as ‘three-bends.’

The identity of this figure is uncertain, since there are too few attributes. Most major Hindu deities in the Hindu pantheon are four-armed, but iconographic manuals occasionally specify two arms, even for Shiva and Vishnu. This figure may have been an attendant deity, in either a Hindu or Jain context. The right hand may have held a fly-whisk, while the second hand may have rested on the figure’s leg or held a fruit. Such a composition is not uncommon (Pal 2003: I. 293).  Alternatively, the right hand may have been raised in the ‘reassurance gesture’, or abhaya-mudra, while the left may have been lowered and rested on the upper part of the leg, the katyavalambita-hasta-mudra.

The deity was likely crafted in central India, a region known as the Deccan and responsible for two of India’s greatest World Heritage sites, Ajanta and Ellora. The earliest leading patrons in the Deccan were the Chalukyas of Badami whose sculpture blended traditions from both North and South India. Excavated cave-temples, such as at Badami, and free-standing temples, notably at Pattadakal and Aihole, were products of Chalukya patronage. The Chalukyas of Badami spawned other dynasties in the Deccan, such as the Eastern Chalukyas of Vengi. The Chalukya stylistic idiom eventually evolved into the flamboyant style associated with the Hoysalas, best known for Belur and Halebid. Other related styles emerged in Andhra Pradesh, with the Nolambas based in Hemavati and the Kakatiyas of Palampet.

The life-size dimensions of this sculpture, its exquisite carving and composition, and its fine surface condition ensures this work of art an important place in the evolution of sculpture in the Deccan.