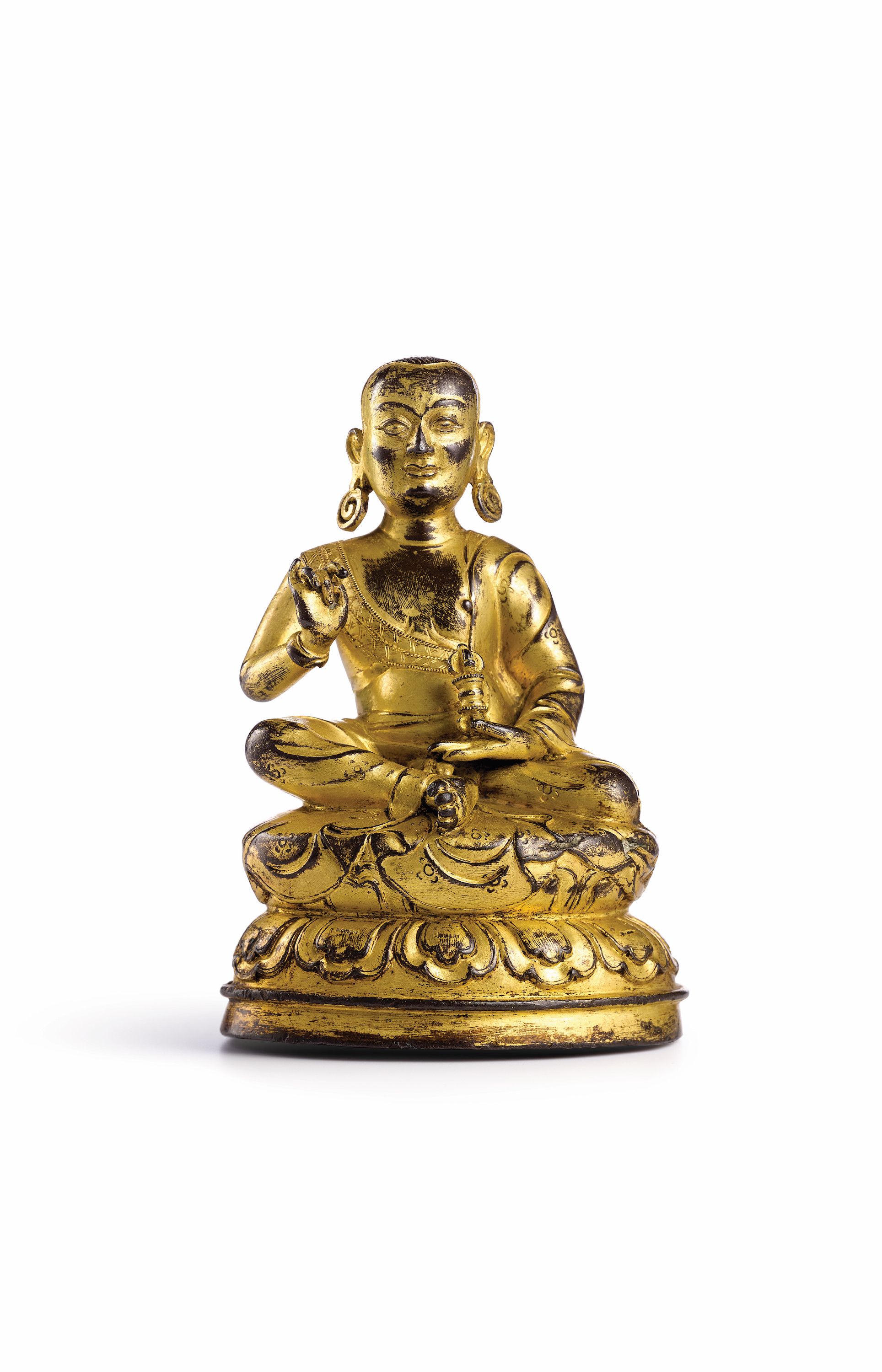 Seated in rajalilasana on a high double-lotus throne, the left arm hand in dhyanamudra and supporting a vajra, the right hand raised in karanamudra, the corpulent torso and rounded belly cloaked in a sanghati with foliate motif and falling into voluminous folds around the legs, further adorned with a meditation belt with geometric motif across the right shoulder, the face with a benign expression and framed by closely cropped hair and pendulous earlobes adorned with large circular earrings

This rousing, charismatic figure of Lhatsun Kunga Chögyam is depicted here seated upright and vibrantly alert. He is seated atop a high double-lotus throne covered in a textile with incised florets, which are further incised on his voluminous one-shouldered robe. Over his bare torso, he wears a meditation belt with geometric motif across the right shoulder. He is ornamented with a bracelet on the left wrist, and a large pair of spiral earrings in his extended lobes. He holds an upright vajra in the left hand, with the right hand raised in karanamudra.

The figure is identified by the Tibetan inscription on the sculpture verso reading: Homage to Lhatsun Kunga Chögyam. Chögyam is a common Tibetan abbreviation of the proper name Chökyi Gyatso, and the current work certainly depicts the Drukpa Kagyu lama, Lhatsun Kunga Chökyi Gyatso (1432-1505).

The latter is best known as one of the main teachers of beloved Buddhist saint, Drukpa Kunley, credited with introducing Buddhism into Bhutan. Drukpa Kunley, also referred to as the "Madman of Bhutan", is an historical figure infamous for his wildly unorthodox behaviour and practices regarding sexual decorum. He is often depicted bare-chested with the right shoulder wrapped in a meditation belt, as is the current figure of his guru, Lhatsun Kunga Chögyam. According to the spiritual biography of Drukpa Kunley, after imparting Tantric teachings to his disciple, Lhatsun Kunga Chögyam left him with the following admonition: "All dharma teachings must be meditated on. If you only recite the texts without meditating, your mind will become rigid."