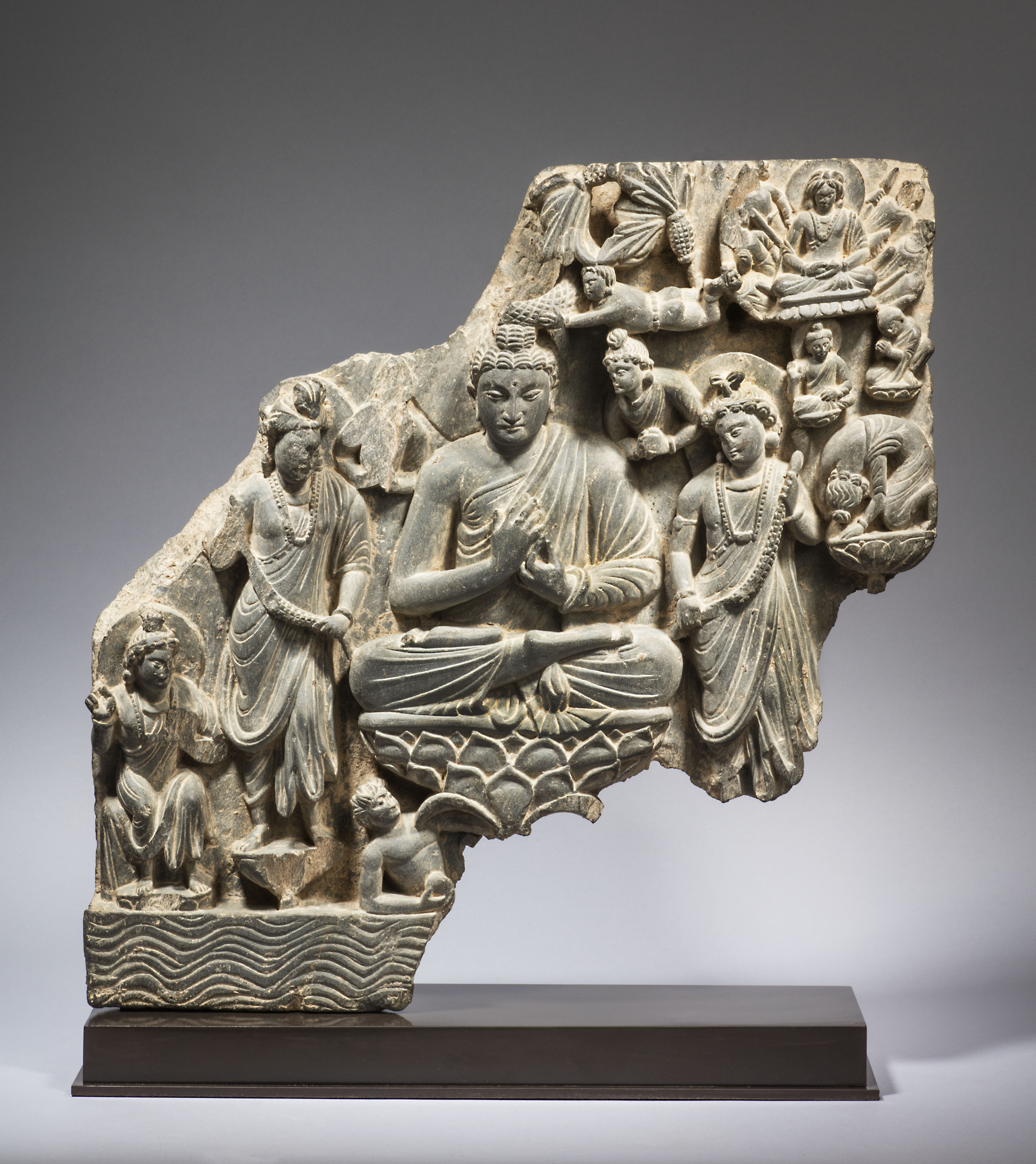 A finely carved fragmentary grey schist frieze in high relief and depicting a centrally placed seated Buddha framed by Bodhisattvas and further smaller figures to all sides.The sculpture features the Buddha seated cross-legged in dhyanasana the meditative position upon a tapering lotus pedestal, and wearing a typical robe or sanghati, his right shoulder exposed.  His hands are placed in the dharmacakra mudra, and he looks straight out at the viewer, his expression calm and contemplative.  Wavy hair is tied up in an usnisha and he is flanked to either side by a single Bodhisattva, each with a circular plain nimbus, flowing robes and a decorative chunky amulet necklace.  Both hold a thick garland of flowers as they look slightly down and towards the Buddha seated between them.  The left figure, standing on a small plain pedestal and wearing a turban could be Maitreya, as his fragmented arm could once have been held up in abhaya mudra.  The other Bodhisattva has hair in horizontal rows of curls to his forehead and a chignon above. A further smaller seated Bodhisattva with his right hand raised in abhaya mudra is positioned at the far left of the piece.Below the Buddha, part of a small muscular male figure can be seen supporting the lotus pedestal above.  This could be an Atlantes figure, loosely based on the Greek god Atlas. Framing the panel to the bottom is a wavy incised border perhaps suggesting a flowing stream or river. Positioned above the right shoulder of the Buddha are a group of small figures, including further seated representations of the Buddha, and a Bodhisattva. To the far right is a kneeling figure, possibly a further Bodhisattva, placed on a small lotus pedestal and bowing to the left.  Further unattributed figures, a prostrate or flying garland bearer and a large floral canopy fill the remaining ground.It is difficult to give a specific attribution to this frieze, and comparable published examples have been interpreted in differing ways. A similar sized schist frieze of a seated Buddha flanked to either side can be seen in Katsumi Tanabe, Gandharan Art from The Hirayama Collection, 2007, pg.107, II-14 and is referred to as a ‘Buddhist Triad’.  A. Foucher in his book on Gandharan sculpture suggests that a frieze with a central seated Buddha displaying the dharmacakra mudra and wearing a sanghati with his right shoulder exposed, could be The Miracle at Sravasti, when the Buddha displayed his power by performing miracles before a gathering of heretical masters including creating replicas of himself.  In our frieze, there are two smaller Buddhas to the right which may point to this attribution.  In Lyons & Ingholt, Gandharan Art In Pakistan, 1957, similar sculptures such as nos. 252-257 are labelled as The Preaching Buddha on Lotus Throne, but the authors state on pg.122 that they are all based on the Sravasti theme that Foucher suggests. This interpretation is also acknowledged by W. Zwalf in his book Gandhara Sculpture in the British Museum, Volume 1, London, pg. 126.  For further examples of Miracle of Sravasti friezes, see Isao Kurita, Gandharan Art I, The Buddha’s Life Story, Japan, pgs. 190 – 203.