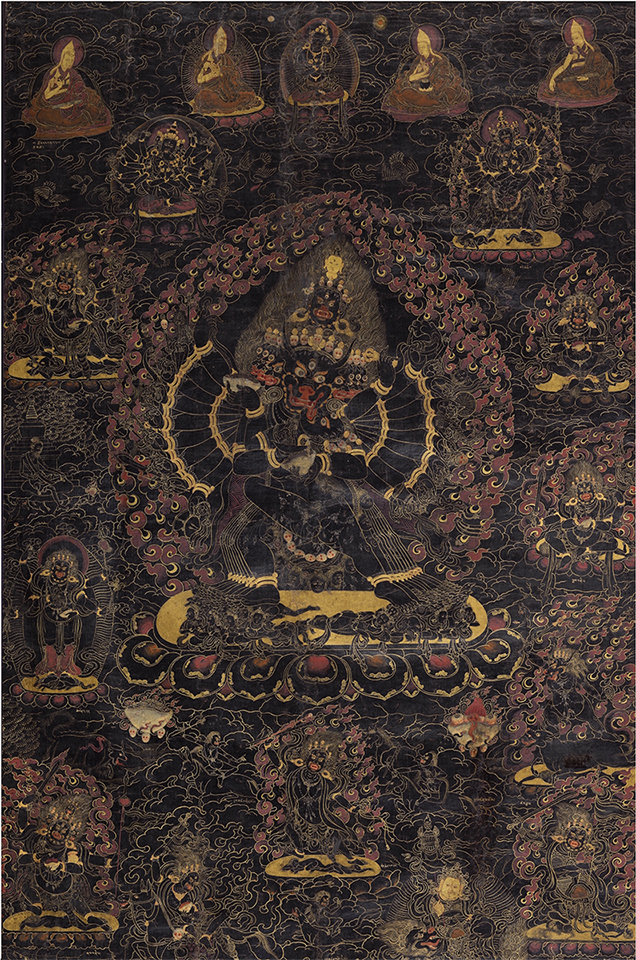 At the top centre of this work, Vajradhara is shown with Tsongkapa, the founder of the Gelug School of Tibetan Buddhism, and Jampal Gyatso, the 8th Dalai Lama, seated to the left. On the right side are Lobzang Yeshe, the 2nd (5th) Panchen Lama,[1] and Gendun Gyatso, the 2nd Dalai Lama.

The practice of Vajrabhairava is common to the three main Sarma schools of Tibetan Buddhism: Sakya, Kagyu and Gelug. Amongst the Sakya, the practice is counted as one of the four main tantric deities, along with Hevajra, Guhyasamaja and Chakrasamvara (Tibetan: gyu de shi). Amongst the various Kagyu schools, the Drigungpa are strong upholders of the practice. In the Gelug School, Vajrabhairava is the principal meditational deity taught for the Anuttarayoga practice, along with the meditational deities Akshobhyavajra Guhyasamaja and Chakrasamvara. There are numerous forms and styles of practice, from the very complex, with numerous deities, to the very concise, with a single Heruka form of one face and two arms. From amongst the many different lineages and teachings of Vajrabhairava to enter Tibet, it is said that the main ones were those of Rwa Lotsawa and Mal Lotsawa.

Wrathful deities of all types are typically painted onto a black background. This tradition began in the last half of the first millennium, and the literature is found in both Chapter Twenty-Five and Chapter Fifty of the Mahakala tantras. Each tantra has a separate chapter on the creation of a painting of Mahakala for personal ritual use. This tantric painting tradition was later expanded to include all wrathful figures, whether or not the artist or donor so chose to do so. In the nineteenth century, many Tibetan artists began to paint all forms of deities, peaceful and wrathful, as well as historical figures, on a black background, regardless of earlier traditions or tantric understanding.