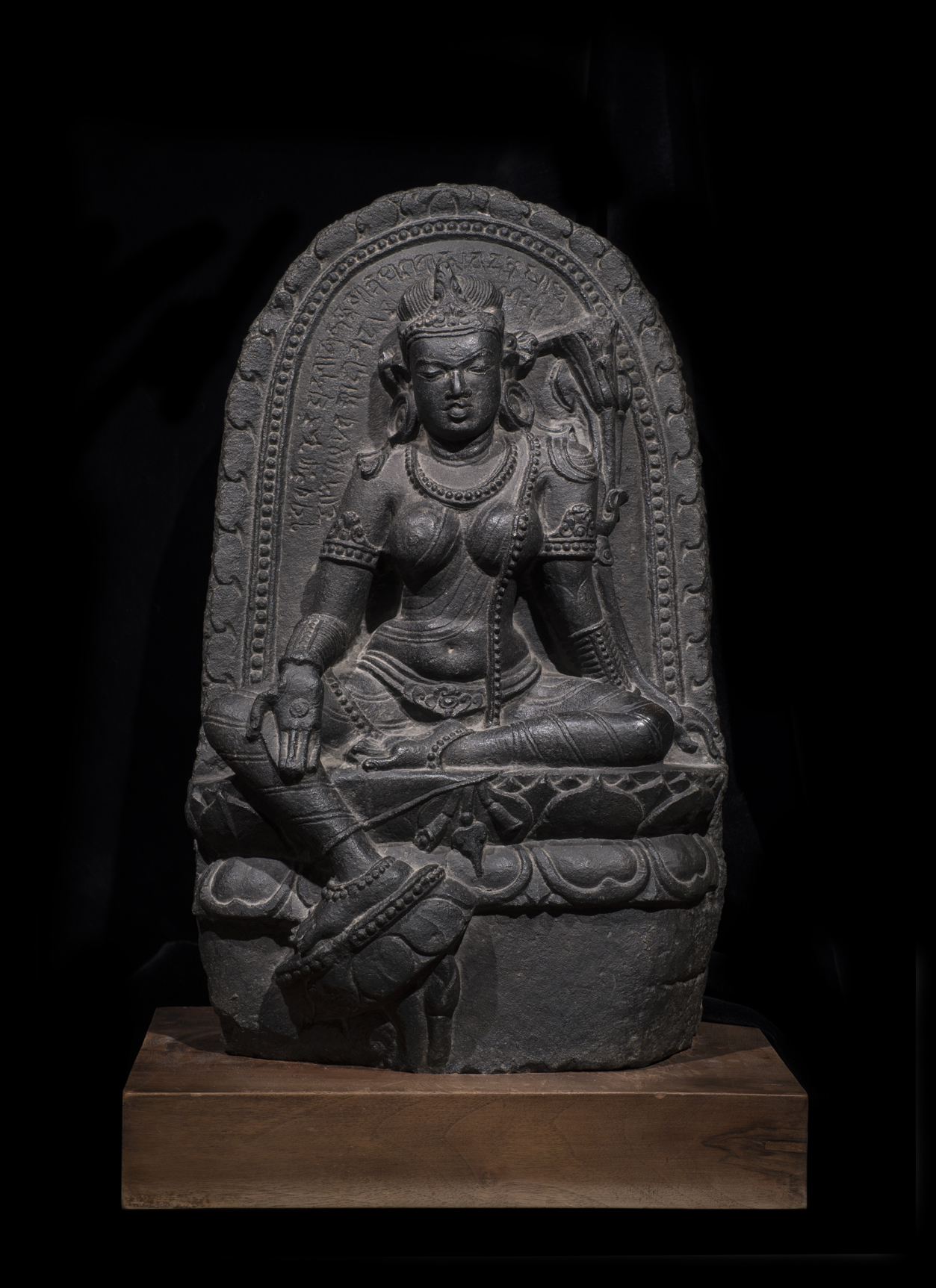 The goddess Śyama Tāra, or Green Tāra, is the consort of a Buddha named Amoghasiddhi, one of five principal Buddhas belonging to the complex pantheon of Mahayana Buddhism. These five are are considered ‘cosmic Buddhas’, that is, Buddhas with no direct connection to the historical Buddha Śākyamuni who attained enlightenment at Bodh Gaya. Each of these Mahayana Buddhas is associated with an individual consort, or Tārā. Amoghassidhi is green, or śyāma (Sanskrit) , and therefore his companion is known as the Green Tara.

The term tara has many meanings but in the Buddhist context, tara is a saviouress, or a guide to those on a spiritual journey.Her imagery became therefore very popular in medieval India and in civilizations that drew inspiration from Buddhist India, such as Nepal and Tibet.

The goddess sits at ease in the lalitāsana pose on a lotus throne, while her extended right hand signifies boon-bestowing, or the varada-mudrā. In her other hand is the long stemmed blue-lotus, or nīlotpala. These attributes can also be appreciate in illustrated manuscripts produced during the Pala period. Inscribed within the throne’s upper rim of the throne background is the so-called Buddhist creed, an invocation found ubiquitously on many Pala stone images:

“Of the phenomena born of cause, the Tathāgata [the Buddha], explicated all of those causes and their cessation. The Great Monk is the propounder of this Doctrine.”

Worship of Tara was especially significant in eastern India which was controlled by the Pala Dynasty, c. 750 - and 1200. In this period the greatest monasteries and temples were produced, such as at Nalanda and Vikramasila.

Two similar examples of a Green Tārā are in museum collections. Perhaps the best known is preserved in the Los Angeles County Museum while another is in the Brooklyn Museum. These objects have been dated to c. 9th century. This sculpture is a trifle stiffer in execution and so therefore perhaps can be dated to the 10th century.

Stone sculpture and bronzes created during the period of the Pala Dynasty is avidly sought by collectors, museums and connoisseurs. Indeed, there are no major museums in Europe or in North America without examples of Pala art.

Donald M. Stadtner was for many years an Associate Professor at the University of Texas, Austin, after receiving his Ph.D. in Indian art at the University of California, Berkeley. His publications include Ancient Pagan (2011), the Sacred Sites of Burma (2015) and the Sacred Sites of Sri Lanka (forthcoming, 2019). He is co-editor of The Buddhist Art of Myanmar (Asia Society, New York, 2016).