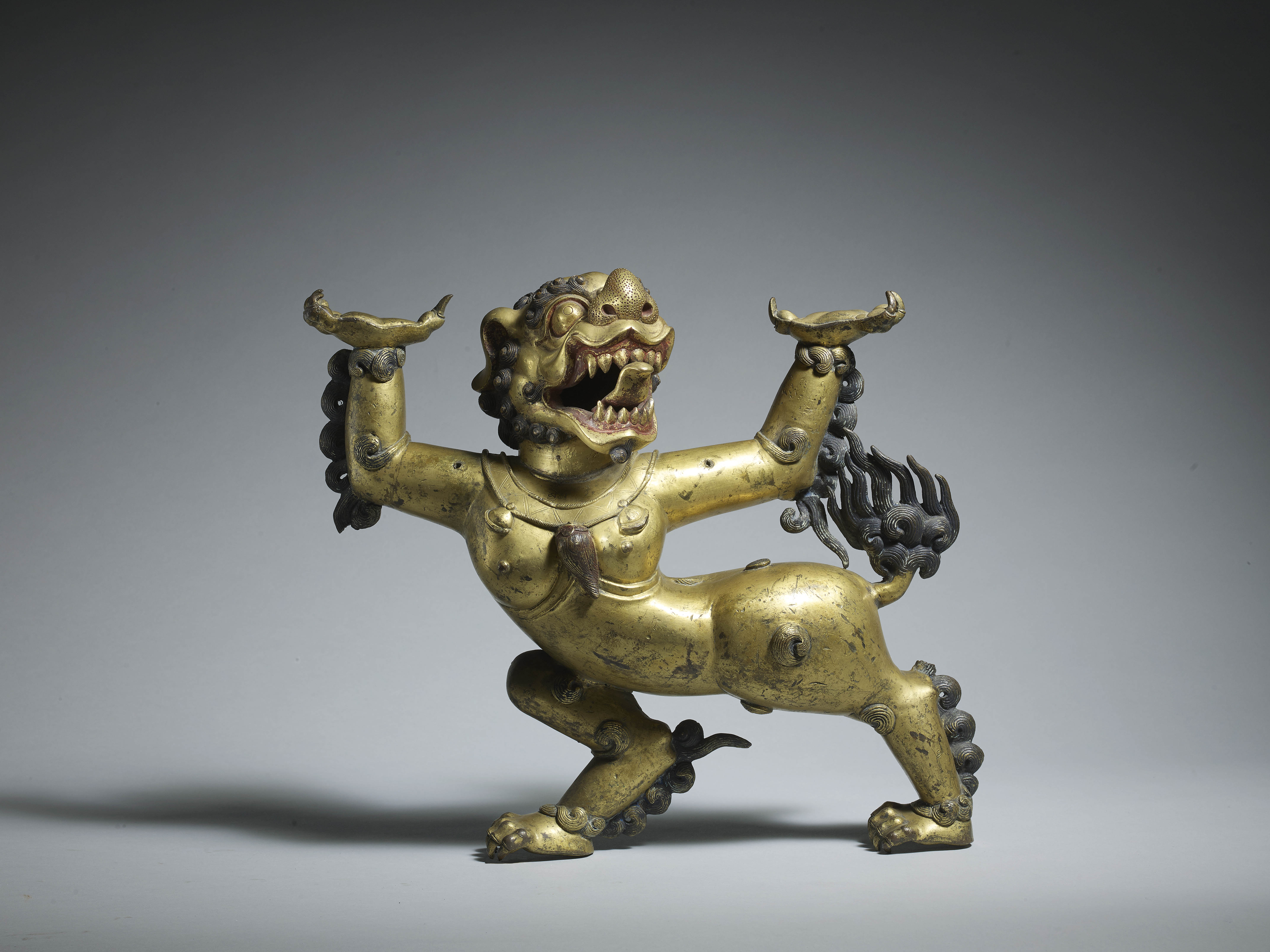 This cast metal snow lion is a fragment from a torana, an ornate throne-back that would have supported a Buddha or Bodhisattva figure. The throne-back would have been composed of six elements stood one on top of the other and mirrored on either side to form an oval-shaped frame for the central figure. The six elements on this style of throne-back are, from the bottom, a pair of elephants, snow lions, horses (often with a rider), Makaras (water creatures), nagas (creatures with a human torso and the lower body of a snake), and, on the top and in the centre of the throne back, a single garuda bird. In this case all of the components including the central figure would have been similarly cast and gilded. It is clear that this snow lion was once a part of a monumental structure.

A small number of snow lion torana fragments of varying quality have made an appearance at auction, while a similar, but ungilt, snow lion can also be found in the Rubin Museum of Art collection. Most of these examples have all been dated to around the 17th century or later because it is during the 17th century that the six-element style of throne becomes a common depiction in Tibetan thangkas. However, as evidenced in cave paintings at Ajanta and Ellora, this style of throne was popular in Pala India and therefore likely introduced to the Himalayan region during the Gupta period.  The snow lion fragment is also comparable to a similarly sized 15th century copper alloy Garuda fragment (Bonhams New York, Indian, Himalayan & Southeast Asian Art sale, 14 March 2016, lot 37), with both fragments share a roundness in the modelling of the figures, as well as a similar articulation of hair and fur.

This piece shares strong stylistic affinities with sculptures known to have been made for Densatil Monastery between the late 14th and early 16th century, which indicates a connection to the Densatil artistic tradition. These stylistic similarities include the round modelling of the snow lion, the sturdy and heavy casting, as well as the rich colour of the gilding.  While the  constuctio of the eight famed tashi gomang stupas of Densatil was completed in the 1430s, it is believed that the monastery continued to patronise artistic production until the early 16th century.

The fine detailing of the snow lion’s mane, tail as well as the expressive qualities in the rendering of the face, show that this is an exceptional example of Tibetan craftsmanship. It is clear that this snow lion fragment was once the part of a monumental throne.