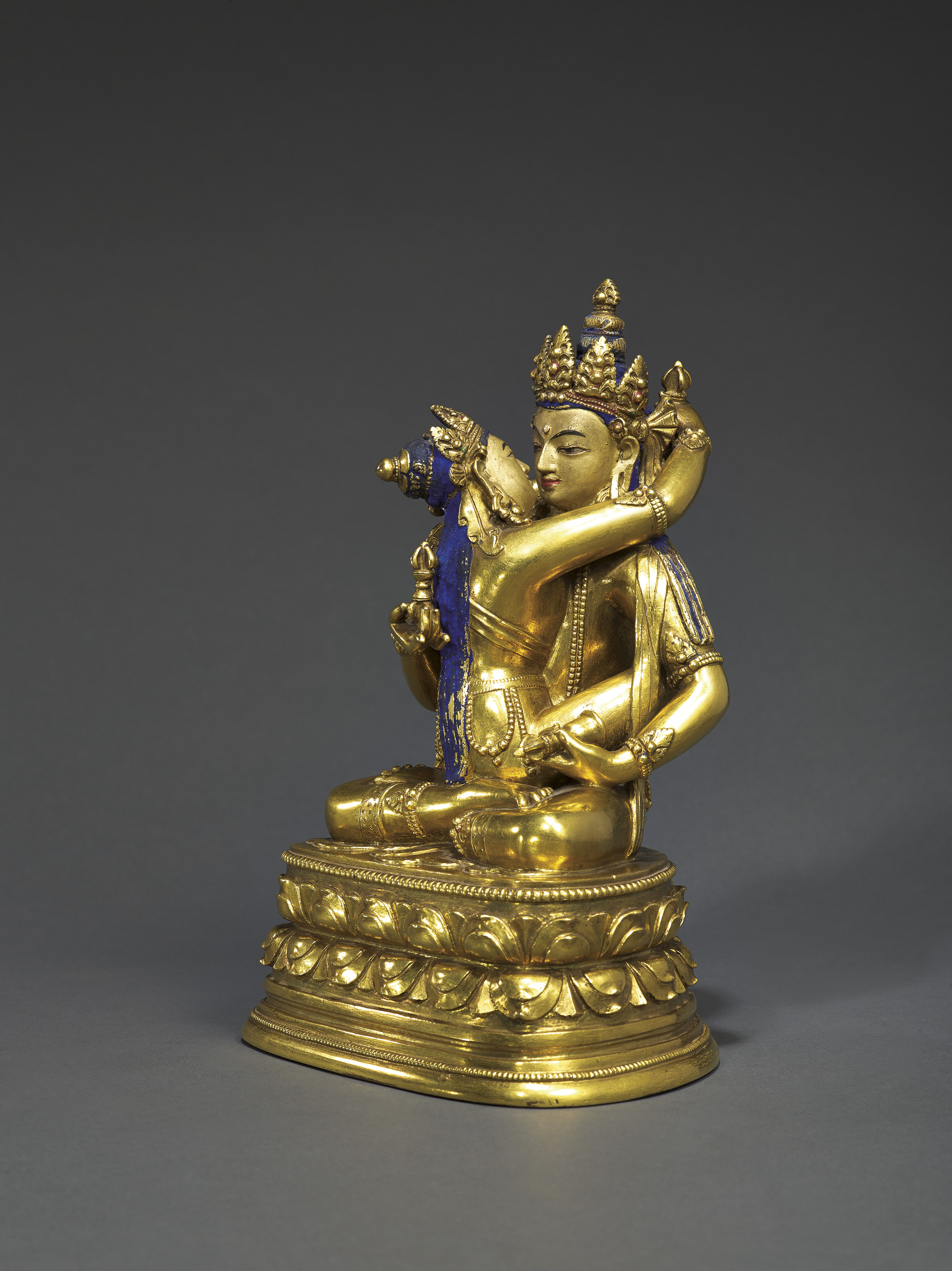 In the Mahayana, the name Vajrasattva bodhisattva translates as Diamond Mind or Thunderbolt Mind. He is considered to be the sixth directional Buddha, though he is always represented as a crowned and adorned bodhisattva. Often presented in Tibetan paintings as the progenitor of a lineage, he also has independent shrines, especially in Nepal.

Seated on a double-lotus base, Vajrasattva embraces his consort (shakti), whose legs wrap around his waist while her arms tightly enfold him. He holds a vajra in his right hand and a bell in his left, whilst his partner holds a chopper in her right hand and skull bowl in her left. He wears diaphanous robes with patterned hems and is adorned with beaded jewellery and a sash draped over his shoulder.

Vajrasattva’s face, with elongated eyes beneath finely arched brows centered by an urna and surmounted by an elaborate five leaf-shaped diadem, is flanked by large pendant earrings. The hair is arranged in a high chignon topped by a foliate finial, with two locks cascading down his shoulder. His legs are in the meditative posture known as vajraparyanka. Vajrasattva was usually depicted as single figure; this image, in which vajrasattva holds his shakti, is rarely seen.

The shakti wears a leaf-shaped crown, a beaded necklace, armbands, bracelets and ornaments, with her hair arranged in a tall chignon. The couple gaze intently at each other, the union of Vajrasattva and his consort being a metaphor for the desired result of tantric meditation. The base is sealed and incised with an elaborate double-vajra (viśvavajra).

Zanabazar (1635–1723) was one of the most significant Asian artists. He distinguished himself in numerous other disciplines such as politics, engineering and literature—similar to the great Renaissance masters such as Leonardo da Vinci and Michelangelo. He derived inspiration for his sculptures from medieval Nepalese and eastern Indian images that were housed and revered in the Tibetan monasteries he had visited, but transformed and revitalised by a great and innovative master. Although his pictorial oeuvre seems to be completely lost, a small number of sculptures are attributed to him. Stylistically, his sculptures are finished to a high degree, finely detailed and with lustrous gilt surfaces. They are possessed of a serene fluidity, with delicate features yet vibrantly realised bodies.

This is a superb example of the style of Zanabazar: relatively large scale, richly gilded and finely modelled with smoothly graded contours and exquisitely embellished details, imparting a sense of naturalness and vitality.