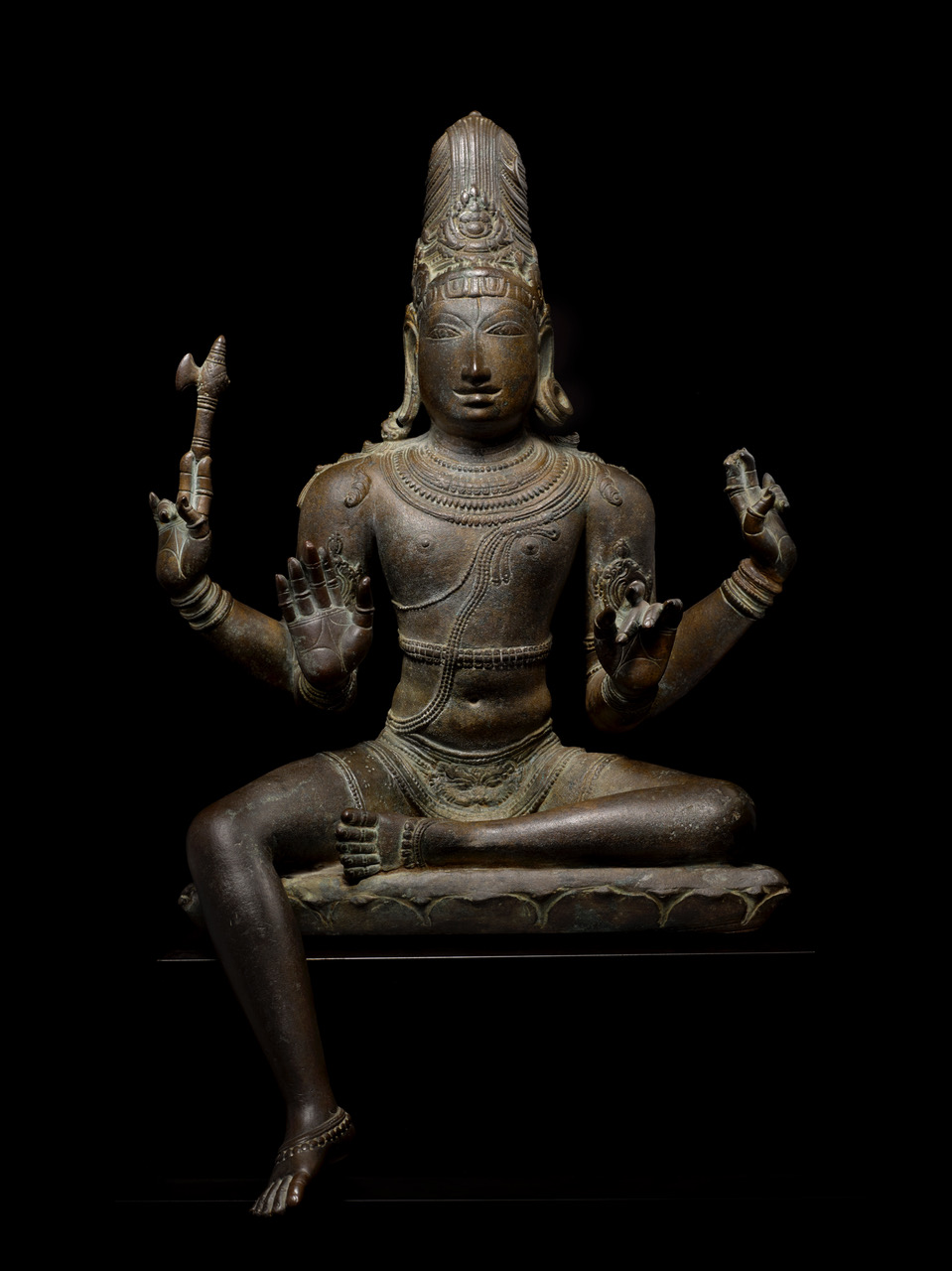 Originally part of a Somaskandamurti group depicting Shiva with his wife, Parvati, and son, Skanda, the broad-shouldered four-armed god is seated in lalitasana (the posture of royal ease).  With his hands he holds the antelope (now missing), symbolizing the soul longing to reach Shivahood, and displays abhayamudra, granting it divine protection.  With varadamudra, he gently invites the soul to seek release from ignorance, while his axe embodies the power to cut through its fetters.The majestic deity’s powerfully-rendered torso is adorned with necklaces and a sacred thread, and his short veshti  is secured at the waist with an ornamented girdle.  His handsome face bears a deeply meditative expression with large eyes, an aquiline nose, and a third eye on the forehead.  The elaborate armlets and other ornaments are finely rendered, and he wears two differently-shaped earrings: the earring on the right is a makara, which is usually worn by men, and on the left is a round disk (patrakundala) usually worn by women.  This combination suggests that all of creation, including male and female, is an emanation of the god.  His ornate crown has a sirischakra on the reverse and a five-pronged keyura medallion at the center.  Compare a similar example from the  Nelson-Atkins Museum of Art published in Johannes Beltz and Saskia C Kersenboom-Story, Shiva Nataraja: der kosmische Tänzer, Museum Rietberg, Zürich, 2008, no. 25.The Chola period is noted for its unparalleled cultural and artistic achievements and is widely considered to be a ‘golden age’ in Indian history.  Shiva, the great Ascetic God, was adopted by the Cholas as their patron deity or kulanayaka, and the Chola emperors constructed numerous temples and shrines dedicated to Shiva throughout their lands.  Revered as the Supreme Transcendental Being, Shiva is one of the principal deities in the Hindu pantheon along with Brahma (the Creator) and Vishnu (the Preserver).