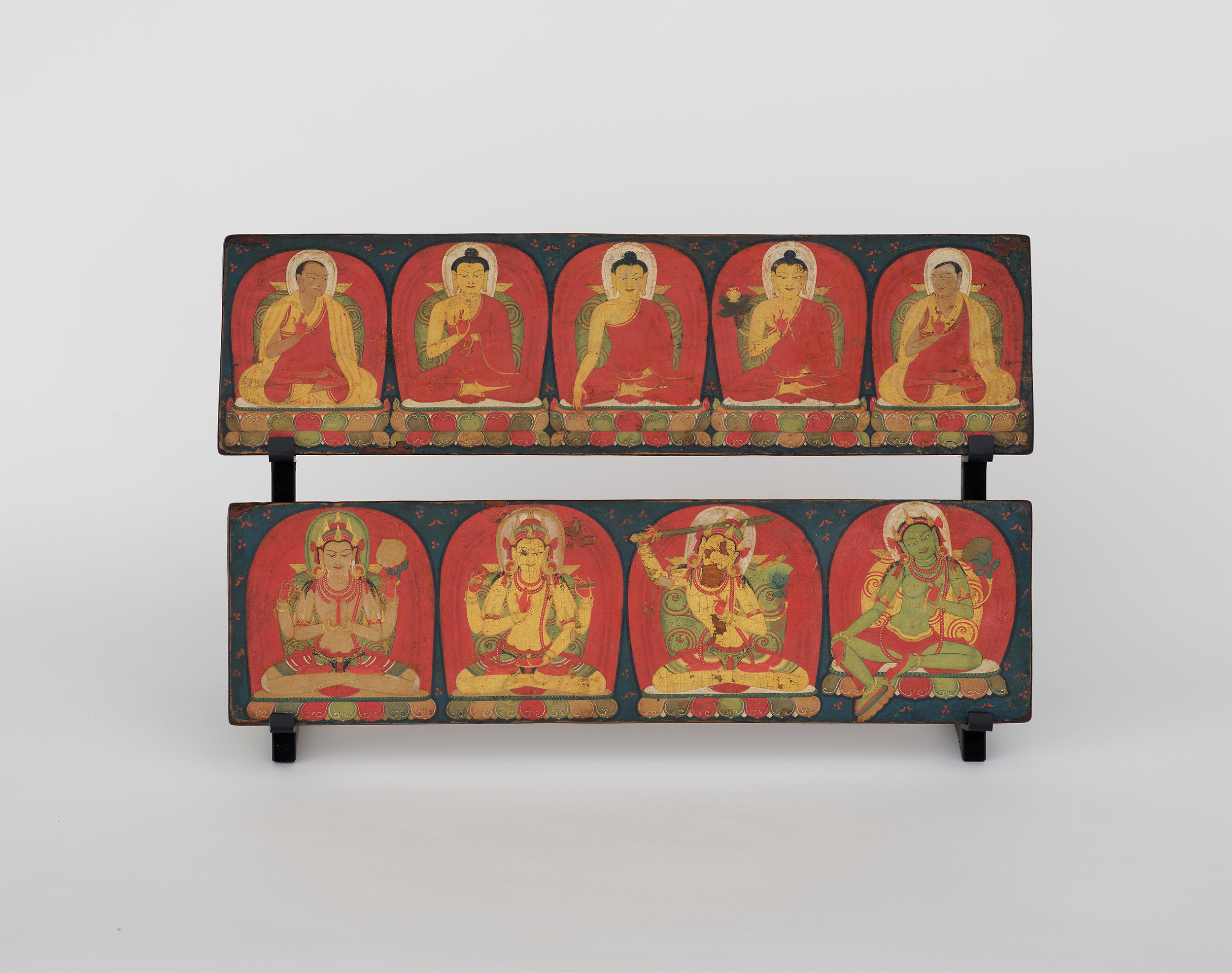 It is difficult to underestimate the importance to Tibet and the Buddhist faith of these types of classical manuscript covers. As objects that once acted as the entrance to, and enabled the protection of, sacred Buddhist texts, they are regarded as part of the Dharma (the Teaching), and as such to be revered as greatly as one would the Buddha. This manuscript cover would have been specially commissioned by a monastery or wealthy family to protect a sacred text of the Buddhist canon. This cover was fashioned from hardwood, a material difficult to obtain in Central Tibet, and no expense was spared in their construction. In this case both manuscripts were carved and painted on their outer side, and the inside was painted.

Tibetan manuscripts, whose format was inspired by Indian palm-leaf manuscripts, were originally contained between two wooden covers, which in turn were wrapped in cloth to protect them. These wooden covers were often richly decorated, with the designs and iconography often indicating the contents of the scripture they contained.

It is rare to find manuscript covers that must have come from the same set. Given their matching size and similar style, it is likely that these two manuscript covers were part of a set commissioned together – most sutras were split over multiple books, the order of which was usually indicating by marking the short sides of the covers with a corresponding letter of the Tibetan alphabet.

The first book cover features a painted design on the inside depicted three Buddha figures flanked by two Indian monks. The carved outer side features the five Tantric Buddhas, identified by their hand gestures. These are from left to right: Ratnasambhava, with right hand in varada mudra, Akshobhya with hands in bhumiparsha mudra, Vairocana with hands in dharamcakra mudra, Amitabha with hands in dhyana (meditation) mudra and Amoghasiddhi with hand in abhaya mudra.

The second book cover features a painted design on the inside cover depicting, from left to right, Chaturbhuja Avalokiteshvara, Prajnaparamita, Arapachana Manjushri, and Green Tara. The outside carved side features at its centre Achala, who is set amongst foliate patterns.