Extraordinary stone sculptures, bronzes and paintings from China, India, Mongolia, Nepal and Tibet will be amongst the fine Asian works of art on Rossi & Rossi’s stand 162 at TEFAF Maastricht, the world’s leading art and antiques event, which will be held at the Maastricht Exhibition and Congress Centre (MECC) from 10 to 19 March 2017.

Examples on display will include an exquisite late 17th- to early 18th-century Mongolian gilt copper sculpture of Chagan Sambhar-a with painted details (Fig. 1). Originally exhibited by Rossi & Rossi in Treasures from Mongolia: Buddhist Sculpture from the School of Zanabazar – on view from 28 March to 4 April 2004, and published in the accompanying catalogue – the work is now back on the market. Samvara, Sanskirt for ‘obligation’ or ‘vow’, is a popular tutelary for patron deities of Tibeto-Mongolian Buddhism. Though typically shown in his wrathful form, with twelve arms and four heads, Sitasamvara, the White Samvara, is depicted here in his benevolent form. Seated on a double-lotus pedestal, the deity has two arms and one head, and embraces his consort, Vajravarahi – their union symbolising the merging of compassion and wisdom. Sitasamvara holds two vases filled with the elixir for immortality while Vajravarahi clutches two skull cups. Both deities are beautifully crowned, coiffed and bejewelled. Traces of paint remain on their hair and faces, highlighting their full lips and gently curving eyelids. At 24 cm (9 ½ in) in height, this is a relatively large example of Mongolian bronze production, and is in excellent condition.

A ca. 14th-century gilt copper alloy sculpture of the Medicine Buddha (Fig. 2, Bhaisajyaguru) from Tibet or Nepal will also be on display at the gallery’s stand. Seated in dhyanasana on a double-lotus base, the figure wears the simple robe of a Buddhist monk (with a beaded and incised border) that clings to his body. The deity’s right hand extends over his right knee in vara mudra (the mudra of giving), and he holds a single myrobalan fruit between his thumb and index finger; his left hand, on his lap, contains his key attribute: a jar of medicinal nectar. According to Tibetan Buddhism, worshipping the Medicine Buddha is not only a very powerful method of healing as well as increasing the healing powers both for oneself and others, but also a way to overcome the inner sicknesses of attachment, hatred and ignorance. At 34 cm (13 ½ in) in height, this is a fine example of the Himalayan tradition of gilt-copper casting.

On view from the central region of Tibet will be a significant painting on cloth once identified – according to an inscription on the work – as the lama Sakya Chogyal Pakpa (1235–1280). However, research has shown that this early 15th-century thangka actually depicts the gifted translator Sabzang Pakpa Zhonnu Lodro (1358–1412/24) (Fig. 3). In the work, Zhonnu Lodro (‘youthful intelligence’) is depicted as an elderly man with a bald crown and a receding grey hairline. He holds both of his hands at his heart, in a teaching gesture, the dharmachakra mudra, and clutches the stems of two flowers that blossom above each shoulder and support a Vajra sceptre and bell, respectively. He wears the red and yellow patchwork robes of a fully ordained monk (bhikshu), a red monastic shirt and a large meditation cloak that completely covers his shoulders and legs. Behind the figure of Zhonnu Lodro is a decorative wooden throne, common to the Palkor Chode Monastery of Gyantse, Tibet. The top is further adorned with phoenix heads and flaming jewels. At the top centre of the composition, directly above the head of Zhonnu Lodro, is his principal teacher, Sabzang Mati Panchen Lodro Gyaltsen (1294–1376). Connected to the throne by a band of rainbow light, at the upper left, is Togme Zangpo (1295–1369). At the upper right side is Jangchub Tsemo (1303–1380), with a long white beard and a pandita hat; at the bottom right side is a small figure of Panjarnata Mahakala, the principal protector deity of the Sakya tradition of Tibetan Buddhism; and at the left side is a kneeling donor figure holding up a flower in each hand. The work was exhibited, published and sold by Rossi & Rossi in 1994, when the central figure was initially identified as Sakya Chogyal Pakpa. The work was also exhibited between 1996 and 1997 in a revised version of Wisdom and Compassion: The Sacred Art of Tibet, which was organised by Tibet House, New York. The revised exhibition travelled to Fundacion la Caixa, Barcelona; the Tobu Museum of Art, Tokyo; the Yamaguchi Prefectural Museum, Yamaguchi City; and the Chiba City Museum of Art; Chiba.

Also on offer will be a selection of Indian and Gandharan sculpture, including an early, 10th- to 11th-century Pala schist stele of the Buddha Shakyamuni from East India (Fig. 4). Acquired in the early 1960s by a private German collector, the work entered the collection of Thomas Freitag in Cologne before 1972, and has been in a private Dutch collection since the late 1990s. Seated on a double-lotus base in dhyanasana pose, the Buddha places his left hand on his lap in a meditative gesture, while holding his right hand in the earth-touching gesture, bhumisparsha mudra – this gesture symbolises the key moment at Bodh Gaya, when the Buddha called upon the earth to bear witness to his enlightenment. A carved parasol of Bodhi leaves shades his head. The Buddha has a serene expression and downcast eyes; his lips are upturned in a gentle smile. His enlightenment is shown through the stylised, flaming nimbus around his head. The deity is flanked by two stupas, placed on the architectural throne back, which, in turn, is supported by two flanking leogryphs. He wears simple, Sarnath-style robes that drape over his left shoulder and arm – leaving the right side exposed – and fall to his ankles. At 61 cm (24 in) in height, this is a relatively large stone sculpture from the early Pala period.

Rossi & Rossi will also be exhibiting a number of paintings from China and Tibet, including a 17th-century Sino-Tibetan painting depicting Arhat Vanavasin (Fig. 5). Here, Vanavasin is shown in his usual iconographic form: making a pointing gesture with his right hand and holding a fly whisk in his left. He is dressed in a red and blue patchwork robe featuring rich brocade patterns. To his right stands a lay attendant holding a scholars’ rock, and at the top centre of the composition is the Buddhist meditational deity, White Tara. The painting would have been part of a set representing the Sixteen Great Arhats, as well as the Buddha Shakyamuni, the attendant Dharmatala, the patron Hvashang and the Four Directional Guardian Kings. The set of paintings to which this work belongs was almost certainly based on an earlier group of Chinese imperial workshop paintings dating from the Yongle period (1403–25) depicting the same subject. Later Tibetan artists likely created numerous sets of arhat paintings based on Yongle period examples. The colour and contour of the present work’s landscapes show a clear affinity with the classical blue-green style of painting that can be traced back to the Tang period (618–907). 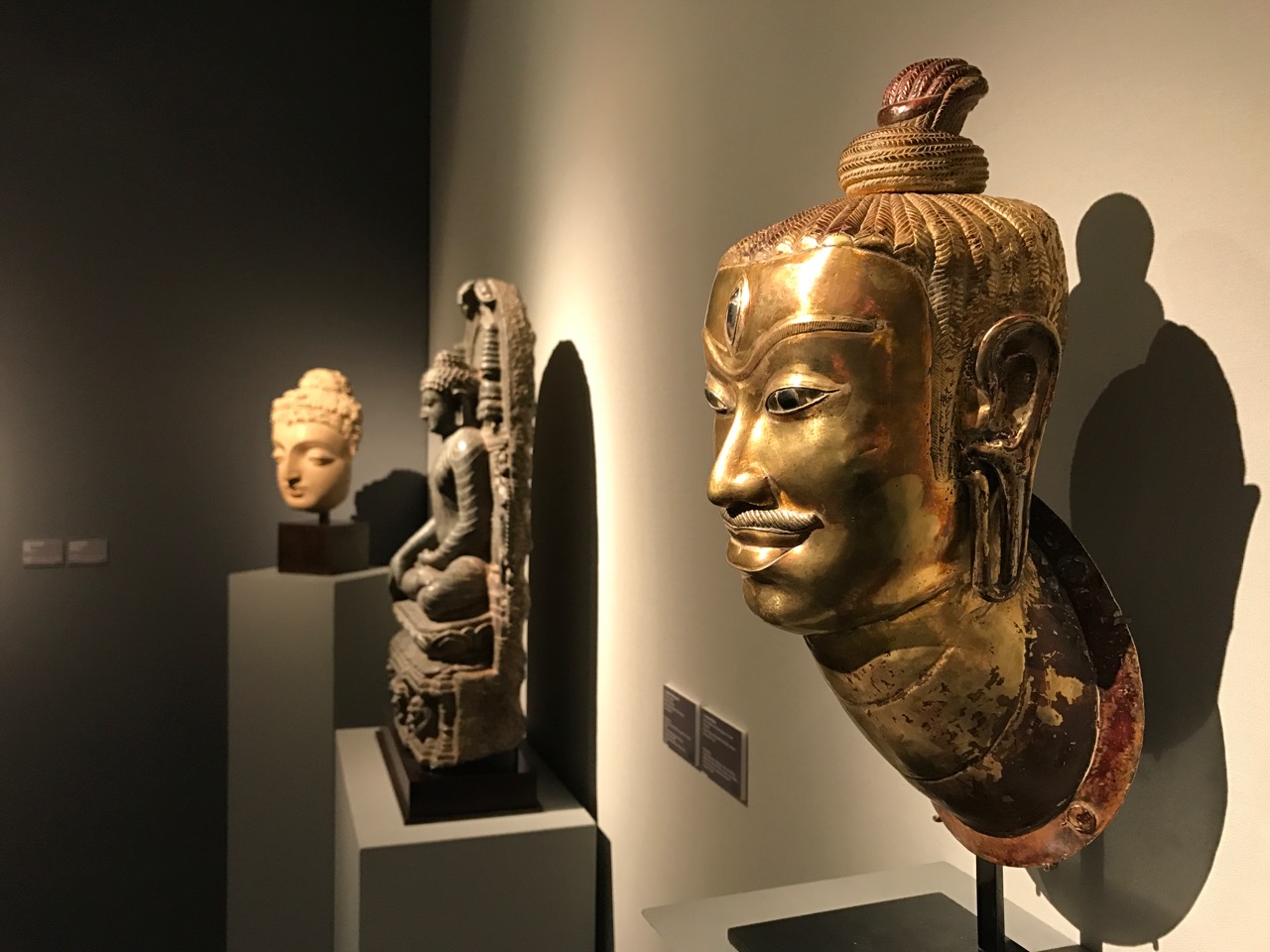 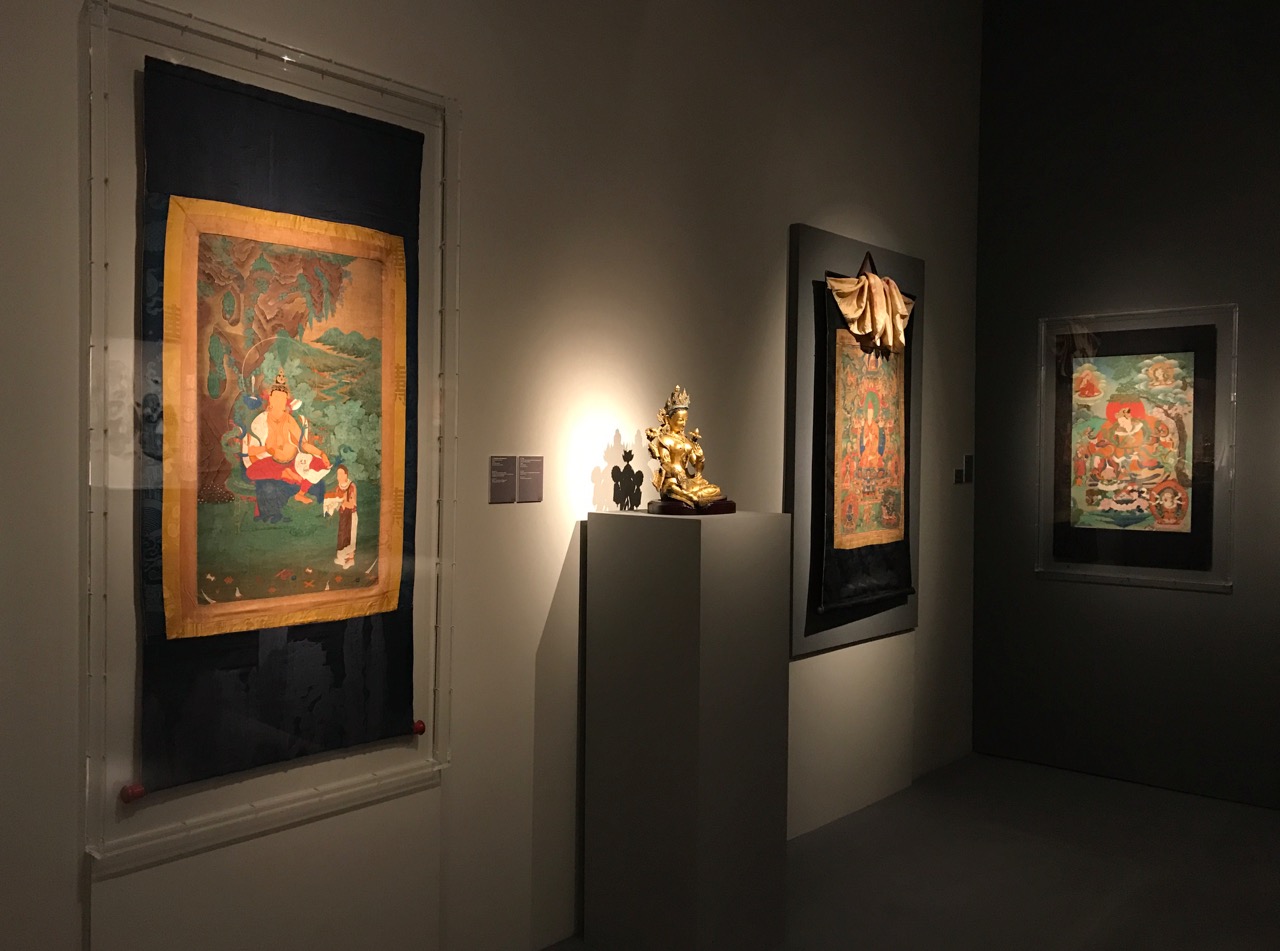 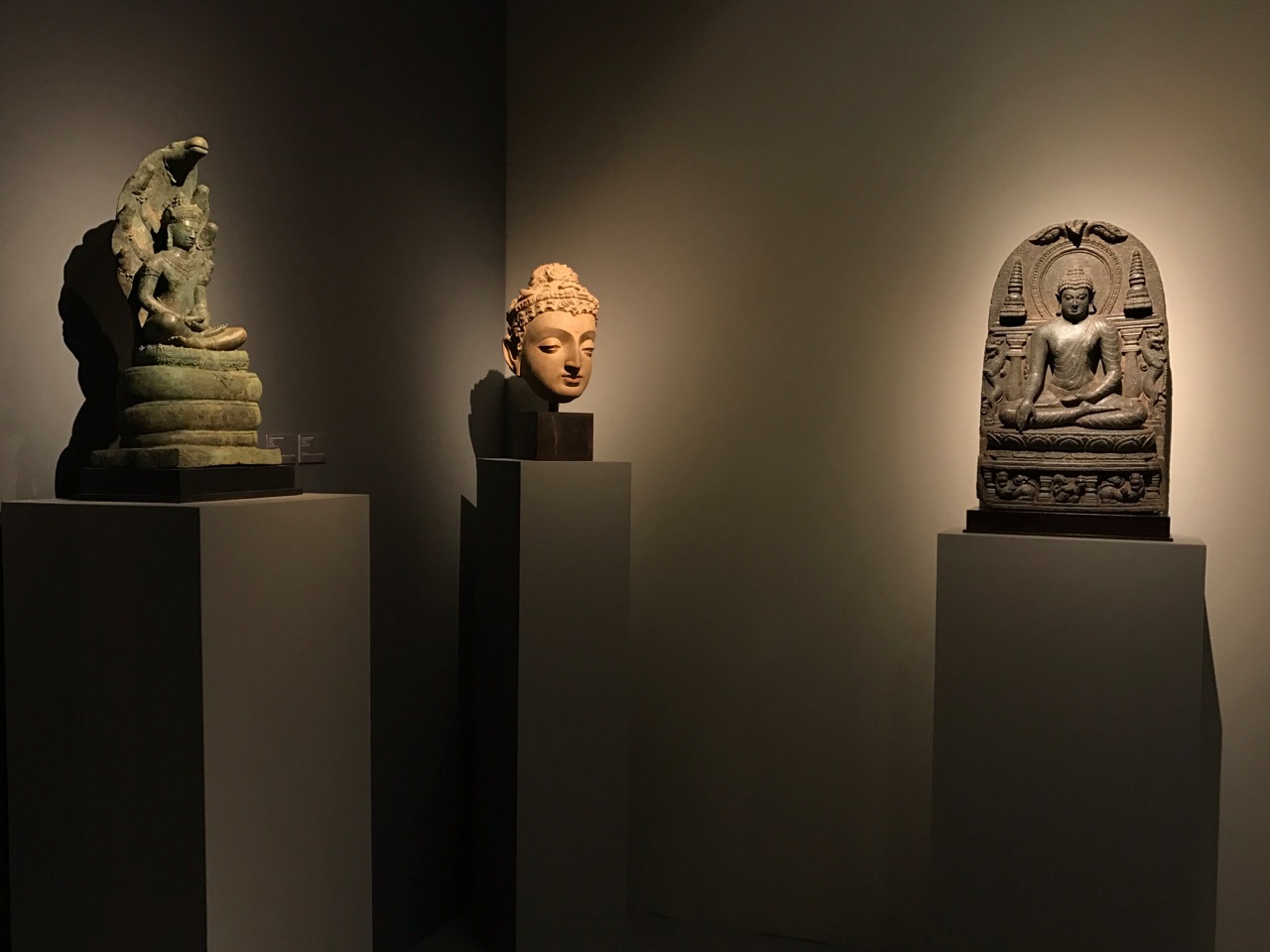 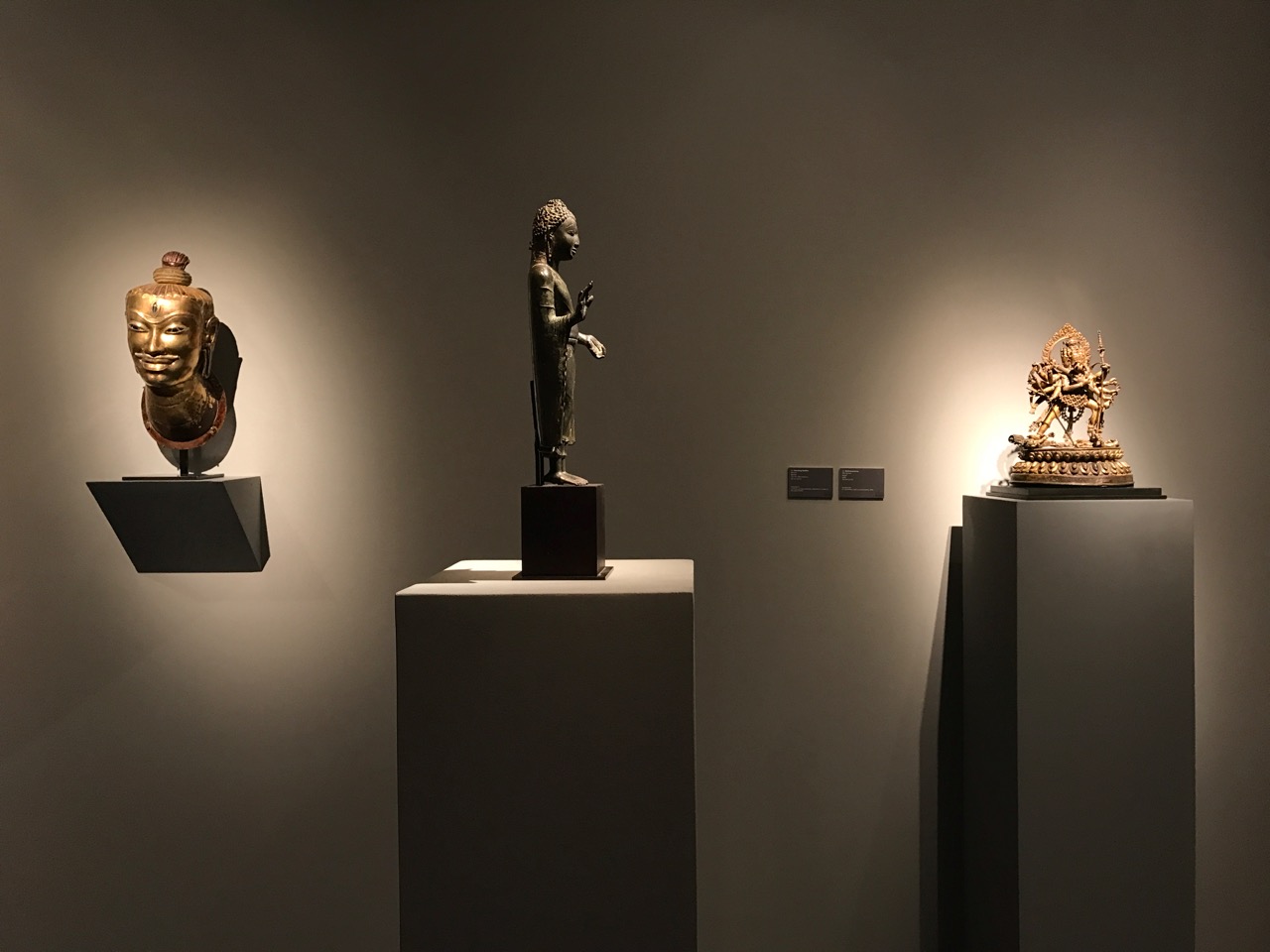 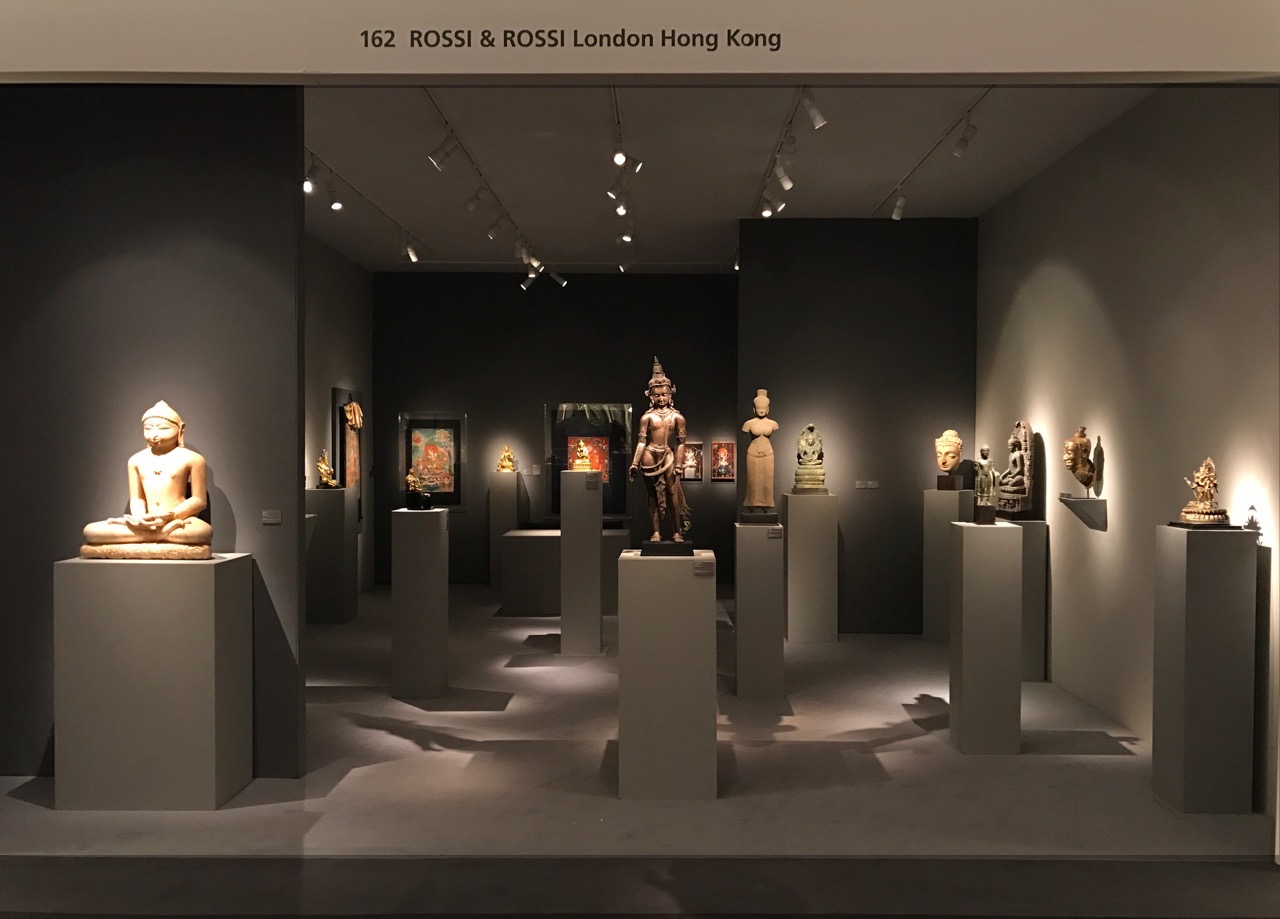 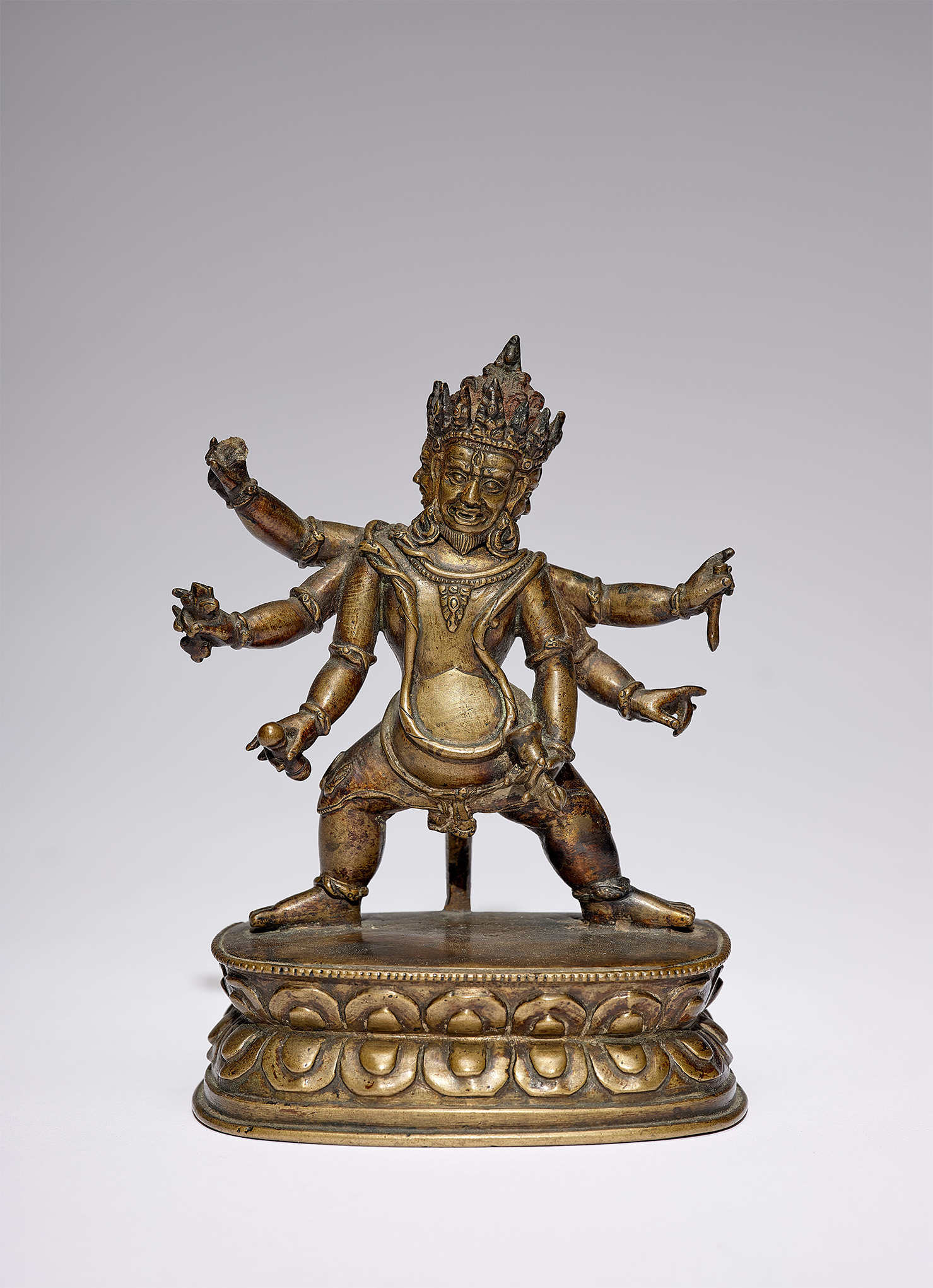 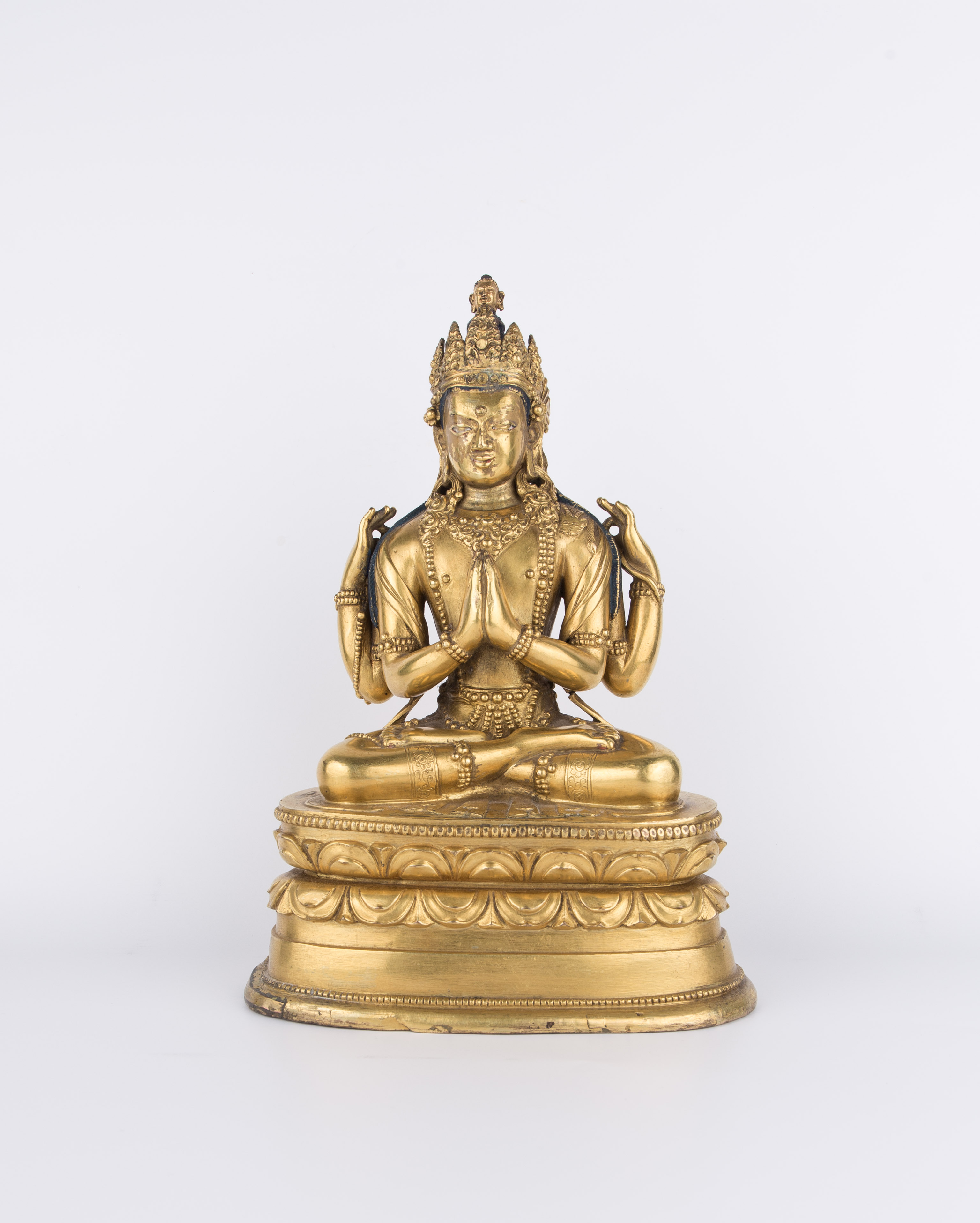 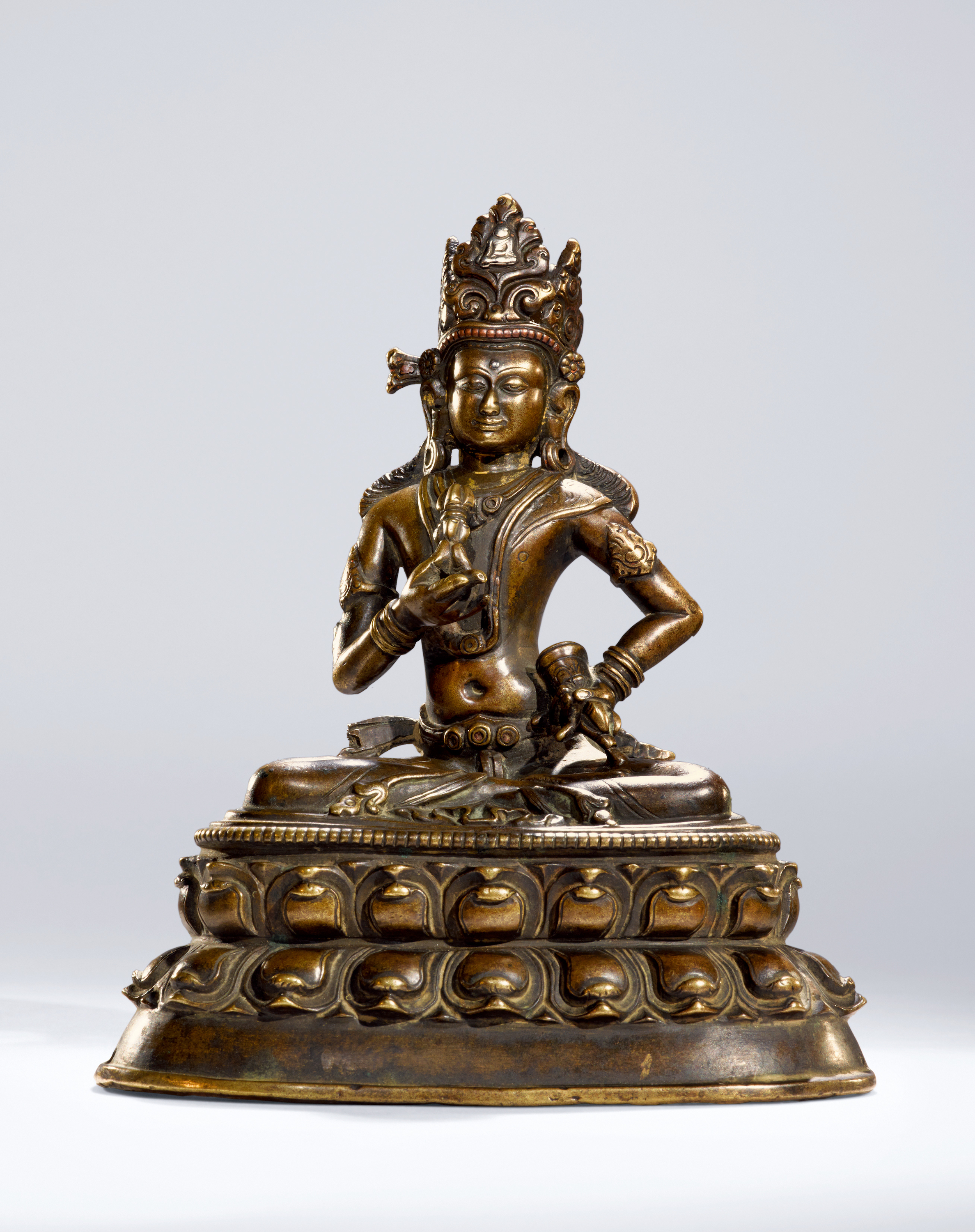 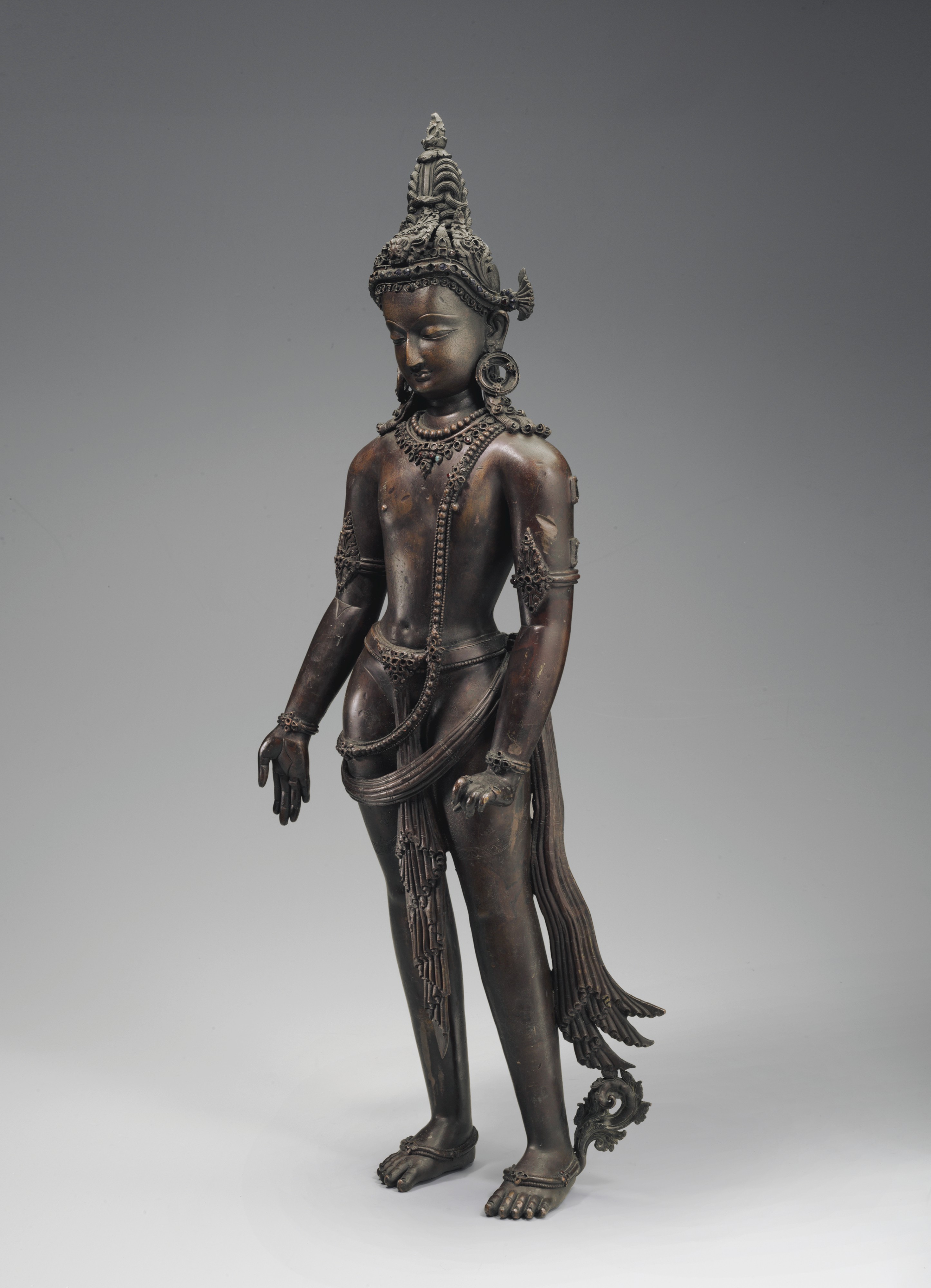 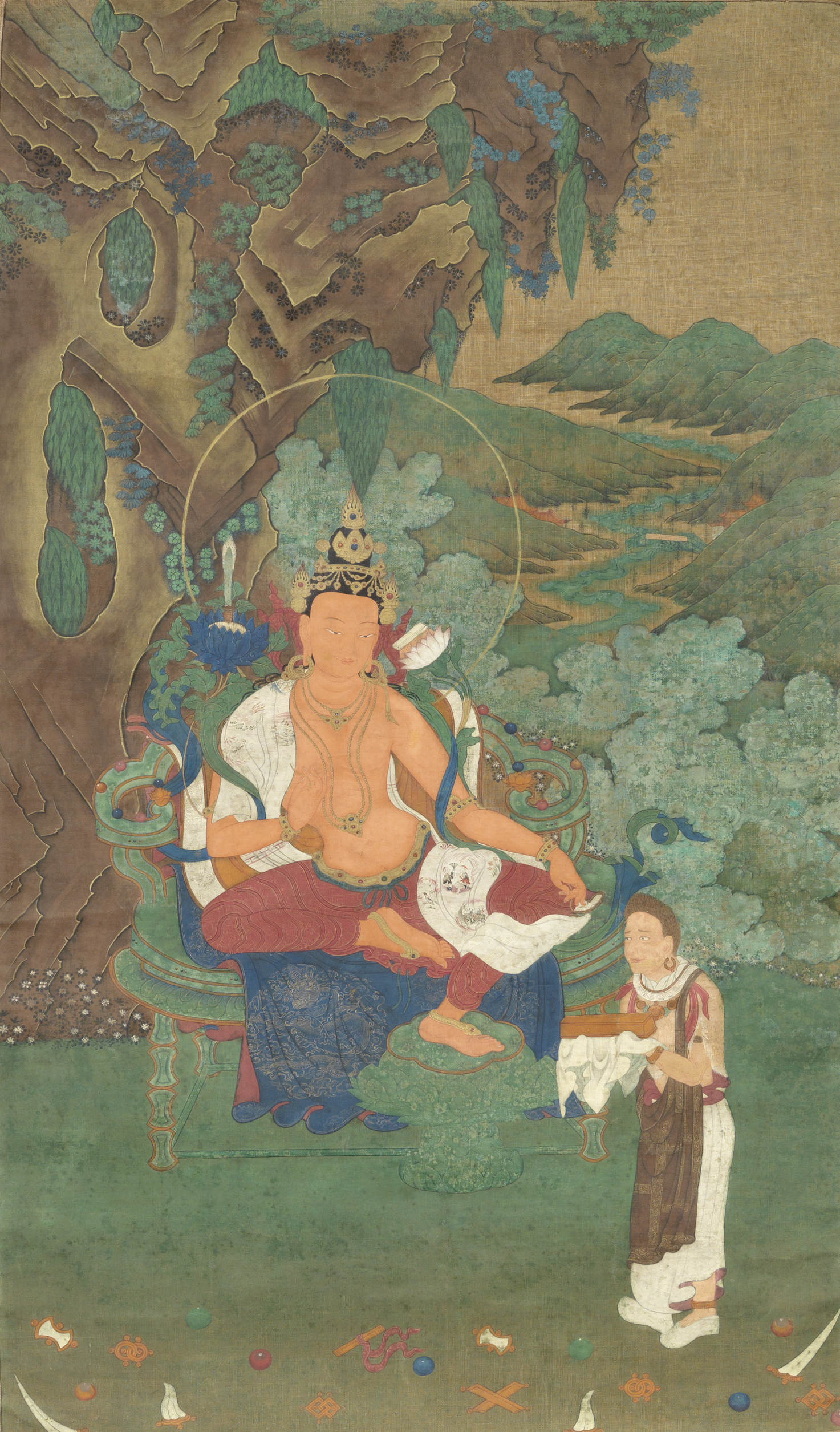